Judas and the Black Messiah, Minari, The Mauritanian and more 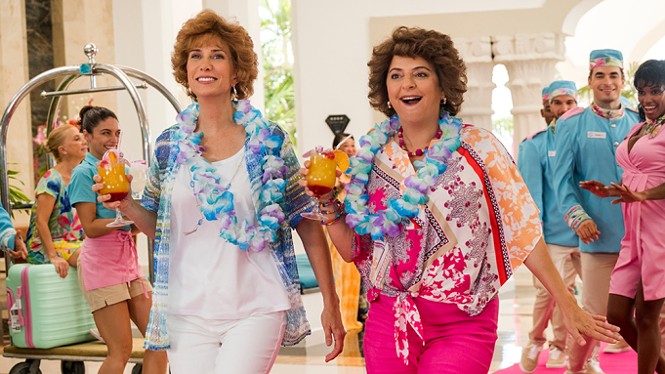 Barb & Star Go to Vista Del Mar ***
Surreal endeavors like this should be referred to as “mood comedies”—I can easily understand someone checking out early, but man was I apparently in the right mood for it. Annie Mumolo and Kristen Wiig co-wrote and co-star as Barb and Star, two permed and culotte-wearing best friends from Soft Rock, Nebraska who work together, finish each other’s thoughts and even moved in together after they were respectively widowed and divorced. After they lose their jobs, they decide to take their first-ever vacation together to a Florida resort town—where, unfortunately, someone is planning to release genetically-modified mosquitoes to kill everyone. The wavelength it’s operating on feels similar to that of the Austin Powers movies by Wiig’s fellow SNL alum Mike Myers, right down to Wiig also playing the role of the pasty-faced villain. And the gags are often a dopey delight, including a piano-lounge singer obsessed with boobs, Morgan Freeman doing a voice cameo as a philosophical crab, and a charmingly game Jamie Dornan busting out in a full-on overly-literal musical number. Of course not every joke is going to land, and our flatly good-natured heroines might not feel like enough to carry a feature. But by the time they turn the realization that they both love the name “Trish” into a full biographical profile of Trish, I was hooked. Available Feb. 12 via VOD. (PG-13)

Judas and the Black Messiah ***1/2
It took a little time to process the different ways in which both sides of the title in Shaka King’s fact-based story are not entirely accurate, and how that idea deepens the story. In 1968, small-time criminal William O’Neal (LaKeith Stanfield) is recruited by the FBI to infiltrate the Illinois Black Panther Party, and get close to its chairman, Fred Hampton (Daniel Kaluuya). Understandably, the primary arc involves the apolitical O’Neal becoming radicalized by virtue of his experience within the Black Panthers, and Stanfield’s performance walks a fascinating line in what parts of his life were becoming performance, and what parts authentic. But it’s just as compelling watching Hampton, as he stands on the precipice of fatherhood, contemplating the potential consequences of his most incendiary rhetoric, just as the FBI closes in on him. King’s direction doesn’t ignore either the violence perpetrated against Black Panther members or the violence perpetrated by them, and only really gilds the lily in a scene where O’Neal’s FBI handler (Jesse Plemons) meets with J. Edgar Hoover (a miscast Martin Sheen). The complexities percolate throughout the scene documenting one of Hampton’s most infamous speeches—one man at the peak of a rage that might have diffused, another man building a rage that he might never have had without the government’s prodding. Available Feb. 12 in theaters and on HBO Max. (R)

Land ***
There’s nothing particularly groundbreaking about a story of someone fleeing into nature to escape psychic wounds, so it’s really all about the execution. First-time feature director Robin Wright, working from a screenplay by Jesse Chatham & Eric Dignam, finds a satisfying number of grace notes in the story of Edee (Wright), a woman who abandons her previous life after a family tragedy and flees into the remote mountains of Wyoming. There she eventually encounters Miguel (Demián Bichir), a man with his own troubled history who becomes Edee’s mentor in living off the land, and most of what works best here involves their growing friendship. The small moments between them have to carry a lot of weight, especially when it’s always clear that the primary character arc here will be Edee deciding whether she wants to embrace life again. As a director, Wright leans into the majesty of the landscape, with magic-hour lighting and an appropriately disorienting sense of the passage of time being indicated only by the changing of the seasons. While the drama might tend towards the lowest of low-key, there’s still an emotional resonance to someone offering his kindness to another because “you were in my path.” Available Feb. 12 in theaters. (PG-13)

Leona ***
The parts of this narrative that feel familiar at the outset actually contribute to what makes it feel distinctive by the end. At its core, it sets up as a “forbidden love” story: 25-year-old artist Ariela (Naian González Norvind, part of the Mexico City Jewish community, begins dating non-Jew Iván (Christian Vazquez), setting her on a path towards conflict. In the expected version of this narrative, Ariela spends a lot of time dodging the truth before getting caught, but here Ariela’s relationship with Iván is discovered relatively quickly. The result is something that spends a lot of time on the pressures exerted on Ariela—from her mother, her rabbi, even a stranger who comes off as vaguely threatening—to conform or risk ostracism. The low-key performance by Norvind (who also co-wrote the screenplay with director Isaac Charem) explores the many ways Ariela chafes under the expectations of her community, and the narrative always seems to take a slight turn from where you expect it to go; even the “bad dates” montage has a slightly different pacing before abruptly finding Ariela on an actual good date. At times, it feels like a bit more context around the community itself would deepen the emotional stakes, but what ultimately evolves is an empowerment tale with enough subtlety and creativity to dodge clichés. Available Feb. 12 in theaters and at SLFSatHome.org. (NR)

The Map of Tiny Perfect Things **1/2
It’s a young-adult spin on Groundhog Day that makes sure you know it exists in a universe where Groundhog Day is the frame of reference to what’s going on, but self-awareness alone doesn’t provide a justification for repetition. Screenwriter Lev Grossman adapts his own short story about Mark (Kyle Allen), a teenager who has for some time been aware that he’s reliving the same day over and over, with nobody else seemingly in the same loop—until he meets Margaret (Freaky's Katharyn Newton), and the two become partners in chronicling the small moments of bliss in the day they’re stuck in. Beginning with Mark already having gone through his realization of this strange situation makes last year’s Palm Springs a more apt analog than Groundhog Day, and the early scenes find some charm in Mark’s loosey-goosey acceptance of existing without real long-term consequences. The inevitable possible romance does take over, of course, and Newton’s somewhat mysterious character builds the question of what Very Important Lessons our young people will learn from their experience. The journey toward that point is cute enough, if never distinctive enough to make your forget that it’s standing on the shoulders of one giant groundhog. Available Feb. 12 via Amazon Prime. (PG-13).

The Mauritanian **1/2
I’ll be honest: I have no idea what the idea way is to represent torture on screen. I only know when it feels … off. Director Kevin Macdonald adapts the memoir of Mohamedou Ould Slahi (Tahar Rahim), a Mauritanian national imprisoned at Guantánamo Bay in 2002 on suspicion of his involvement in the 9/11 terrorist attacks, and held without charges for years. The narrative also follows the two attorneys involved in his case—Slahi’s own attorney, Nancy Hollander (Jodie Foster), and military prosecutor Stu Couch (Benedict Cumberbatch)—and while quite a bit of screen time is devoted to them, it’s to the film’s credit that it never attempts to center the conscience-stricken white people learning about “enhanced interrogation.” Rahim’s performance is complex enough to provide initial uncertainty as to his guilt or innocence, while Macdonald shoots the prison itself as an intimidating presence even to those who are simply visitors. But eventually, the narrative needs to convey the specifics of Slahi’s ordeal, and here things get messy. Macdonald employs slow-motion, jarring angles, hallucinatory edits and theatrical lighting, all of which might capture Slahi’s tormented state of mind, but also serves to aestheticize his brutalization. While it might be hard to get viewers to stare this ugliness square in the face, it feels like a way of evading what has to be confronted. Available Feb. 12 in theaters. (R)

Minari ***1/2
Immigrant stories benefit from their specificity, and writer/director Lee Isaac Chung knows this deeply personal narrative so well that it feels rich with soul. In 1980s Arkansas, a Korean-American family—Jacob (Steven Yeun), Monica (Yeri Han) and their two young children—relocate from California, eventually joined by Monica’s mother (Yuh-jung Youn), for an opportunity to begin their own farm. While a drama based in such a setting could easily focus on the racism the family encounters, such moments are almost disconcertingly incidental. Instead, Chung digs into the parents’ challenges with deciding how and how not to assimilate into the local culture, seen largely through the eyes of 6-year-old David (Alan S. Kim). The relationship between David and his grandmother becomes the heart of the film—both Kim and Youn are tremendously appealing—with attention to the pleasures and the challenges of such multi-generational family dynamics. Chung doesn’t spare the lovely landscape images, and it’s perhaps one of the few missteps that presenting the setting as so bucolic undercuts the tensions faced by the characters. But Minari brings immense warmth to the way “othered” immigrants wrestle with homesickness, culture clashes and whether or not, to some people, they can never be “American” enough. Available Feb. 12 in theaters, via UtahFilmCenter.org and via A24 Screening Room. (PG-13)

Ruth - Justice Ginsburg in Her Own Words **
It’s not the fault of veteran Oscar-winning director Freida Lee Mock that 2018's RBG got there first, nor that Ruth Bader Ginsburg died prior to the release of this film—but those two things did happen, and neither one in the favor of this movie. As the title would suggest, Mock focuses on recordings of Ginsburg’s own public statements—in lectures, visits with elementary school students, pleadings before the court and her own Supreme Court decisions—which presents the inherent problem that speeches aren’t particularly cinematic, and Ginsburg herself not a particularly dynamic speaker even if she was a brilliant legal mind. And the material that made RBG so enjoyable—particularly the candid portraits of her daily routine, her friendship with the late Justice Antonin Scalia and her self-deprecating thoughts on becoming a pop-culture icon—is either not present here or already familiar. It’s also not ideal that Mock spends time on Ginsburg’s late-in-life health regimen, but is unable to really deal with the significance of her passing. There’s certainly a value to reinforcing Ginsburg’s legacy as a warrior for civil rights, and those who benefitted from her work. Unfortunately, we’ve seen what a more compelling version of this movie looks like. Available Feb. 12 via SLFSatHome.org. (NR)