The United States vs. Billie Holiday, Tom and Jerry, My Zoe, Night of the Kings and more 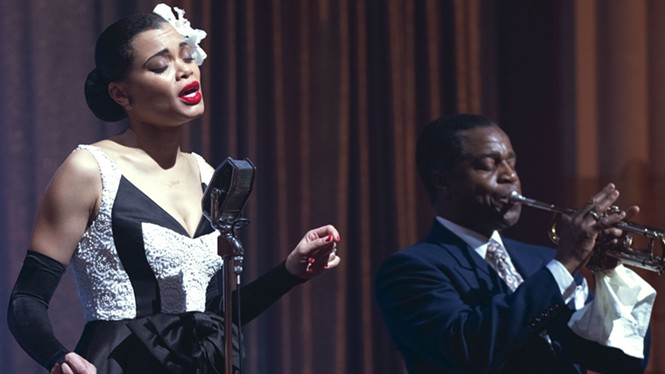 17 Blocks ***
As powerful as Davy Rothbart’s documentary is at times, it feels like one huge miscalculation keeps it from being monumental. Much of its impact comes from its scope: Rothbart meets 9-year-old Emmanuel Sanford-Durant and his 15-year-old brother Smurf on a Washington, D.C. basketball court, then proceeds to follow the family—including their mother Cheryl and sister Denice—for 20 years. Much of the drama comes from the patterns the family finds itself in—particularly Cheryl’s chronic drug abuse and Smurf’s life as a dealer—while Emmanuel in particular tries to find an alternate path. But Rothbart’s choice to open with a prologue that makes it clear tragedy will strike the family turns the first half of the movie into a waiting game for that tragedy, which affects everything we see even as the third act wrestles with the fallout. Several individual moments drive home the horrifying idea that this community so near the seat of America’s power just lives in expectation of death, like a T-shirt shop that seems almost entirely built on printing memorials to murdered youth. It simply feels like this particular story loses a bit of its potential by telegraphing its punches. Available Feb. 26 via SLFSatHome.org. (NR)

Billie Eilish: The World’s A Little Blurry ***
What does it look like when an emotional teenager becomes a superstar, but at heart is still an emotional teenager? That question in no sense is meant to denigrate Billie Eilish or her talents; director R. J. Cutler’s documentary provides ample evidence that she has a unique gift for connecting with her fans via raw, deeply personal songs. But by virtue of capturing the period from 2018-2019—when Eilish was making the transition from niche internet phenomenon to world-famous, Grammy-winning pop icon—Cutler shows just how deeply weird it is when someone who’s still learning how to drive also has to deal with the perils of fame. The earliest footage is wonderfully intimate, showing Eilish and her brother/co-writer/producer Finneas working on the songs that will become her debut album in his bedroom, blissfully unaware of the madness to come. And it’s a terrific portrait of how important it is that Eilish’s family offers stability and support as the celebrity train begins barreling down the tracks. But the most poignant stuff might involve Eilish meeting Justin Bieber, whom she idolized as a pre-teen. It’s a connection involving someone who understands what it’s like to be in the spotlight as a teenager, and a young woman who, in that moment, is just a girl meeting her crush. Available Feb. 26 in theaters and via Apple TV+. (R)

My Darling Supermarket **1/2
“It’s just ordinary people doing their jobs,” says one subject of this Brazilian documentary set in a São Paolo supermarket early on; “Why would anyone want to watch that?” Director Tali Yankelevich thinks she has the answer, and she sort of does. Yes, the subjects are doing the simple work of keeping a grocery store running, from stocking the shelves to baking bread to cleaning the floors. But they’re also people, and there are some satisfying moments as the kind of service workers we pass every day reveal their inner lives—one checker’s story of an on-the-job panic attack, a bakery clerk digging into out-there philosophies, etc. That’s a worthy goal, but even at just 70-plus minutes, it feels like Yankelevich is pushing a concept that feels ideal for a short to feature length, and trying to wrestle a bunch of individuals' lives into something big about the search for meaning, even as she crafts some unexpectedly lovely images. It’s understandable that a filmmaker would latch on to a character like nerdy baker Ivan, and his obsession with manga heroes and cosplay, while it might actually be more ennobling to watch the simple skill involved in an artist hand-painting a sign for an upcoming sale. Available Feb. 26 via SLFSatHome.org. (NR)

My Zoe **
It’s hard to explain what’s so deeply frustrating about writer/director/star Julie Delpy’s domestic drama without venturing into the spoiler territory of what happens when it shifts to something besides domestic drama. Delpy plays Isabelle, a scientist recently separated from her husband James (Richard Armitage) and negotiating the difficult terrain of sharing custody of their 7-year-old daughter Zoe (Sophia Ally). The first hour focuses squarely on the conflict between Isabelle and James, which Delpy explores effectively in a mix of microagressions and flat-out macroaggressions, particularly when they’re both at their worst as Zoe faces a medical emergency. The film is on solid if familiar ground until (ATTENTION: Duck the hell out right now if you want to stay tabula rasa. Seriously. Right now.) Zoe dies, and Isabelle begins contemplating re-creating her with the help of a rogue cloning doctor in Moscow (Daniel Brühl). And everything that could have been compelling about that scenario—whether digging deep into maternal grief, or the tensions between Brühl’s doctor and his wife (Gemma Arterton), or what amounts to a science-fiction variation on Pet Sematary—falls completely flat. The ending is almost inexcusable, cutting away at the point when the real questions would just be beginning, making it hard to understand what exactly the point was. Available Feb. 26 in theaters. (R)

Night of the Kings ***1/2
The complex mix of history and mythology in writer/director Philippe Lacôte’s film might reveal itself to be even more profound with more than a single look. Initially, it feels like it’s going to be a gritty prison drama, as a new inmate (Bakory Koné) arrives at a remote facility in the jungle of the Ivory Coast called MACA that’s effectively run by the prisoners. As MACA’s boss Blackbeard (Steve Tientcheu) faces declining health, he tries to put off rivals for his position by beginning a ritual night of storytelling, designating the new arrival as “Roman.” What follows involves Roman in a Scheherezade-like challenge to tell tales for his very life, as he shares legends of an outlaw called Zama King on an improbable life journey through magical battles and contemporary Ivorian politics. The storytelling scenes themselves are fascinating, as the other inmates often jump in to improvise pantomimed action or serve as a kind of Greek chorus. And while the machinations for control of the prison take on an almost Shakespearean quality, Lacôte explores how much stories, tradition and ritual play a role in any society, even one this seemingly chaotic. Plus, you’ve got Denis Lavant walking around with a chicken on his shoulder, which automatically warrants a recommendation. Available Feb. 26 at Megaplex Valley Fair. (R)

Tom and Jerry **
Nostalgia casts a rosy glow around a lot of things, but it’s worthwhile to remember that, aside from the few years in the 1960s when the characters were overseen by Chuck Jones, Tom and Jerry cartoons were mostly a shabby substitute for the inspired anarchy of the Looney Tunes universe. This feature tries to fold the slapstick hunt-and-chase foundation of the cat and mouse duo into a live-action universe, where an unemployed young woman (Chloe Grace Moretz) joins the staff of a ritzy Manhattan hotel just as Tom and Jerry show up to make trouble. It’s a simple and obvious premise, with Michael Peña taking on the thankless role of Moretz’s fussy superior, and the prospect of an upscale society wedding to await pursuit-fueled destruction. The conceit just feels weird from the start—every animal in this universe, from spiders to elephants, are hand-drawn cartoons—and a lot of effort to put into something that’s only really interesting when it’s just the cartoons doing cartoon stuff, with no humans around. If you’re going to kids with slam-bang guffaws, don’t also try to sell me the idea that any of the human characters actually matter. Available Feb. 26 in theaters and via HBO Max. (PG)

The United States vs. Billie Holiday **1/2
Here’s a particularly odd bird that starts with the common perils of “tortured artist” biopics, adds a few uniquely over-the-top touches courtesy of director Lee Daniels, and still finds time to squeeze in some stuff that makes for a uniquely tragic character study. From a framing structure that opens with legendary jazz singer Billie Holiday (Andra Day) giving an interview about her life, the narrative flashes back to 1947, with Holiday becoming the target of a Federal narcotics agent (Garrett Hedlund) due to fear of Holiday’s anti-lynching anthem “Strange Fruit.” Much of the story revolves around Black undercover agent Jimmy Fletcher (Trevante Rhodes) working to help take down Holiday before becoming close to her, which ultimately gives it an arc very similar to Judas and the Black Messiah. The comparison doesn’t do this movie any favors, and tends to sideline Day’s terrific performance. There’s also overkill in Daniels’ montages, even as he understands how to turn Holiday’s singing of “Strange Fruit” into a straight-at-the-camera act of defiance. Also: If you’re going to cast Natasha Lyonne as Tallulah Bankhead, for heaven’s sake give us Natasha Lyonne as Tallulah Bankhead, not just a couple minutes of tease. Available Feb. 26 via Hulu. (R)