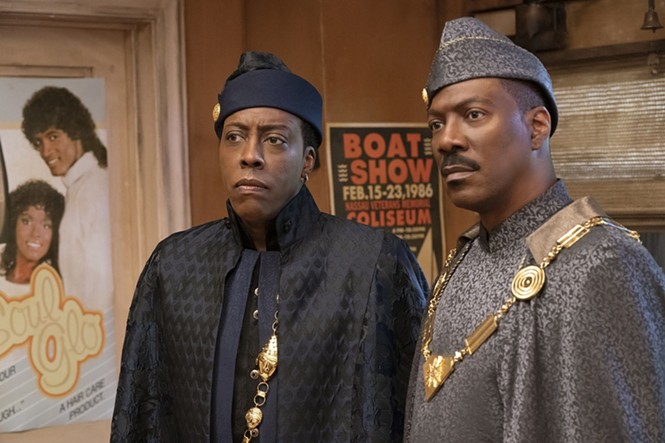 The Affair **
If you’re going to make a historical epic, you need to commit to making a historical epic, and not expect that the scope of what you’re trying to do can be captured in 100 minutes. This adaptation of Simon Mawer’s novel The Glass Room following two best friends—Liesel (Hanna Alström) and Hana (Carice van Houten)—in Czechoslovakia spanning 30-plus years from the run-up to World War II through the Prague Spring of 1968, often connected to the stunning home commissioned by Liesel’s wealthy husband (Claes Bang). The bulk of the plot deals with the fallout from their respective choices about fleeing or staying with their Jewish husbands, plus various melodramatic developments. But theoretically, the central dramatic arc involves the relationship between the two women, which seems repeatedly on the verge of turning into a romance before they are separated. The problem is that there’s not enough time spent in the first act establishing that relationship in the first place, and Liesel all but disappears for most of the second half. Van Houten’s performance anchors that second half through a somewhat familiar story of people “doing what we must” in wartime, but by the time The Affair swings back around to the question of whether Liesel and Hana can be happy together, it hasn’t built the foundation for making us care. Available March 5 in theaters and via VOD. (R)

Boogie **1/2
Writer/director Eddie Huang makes his goals excruciatingly clear—he has his high-school student characters arguing about the relevance of The Catcher in the Rye as a cross-cultural coming-of-age-story—and that lack of subtlety sometimes gets in the way of what’s most unique and interesting in his story. In contemporary New York City, high-school senior Alfred “Boogie” Chin (Taylor Takahashi) transfers to a new school that he and his father (Perry Yung) believe will advance his hoop dreams, while his mother (Pamelyn Chee) is forced to think more practically about the family’s future. The tension between Boogie’s parents provides a solid foundation for his coiled anger as a character, and there’s some great raw material in the relationship between Boogie and his new girlfriend (Taylour Paige), including a virginity-losing scene with a perfectly pitched awkwardness. But by the time we get to the showdown between Boogie and a rival basketball star (the late rapper Pop Smoke), every beat feels familiar, with too little snap in the performances. It’s a nice start to have an Asian-American coming-of-age story take a different shape—with a protagonist who’s far from stereotypical—while it’s still worth aiming for execution that matches innovation. Available March 5 in theaters. (R)

Chaos Walking **1/2
A nifty root concept gives director Doug Liman’s sci-fi adventure a chance to at some potent subtext, except that it never quite delivers a knockout punch either as simple genre fare or as allegory. In the year 2257, humans have colonized a planet where a strange phenomenon renders the thoughts of all men audible. Young Todd (Tom Holland) doesn’t realize, however, that the thoughts of women are not similarly affected, because there are no women in his town—until Viola (Daisy Ridley) appears as survivor of a crashed shuttle. Most of the narrative revolves around Todd and Viola on the run from the town’s controlling mayor (Mads Mikkelsen), and Holland lends his anxious charm to Todd’s inability to keep his mind hidden from the young woman with whom he’s instantly smitten. Chaos Walking feels on the verge of digging deep into ideas of toxic masculinity, attempting to tie it into  misogynistic religious zealotry. It simply feels like those notions dance around the periphery without taking full advantage of the potential in Mikkelsen’s villain. The rest is competent world-building and Liman’s reliably strong action pacing, serving a story that’s always watchable while leaving a lot of its potential unfulfilled. Available March 5 in theaters. (PG-13)

Coming 2 America ***
It’s usually the kiss of death when a sequel nudges you with a self-referential joke about sequels—in this case, specifically “sequels nobody asked for.” Yet there’s a satisfying mix of nostalgia-pandering and simple entertainment on display here, as Eddie Murphy returns to the role of Prince Akeem of Zamunda, and returns to Queens when he discovers that he fathered a son (Jermaine Fowler) 30 years ago. That trip is tangled up in a dispute with the neighboring kingdom of Nextdoria and its strongman leader (Wesley Snipes), and an archaic rule preventing Akeem’s daughter (KiKi Layne) from taking the throne, and which will certainly be part of some growing and learning. But Coming 2 America largely works because Murphy is both appealing in his own multiple-roles performance, and generous enough to allow castmates like Tracy Morgan and Leslie Jones to bring their own talents to bear. Sure, it’s a movie that features plenty of callbacks to the 1988 predecessor, and knows its audience well enough to lean into a soundtrack of vintage songs by Prince, Salt-N-Pepa and En Vogue. Maybe I’m an easy target for updating Prince Akeem stopping a New York cab in the original to stopping a ride-share driver who just can’t help unless you use the app. Available March 5 via Amazon Prime. (PG-13)

My Salinger Year ***
It might feel at the outset a little bit like a literary-world remake of The Devil Wears Prada, but writer/director Philippe Falardeau’s adaptation of Joanna Rakoff’s memoir finds its own distinctive tempo in telling the story of a would-be writer figuring out what she really wants. Margaret Qualley plays Joanna, who impulsively drops out of graduate school to move to New York, romanticized in her head as the place where a would-be writer should be. She lands a job as assistant to Margaret (Sigourney Weaver), a veteran literary agent whose clients happen to include the reclusive J.D. Salinger. Part of Joanna’s job includes reading Salinger’s fan mail, and Falardeau turns the staging of their impassioned missives into a fanciful representation of the way Joanna imagines a writer’s work touching readers. The relationship between Joanna and Margaret proves mostly incidental to the narrative, which allows for more of a focus on Joanna being more in conflict with herself than her employer. Qualley does a terrific job of embodying someone not quite fully formed yet, which heightens the power of a scene where Joanna’s resolution manifests itself in a blissful expression of how art transports us. Available March 5 in theaters and via VOD. (PG-13)

The SpongeBob Movie: Sponge on the Run **1/2
More than 20 years after the late Stephen Hillenburg’s denizens of Bikini Bottom first appeared, there’s still a little bit of gas in the tank, even if the some of the inspired silliness feels diminished since the creator’s passing. This third feature installment sends SpongeBob (Tom Kenny) and Patrick (Bill Fagerbakke) on a quest to rescue SpongeBob’s beloved pet snail Gary from the vain sea god Poseidon (Matt Berry). There’s some fun stuff along the way, including a mock-David Attenborough initial narration and the presence of Keanu Reeves as a wise spirit guide whose face appears in a tumbleweed. But while the story ticks off all the boxes with the familiar cast of characters—Plankton’s plotting to get the Krabby Patty formula, Squidward’s grumpiness, etc.—it just never quite pops with the energy of, say, David Hasselhoff becoming a human jet-ski in the original film. There’s nothing exactly wrong with anything that’s here; it simply feels like a way to pass the time, rather than the kind of nautical nonsense that makes you hope it can stick around for another 20 years. Available March 4 via Paramount+. (PG)

Stray ***
It’s not exactly subtle, the way Elizabeth Lo contrasts the way humans and animals, respectively, live and are treated on the streets of Istanbul—but that doesn’t mean it’s still not mostly effective. In its simplest terms, it follows one particular stray dog—called Zeytin by those who encounter her regularly—as she wanders through Istanbul, a city where roaming dogs are tagged but not captured or euthanized. Along the way, we also meet a group of homeless young Syrian refugees with whom Zeytin and other dogs often interact for food and mutual warmth. Not surprisingly, the refugees are often treated with less compassion than the dogs, even as the kids themselves find a sense of purpose in being caretakers to animals (though that might mean stealing a puppy). But harsh though it may seem, the humans are also less compelling subjects here than the animals, whether it’s fighting for scraps or navigating traffic in scenes that might make you cringe in anxiety for them. Lo sees to find her most distinct filmmaking voice not when she’s nudging us to note man’s inhumanity to man, but when she stays fixed during the closing credits on a dog listening to the call of the muezzin at dusk, and howling along in unison. Available March 5 via SLFSatHome.org and ParkCityFilm.org. (NR)