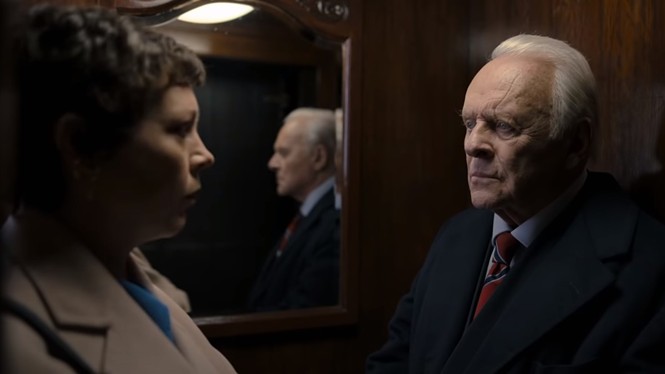 The Father ***1/2
There are plenty of melodramatic ways to tell a story about an older man reaching a moment where he can no longer care for himself; Florian Zeller, adapting his own play with Christopher Hampton, turns it into a harrowing sort of psychological thriller. Anthony Hopkins plays Anthony, an octogenarian Londoner living alone, with his daughter Anne (Olivia Colman) trying to attend to his care as he chases away a succession of caregivers. Or perhaps he’s already living with Anne and her husband (Rufus Sewell). Or perhaps the woman he’s living with isn’t actually Anne. Zeller repeatedly folds his narrative back in on itself and shifts the roles his actors are playing, conveying the tumult inside a mind that has begun to lose its sense of time and identity without (generally) turning the story into a puzzle box that needs to be solved. Hopkins and Colman are both superb, with Colman in some ways playing the trickier role, since “Anne” exists entirely through the disoriented way Anthony sees her. The climax stumbles a bit in overly literalizing the idea of elders becoming infantilized, but The Father mostly provides a bracing POV of how terrifying it must be to have every foundation you think you understand begin to slip away. Available March 12 in theaters. (PG-13)

Jumbo ***1/2
Writer/director Zoé Wittock’s debut feature could be read in a way that leaves a decidedly unpleasant taste in one’s mouth—but I prefer to see it from a different angle. It’s the story of Jeanne Tantois (Noémie Merlant), a young woman who starts a job working the after-hours clean-up shift at a small amusement park. And while we get plenty of hints that Jeanne is a little bit … different, that uniqueness takes a particularly curious turn when she becomes convinced that the park’s new tilt-a-whirl ride is communicating with her, and that she’s falling in love with it. The primary character dynamics involve Jeanne’s relationship with her single mother (Emmanuelle Bercot), and it plays out in some ways as an allegory for any kind of tension involving a parent’s disdain for a child’s relationship choices, or sexual orientation. Does that mean we’re getting an awkward conflation of queerness and mental illness, given the hints that Jeanne has long been a bit peculiar? Not necessarily. Merlant’s committed performance challenges all kinds of notions of “normalcy,” and the painful attempts to ignore one’s own truth that might only really be healed once the people in your life who are supposed to love you unconditionally actually do so. Available March 12 via SLFSatHome.org. (NR)

Long Weekend **
There are some movie concepts that, as much as you might want to grant them your suspension of disbelief, start to make you feel dumb for doing so. TV veteran Stephen Basilone (Community, The Goldbergs) makes his feature writer/director debut with this tale of Bart (Finn Wittrock), struggling in just about every aspect of his life—a writing career going nowhere, personal tragedies that sent him on a downward mental-health spiral—when he meets Vienna (Zoe Chao). She’s beautiful, she’s vivacious … and she has enough red flags like the lack of a cell phone and a wad of cash in her purse that makes Bart wonder what’s up. Vienna’s back-story takes the narrative in a different genre direction from the rom-com tropes that require Basilone to make blatant reference to “manic pixie dream girl,” and occasionally there are clever bits of dialogue or cute moments of chemistry between the leads. But Long Weekend starts to feel like it’s exploiting the idea of depression rather than really confronting it, dispensing with crucial moments of self-awareness too quickly. By the time we get to the final reveal, the whole thing feels like a manipulation where the payoff just isn’t worth the effort. Available March 12 in theaters. (R)

Quo Vadis, Aida? ***
An attempt to put an individual human face on the 1995 genocide in Srebrenica, Bosnia yields uneven but at times powerful results in writer/director Jasmila Žbanić’s historical drama. As Serbian troops begin their siege of the city, Bosnian U.N. translator Aida Selmanagić (Jasna Duričić) tries to find a way to save her own husband (Izudin Bajrović) and two sons (Boris Ler and Dino Bajrović) amidst the refugee chaos. Žbanić does a terrific job of conveying the scope of the crisis both inside and outside the U.N. facility, as well as making some fascinating counterintuitive directing choices, like a pre-war flashback that finds dancers at a nightclub not blissfully unaware, but staring into the camera with a sense of foreboding. She’s less effective, however, at making the central family distinctive people, as there’s too little time spent giving anyone besides Aida—captured by Duričić with an almost frantic tenacity—a real character to play. But the overall arc of the tragedy remains gripping, and one character does emerge vividly: the Dutch U.N. commander Karremans (Johan Heldenbergh), left unsupported as the Serbians commit atrocities at will, and gradually sinking into a paralyzed impotence hiding behind a locked door. Available March 12 via SLFSatHome.org. (NR)

Still Life in Lodz **1/2
By no means is it true that there are no new stories to tell about the Holocaust and its ripple effects over the decades; Slawomir Grünberg’s documentary just feels like it’s not sure which story it wants to tell. The focus here is not on those who directly survived the Holocaust, but on a subsequent generation—children of survivors, like Lilka Elbaum, Paul Celler and Roni Ben Ari—returning to Poland to explore the places their parents and grandparents were forced to flee. The title and set-up seem to suggest a particular significance to a still-life painting that once hung in the Lodz apartment where Lilka’s family lived after the war, and it does play a role in the way some surviving artifacts allow these people to connect to their family history. It just never feels like there’s a single emotional hook here, as we watch the subjects walk around Lodz and the surrounding areas, juxtaposed with archival footage of the Lodz ghetto. Are these people struggling with guilt over their relatively privileged lives? What does visiting these places offer them? There’s a nebulousness here that forces the weight of the historical tragedy to do almost all of the heavy lifting, while offering too little clarity on the stories of the individuals who should be at the center of the film. Available March 12 via SLFSatHome.org. (NR)

Yes Day ***
So many family films are lazy trash that it’s easy to feel like you’re grading on a curve when something comes along that’s simple, relatively charming and understands its basic storytelling beats. Jennifer Garner and Edgar Ramírez play Allison and Carlos, a married couple whose free-spirited youth has given way to being parents to three children (Jenna Ortega, Julian Lerner and Everly Carganilla) and feeling like they’re always saying “no.” So they indulge the kids in a “yes day”: 24 hours where the kids’ every (legal and non-dangerous) whim will be indulged. The whims here are generally of a light-hearted sort—power-eating a massive ice-cream sundae; playing a combo game of capture-the-flag and water balloon fight—that director Miguel Arteta gives a genial energy. As a narrative, it’s a solid kind of Very Important Lesson story, one where it’s not just about either the parents learning to lighten up, or the kids getting a comeuppance. The humor rarely rises above the level of smile-inducing, nor does it sink to grotesquerie. It’s simply a nice movie about a nice family learning to be nicer to one another. Nowadays, that’s worth something. Available March 12 via Netflix. (PG)