A four-hour epic that plays like a wake for a cinematic universe. 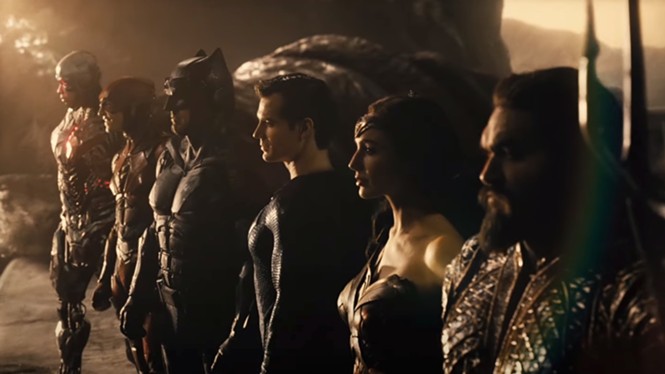 It’s a saga worthy, I suppose, of a four-hour epic: The movie that was taken from the hands of its creator, in the midst of his personal tragedy, and Frankenstein’d into something that was destined not to be satisfying to anybody. More than three years later, after fanboy rallying cries and a corporate realization that there was money to be made here, we get all 242 minutes of Zack Snyder’s Justice League, finally representing what the initial architect of the DC Cinematic Universe saw as its culmination—or, I guess, as much of a culmination as an ongoing franchise enterprise could be allowed to be.

What we get for the investment of that time is the removal of a bunch of stuff shot by Joss Whedon—including the notorious digital erasure of Henry Cavill’s mustache that made it look like he was smuggling Silly Putty in his philtrum—plus deleted scenes and at least one all-new sequence to fill out the Snyder-directed stuff we already saw in 2017. It’s still an apocalyptic scenario in the now-seemingly-obligatory tradition of big superhero dustups, with a megalomaniacal villain (Ciarán Hinds’ Steppenwolf) trying to gather several powerful objects into one super-ultra-powerful object, with thousands of CGI minions just waiting to be dispatched by our heroes. And there’s a shift in the emphasis on a world mourning the death of Superman (Cavill) in Batman v Superman: Dawn of Justice.

One significant advantage of this version is that Snyder is able to rectify a fundamental structural flaw that wasn’t true in, say, Marvel’s The Avengers: The need to effectively introduce brand-new characters to audiences for the first-time, requiring major back-story time that a typical theatrical release just wasn’t going to have time for. There’s more of Barry Allen/The Flash (Ezra Miller), including an introduction to Iris West (Kiersey Clemons); there’s more Victor Stone/Cyborg (Ray Fisher) and his angst over being turned into a metallic monster by his STAR Labs scientist father (Joe Morton); and there’s a touch more of Arthur Curry/Aquaman (Jason Momoa), though we subsequently got a whole-ass Aquaman movie to fill in those blanks.

There’s also the restoration of an entire other layer of the villain’s back-story with a bigger-bad called Darkseid pulling the strings of our ostensible big bad—and it’s here where things get a little weird. It’s clear that Justice League was planned as the jumping-off point for more MCU-like adventures and subsequent “phases,” whether they involved the next attempts by Darkseid to rule the universe, or Lex Luthor (Jesse Eisenberg) recruiting Deathstroke (Joe Manganiello) to help hunt down Batman, or Martian Manhunter (Harry Lennix) visiting Bruce Wayne. The only problem was that the 2017 release of Justice League proved to be a disappointment, Ben Affleck bowed out as Batman, a Flash feature got stuck in a revolving door of creative teams, and all of those plans went kablooey. Watching Zack Snyder’s Justice League in 2021 can’t help but be a reminder that maybe, maybe, if we had gotten Zack Snyder’s Justice League in 2017, all of these teases wouldn’t now look like dead ends.

Of course, there is one other issue with Zack Snyder’s Justice League, which is that it’s definitely Zack Snyder’s Justice League, and your mileage may vary as to whether that’s a good thing. His style is most definitely his own, but that can prove irritating if you’re not on board with his grimdark tone or his deep, profound commitment to so many slow-mo action shots that it starts to feel like this would be a three-hour movie simply if everything were shot in real time. In this form, Justice League is certainly better than it was three years ago, but it doesn’t feel better enough to make it seem like this movie would have saved Snyder’s DC Cinematic Universe. Even as much of the plot involves the resurrection of Superman, this feels kind of like a wake for a bunch of other movies that also never were.