Movie Reviews: New Releases for May 27-28 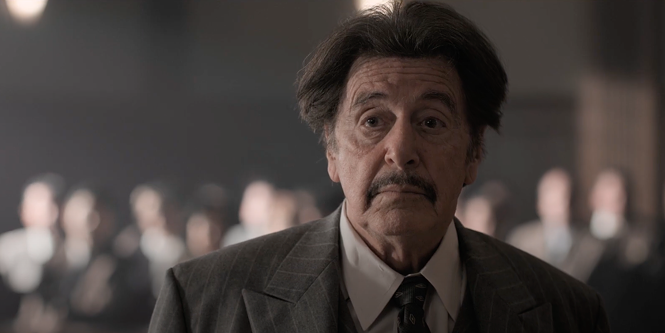 American Traitor: The Trial of Axis Sally **1/2
This truly weird historical drama/biopic shouldn’t work at all, yet somehow delivers just enough slivers of interest not to be a complete mess. It’s the story of Mildred Gillars (Meadow Williams), and American singer/actress who becomes a voice for Nazi radio propaganda while living in Berlin circa 1941, then winds up on trial for treason after the end of World War II. The film flips back and forth between time periods, addressing both Gillars’ broadcasts under the control of Joseph Goebbels (Thomas Kretschmann) and the 1949 trial where she was defended by James Laughlin (Al Pacino)—and it’s unfortunate that the link between them is Williams, whose performance could charitably be described as “leaden.” Through a dozen different narrative threads—from the infatuation with Gillars by Laughlin’s second-chair attorney (Swen Temmel), to Laughlin’s own possible shift of conscience, to the love affair that Gillars says saved her life—American Traitor keeps bouncing in search of a real focus. Yet there’s still something magnetic about Pacino when he really digs into a monologue, or even his open disdain for Gillars. And it’s fascinating watching the re-creations of Axis Sally’s broadcasts, trying to convince Americans to abandon the war effort. It’s not much of a movie, but it’s a great snippet of history with space for a great actor to do his thing. Available May 28 in theaters and via VOD. (R)

Blue Miracle **1/2
A good underdog sports movie transcends genre clichés only to the extent that its characters feel fully fleshed-out—and co-writer/director Julio Quintana comes up just a touch short in this fact-based story. Set in 2014 Cabo San Lucas, Mexico, it’s the tale of an orphanage facing huge debts, and its operator, Omar (Jimmy Gonzales), is running out of time and ideas. A local big-money fishing competition offers a possibility, but only if Omar and his boys team up with surly has-been captain Wade Malloy (Dennis Quaid). The tension between a reluctant Wade and his new crew provides both the drama and the comic relief, and both the lead actors and the young supporting players make it entertaining enough on the way to the conclusion that’s obvious as the only reason the movie was made. But while there’s some back-story involving Wade and his estranged family, the bulk of the narrative weight falls on Omar, with a gradually-unfolding history of personal tragedy and getting involved with organized crime. The problem is that this family-friendly presentation has to tiptoe around all the darker edges, leaving something that could easily be a Disney+ original when perhaps a little bit more darkness might have served the movie better. Available May 27 via Netflix. (NR)

New French Shorts ***1/2
The seven shorts featured in this omnibus package provide some great material, and all the better because they offer such an expansive picture of what might be considered a “French film.” Two of the shorts—Sukar and the lo-fi sci-fi So What If the Goats Die?—are actually set in Morocco, while others center a Black woman (Adrien Mérigeau’s Genius Loci) and an immigrant (Ariane Labed’s Olla). There’s great material throughout, notably the two animated features, Genius Loci and Agnès Patron’s And Then the Bear, both of which create stunning hand-drawn worlds in which the protagonist’s anxieties manifest in surreal visions, like a swirl of windblown papers in Genius Loci that becomes a prowling dog. The highlight, however, is Merryl Roche’s Haute Cuisine, in which a young woman making the transition from her father’s family restaurant to an upscale restaurant kitchen finds that she literally has to put her blood into her work to get noticed. It’s an effective brand of body horror that feels particularly attuned to the idea that a woman has to sacrifice more to get noticed in a man’s world—and as filmmaking, it’s the kind of thing that makes you really want to see what Roche does next. Available May 28 via ParkCityFilm.org. (NR)

Port Authority ***
Writer/director Danielle Lessovitz crafts an affecting character study out of a story that could easily have come off as an exploitative 21st-century spin on The Crying Game. Dunkirk’s Fionn Whitehead plays Paul, a troubled 20-year-old from Pittsburgh who arrives in New York hoping to live with his half-sister, but instead ends up at a men’s shelter, connecting with a bunch of homophobic guys who spend their days working for landlords evicting tenants. Soon Paul meets Wye (Leyna Bloom) and her friends in Harlem’s kiki ballroom scene, and falls hard for her—before discovering that she’s trans. Many of the plot developments feel predictable, from Paul trying to keep his two new friend groups separated, to the inevitability that the eviction process will come for Wye and her housemates. Yet Lessovitz treats Wye and her House McQueen “brothers” with respect, emphasizing the sense of connection that Paul never had from the home life he reveals. The connection between Paul and Wye is never fetishized, even as Paul has to question his sense of his own masculinity, and Whitehead’s coiled performance captures the evolution of a young man whose search for unconditional love takes him somewhere he never expected to go. Available May 28 via SLFSatHome.org. (NR)