New music from BC Roadz 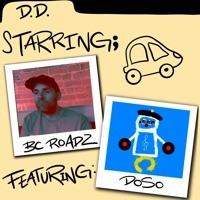 BC Roadz Releases “D.D.”
Another new release from local rapper BC Roadz is here, and it’s more of the same super wacky stuff that was present on his EP A.D. which he released last year. “D.D.” is a single out today, Jan. 21, and it comes ahead of another EP whose date is yet to be determined. On the new single, BC tempers a rather troubling tale of himself/his story subject going off the rails, passing through tolls on the road and picking up a sex worker out of boredom just to spend time rapping to her instead, after remembering he’s broke. As BC details a story that ultimately ends violently, it’s all tempered by slow and woozily moving beats, and the opening and closing narration, provided by “Doso,” a robotic voice who repeats sleepily, “I have lost my mind,” while presumably being cheered on by BC. It’s a weird track, but one that stays fun thanks to Doso, who seems to be an alter ego of sorts for the artist. BC Roadz only got into making music about eight months ago, and after getting into production and bedroom recordings, he says that those experiences “gave me the momentum to take my art seriously, even if the subject matter is not.” That, plus the fact that his 13-year-old daughter designs his release covers, adds to the charm of this local artist. Stream it on Spotify and keep up with BC Roadz on Instagram at @bcroadz.