After Yang, The Princess, Watcher, Riotsville USA and more

By Scott Renshaw and Victor Morton 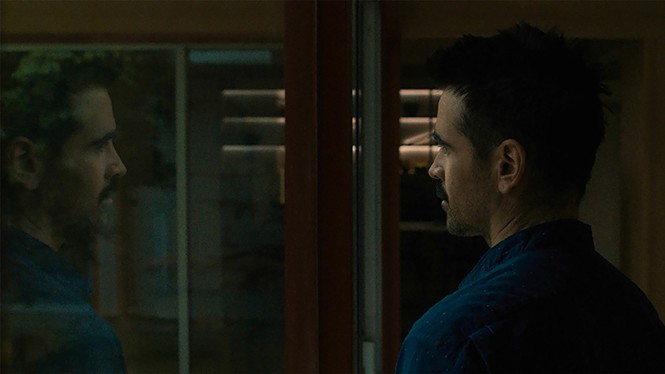 After Yang ***1/2
Kogonada’s 2017 debut feature Columbus was a masterful example of finding profound emotion in quiet, restrained filmmaking; his follow-up, adapting a short story by Alexander Weinstein, manages to be nearly as rich and resonant. In an unspecified near future, married couple Jake (Colin Farrell) and Kyra (Jodie Turner-Smith) have employed a “technosapien” android big brother named Yang (Justin H. Min) as a companion and cultural teacher for their adopted Chinese daughter, Mika (Malea Emma Tjandrawidjaja). When Yang abruptly stops functioning, Jake’s attempts to get him repaired ultimately reveal an inner life he was never aware of. Kogonada manages to mix in a little formal playfulness with his simpler master-shot compositions, including a banger of an opening credits sequence and hiccupping editing that evokes the way our own memories replay in our heads. The depth of the story, however, comes from the way Yang doesn’t simply serve one metaphorical function. This is a tale of how parents introduce the concept of death to their children, of discovering how easy it is not to really know the members of your own family if you don’t care enough to pay attention, of the way we can turn technology into the thing that raises our kids, and all of that swirled into a familiar science-fiction motif of what truly defines humanity. It’s patient, lovely and warm—or, to put it more simply, it’s Kogonada. (SR)

When You Finish Saving the World **1/2
Writer/director Jesse Eisenberg attempts a compassionate skewering of a very particular kind of narcissistic intellectual progressive, but instead mostly provides a reminder of how Barton Fink snuck up on the same basic idea. The central characters are a mother and son in Bloomington, Indiana: Evelyn (Julianne Moore), earnest director of a shelter for women escaping domestic violence; and Ziggy (Finn Wolfhard), a teenager with an online following for his folky music and a crush on a socially-conscious classmate (Alisha Boe). Eisenberg isn’t afraid to make his main characters self-absorbed to the point of seeming irredeemable, which isn’t inherently problematic; “likeable” isn’t the same as “interesting,” and it’s hard to argue that these people aren’t interesting in their distinctive brands of misguidedness. Yet while the script only occasionally dips into the broadest satire of savior-complex wypipo, it ends up racing far too quickly towards the idea that Evelyn and Ziggy have suddenly learned how to actually listen to what other people want, unlike the Coen brothers masterpiece that gave the same character flaws real consequences. A few perfectly-pitched sequences—including Evelyn abruptly exiting a situation where she’s no longer in control of the conversation—don’t add up to enough of a fully-fleshed character study about folks who keep wanting to show off that they can show you the life of the mind. (SR)

Watcher **
Can you make a movie about nothing happening? Some avant-garde and super-obscure art-house directors almost have, but in narrative cinema, no—which in some way sinks Watcher. It’s about Julia (Maika Monroe), a wife following her husband to his job in Romania, where he speaks the language and she doesn’t. Walking around during the day in Bucharest, she becomes convinced she’s being stalked by a man across the street, and there is a serial killer on the loose. But there’s a perfectly innocent explanation for everything, male authorities and her husband say. And in some ways, Julia clearly is a stalker/watcher herself. Some of these sequences are tense (though the score is audience-goosing thriller cliche), but Watcher’s thin script has nothing else to be about. All the while, you know how it’ll end, because (1) a film generally can’t be about nothing that ever pays off (Watcher may remind you of a Hitchcock title I won’t name); and (2) a film about a woman fearing male violence only to learn it’s all in her paranoid head probably could not be made today. So you spend the whole movie watching her fears being debunked, but still waiting for the vindicating turn in the last five minutes. Just don’t look for an explanation for some of the initial debunkings. (VJM)

892 ***
Maybe the Sundance movie equivalent of “comfort food” is a drama where the narrative bones are sturdy, the central performances are engrossing and the sociopolitical subject is all just right there in the text. Director Abi Damaris Corbin—who co-wrote the script with Kwame Kwei-Armah—tells the fact-based story of Brian Brown Easley (John Boyega), a Marine Iraq veteran with mental-health issues who holds up a bank in Marietta, Ga., entirely to get attention for the fact that his VA disability check was garnished (the title refers to the amount of the withheld funds). There’s little set-up or flashback within the story structure, which focuses almost entirely on Easley with his two bank-employee hostages (Nicole Beharie and Selenis Leyva) and the police activity outside, including hostage negotiator Eli Bernard (Michael K. Williams, in his final screen performance). 892 is clearly at its best when Easley and Bernard are in communication, with the unstable Easley finding enough moments of lucidity to understand when the negotiator’s tactics—however sincere in their attempts to avoid bloodshed—are partly manipulation. And it’s simply a pleasure to be in the presence of such exceptional acting, also including Beharie as the bank manager, whose version of Stockholm syndrome is about not wanting her son to see another Black man killed by police. A detour involving Easley’s phone conversation with a local news producer (Connie Britton) adds little to the story, and there’s nothing groundbreaking here in the portrayal of veterans failed by the system (though Corbin employs one terrific shot of a VA office packed with people waiting to be heard). It all just works—and sometimes, “works” is enough. (SR)

The Princess ***
It’s understandable if the gut reaction to the subject of Ed Perkins’ documentary is “really, another Princess Diana movie?” But the reason it strikes out unique territory is that it isn’t really about Princess Diana, as much as it’s about the insatiable public appetite for her that was inextricably connected to her life (and death). Working entirely from contemporaneous material—television interviews, news footage, even personal home video—Perkins recounts 17 years of obsession with the former Diana Spencer, from the shy teenager accosted on the street for inside dish on her possible impending engagement, through the “fairy tale” wedding and the tabloid headlines recounting every ebb and flow of the contentious marriage. It’s inevitable that a lot of the ironic punch comes from our knowledge of what comes after: a talking-head confident that “all this telephoto lens business will stop” once Diana and Charles are married; the footage of Charles and Camilla Parker-Bowles together. Yet with all this collected material, it’s hard not to be gobsmacked by the extent to which Diana-watching became a cottage-industry, requiring everybody to have an opinion about who was in the right, and whether she actually craved attention, and so on. Mostly, it’s a swipe at the idea that this nebulous idea that “the press” was to blame, as one fellow angrily exclaims after her death—a shot immediately followed by people buying every possible publication with Diana’s face on it. In an era before “clickbait,” everyone was complicit who couldn’t stop clicking on her story. (SR)

We Met in Virtual Reality ***
As a proud member of the plain-old reality-based community, I am skeptical of VR, and feared We Met in Virtual Reality would pander to the self-indulgent. There’s some of that, and some of these avatars are clearly spacey and unthinking. But that’s the human condition itself, and the film—narrated by its avatars in the scenes they created—shows why people need and use fantasy, like the movies themselves. These fantasies at least create a community important in bad times like family deaths; my mother died in November, and I’ve never met in the flesh the majority of the people who sent condolences on Twitter and Facebook. And sometimes tie-ins to what the film always acknowledges as “real life” do happen, including a VR wedding, though one wonders how such unions are consummated, which the film (I think knowingly) teases in the last shot of that day. This film only lacks one thing, but it’s a big lack. One of my favorite documentaries from 2014 Sundance was Love Child, about parents whose 3-month-old starved to death because they spent all their time in online role-playing games. There’s not even a hint in this film that virtual reality—which is, after all game-playing turned into living (or “living”)—could ever have this kind of problem. It makes this film feel like the technology equivalent of the corporate rah-rah film, on your first day on the job. A great film would … at least acknowledge this downside. (VJM)

The Exiles **1/2
There are at least three different documentaries strewn throughout—one of which is great, one of which is pretty good, and the third of which doesn’t work at all. Directors Violent Columbus and Ben Klein begin with a profile of NYU film professor and Oscar-nominated documentarian Christine Choy (Who Killed Vincent Chin?), who began the process of following several of the leaders of the 1989 student protests in China shortly after they were forced to flee the country; nearly 30 years later, she seeks some of them out to show them her original footage. While the filmmakers are focused on Choy herself—a chain-smoking, profanity-spewing firecracker—The Exiles is an absolute delight of unfiltered personality. Then we get to the stuff where Choy is digging into her footage and traveling around to show it to the people she’d filmed in 1989, and it’s hard to express how deeply uninteresting it is to watch people watch footage of themselves, or how shapeless all of that original raw footage is. Things get a bit more interesting as The Exiles probes the notion of how those protest leaders like Wu’er Kaixi and Wan Runnan feel about their failed efforts at creating change, and especially their bitterness as the 30th anniversary of the Tiananmen Square Massacre approaches, and they consider the lack of support by U.S. administrations. Columbus and Klein had a choice as to what their documentary would be about, and by not actually making one, they made the wrong one. (SR) 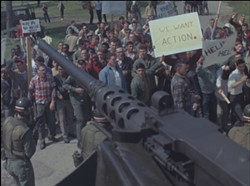 Riotsville, USA *1/2
The title comes from the U.S. military building “riotsvilles” on bases in the mid- and late-1960s, to train their men to put down insurrections, and to invite observers from civilian law enforcement. This formally daring film opens with slightly “off” images of a town we learn is a façade, like a movie set, and the first human … is a sniper. The scenes of training overflow with suggestive irony, including when Black soldiers who play demonstrators being arrested get into their roles more than strictly required. The score is suggestive and creepy, and director and researcher Sierra Pettengill plays with stocks and resolution in the old footage that constitutes the film. But … the content. When Riotsville USA leaves the riotsvilles and becomes about the late-’60s racial unrest, it decays into tendentious polemic. The unnecessary and didactic voiceover telling us what to think would be bad enough, but too much of the film is just sloppy, cherry-picked free association. If you think it insightful that NBC’s coverage of the 1968 Republican Convention had Gulf Oil as on-screen program sponsor and/or that Gulf was running ads for an insecticide, a product clearly linked to riot control, then have at this film. I wondered who sponsored the ABC and CBS coverage that Pettengill chose not to use, and were their products crushing ’60s protesters? Were Daley’s cops eating Rice-A-Roni, the San Francisco Treat? (VJM)