The Son; When You Finish Saving the World; Alice, Darling 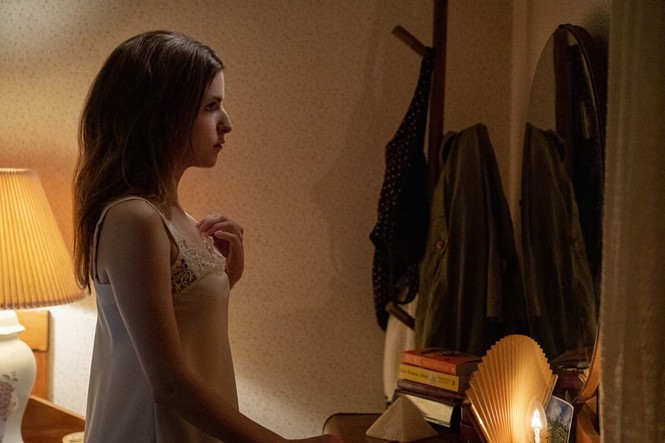 Alice, Darling **
There are movies that  err in feeding you a story with a complete lack of restraint, and sometimes there are movies—like this one—that feel so determined to be subtle and elusive that they miss an opportunity to give the story depth. Anna Kendrick plays Alice, a young woman who goes away for a weekend getaway with her two longtime best friends, Sophie (Wunmi Mosaku) and Tess (Kaniehtiio Horn), for Tess’s 30th birthday. But in order to do so, Alice has to lie about her whereabouts to her boyfriend Simon (Charlie Carrick), part of an indication that their relationship might not be entirely healthy. To the credit of director Mary Nighy and Alanna Francis, they’re not remotely interested in turning their story into a Sleeping With the Enemy-style thriller about a psycho significant other; there’s a lot of rich territory to be explored in emotional manipulation as a form of abuse. Unfortunately, the snippets we see of Alice’s interactions with Simon don’t do much to offer insight into Alice as a character, and what it is about her personality and history that might feed into her belief in Simon’s denigrations, no matter how much of her hair she literally tears out. A subplot involving the search for a missing teenager near the women’s lake house tries to do a lot of thematic heavy lifting regarding the dangers faced by women, but Alice herself remains an enigma, a blank slate of victimhood. Available Jan. 20 at AMC Theatres. (R)

The Son *
It’s one thing if a movie makes you feel uncomfortable; it’s another thing if it feels almost sadistically designed to make you wait with dread for an almost inevitable outcome, and without much of a lesson to be learned in the process. As he did with his 2020 Anthony Hopkins Oscar-winner The Father, director Florian Zeller adapts his own play (assisted by veteran Christopher Hampton), this one about divorced-and-remarried attorney Peter Miller (Hugh Jackman) and his ex-wife (Laura Dern) struggling to deal with their 17-year-old son Nicholas’s (Zen McGrath) depression and suicidal ideation. Peter’s issues are wrapped up in his unresolved conflicts with his own father (Hopkins) and a newborn son with his new wife (Vanessa Kirby), all of which at least provides the potential for a complex exploration of parental guilt when faced with a child with mental illness. But Zeller builds a narrative through-line that simply feels designed to make you cringe while waiting to see what horrible thing Nicholas might do: Will he harm himself? His infant half-brother? His stepmother? It doesn’t help that McGrath’s performance is overwrought without conveying genuine torment, or that Zeller’s direction—which smoothly made a cinematic transition in The Father—relies here on heavy-handed foreshadowing symbolism. Unlike the thorny “where did I go wrong” character study of something like We Need to Talk About Kevin, this movie revolves around shocking and disturbing you, almost as ends in themselves. Available Jan. 20 in theaters. (R)

When You Finish Saving the World **1/2
Writer/director Jesse Eisenberg attempts a compassionate skewering of a very particular kind of narcissistic intellectual progressive, but instead mostly provides a reminder of how Barton Fink snuck up on the same basic idea. The central characters are a mother and son in Bloomington, Indiana: Evelyn (Julianne Moore), earnest director of a shelter for women escaping domestic violence; and Ziggy (Finn Wolfhard), a teenager with an online following for his folky music and a crush on a socially-conscious classmate (Alisha Boe). Eisenberg isn’t afraid to make his main characters self-absorbed to the point of seeming irredeemable, which isn’t inherently problematic; “likeable” isn’t the same as “interesting,” and it’s hard to argue that these people aren’t interesting in their distinctive brands of misguidedness. Yet while the script only occasionally dips into the broadest satire of savior-complex wypipo, it ends up racing far too quickly towards the idea that Evelyn and Ziggy have suddenly learned how to actually listen to what other people want, unlike the Coen brothers masterpiece that gave the same character flaws real consequences. A few perfectly-pitched sequences—including Evelyn abruptly exiting a situation where she’s no longer in control of the conversation—don’t add up to enough of a fully-fleshed-out character study about folks who keep wanting to show off that they can show you the life of the mind. Available Jan. 20 in theaters. (R)