'At Least You're Pretty'

From the Utah Royals to the World Cup in France, 'fansplaining' is an utterly unsurprising phenomenon that needs to end at women's sporting events. 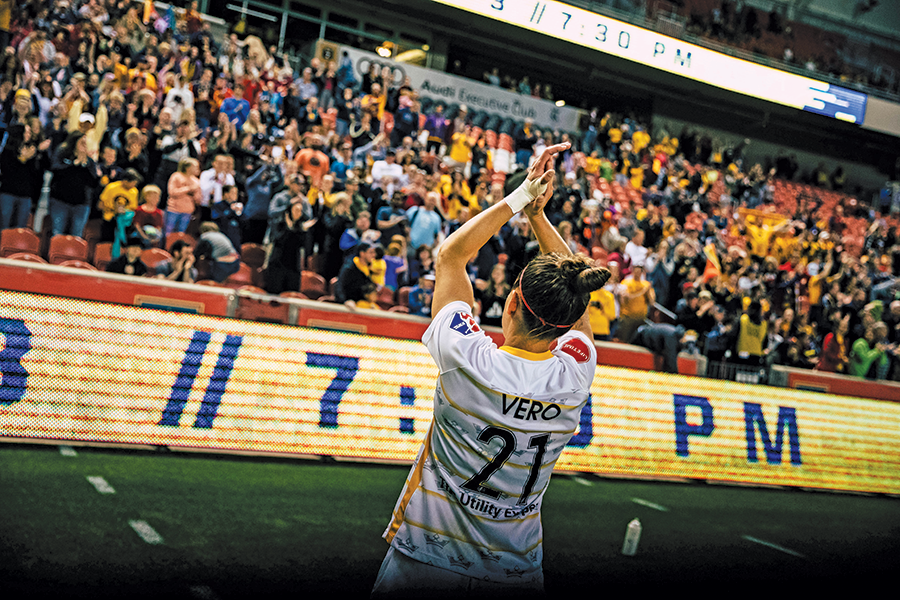 The young man sitting behind me was apoplectic.

"Stop passing the ball backwards!" he screamed, again and again, from his seat in the seventh row at Sandy's Rio Tinto Stadium, where two of the most talented teams in the National Women's Soccer League were on the pitch.

Between his howls of protest, he breathlessly complained to an older gentleman who seemed to be either his father or uncle. "It's really not that difficult," he whined. "They need to score on their opponents' goal, but they keep moving the ball back toward their own goal. It's ridiculous."

What's ridiculous, of course, is the notion that a backpass—used to relieve pressure, extend possession, exhaust opponents and stretch defenses—is contrary to good soccer. What's ridiculous is that a man who looked to be in his early 20s, confident enough in his soccer knowledge that he would scream at professional athletes, wouldn't know this. Seven-year-old footballers can understand and execute this fundamental tactical concept. Nobody who actually watches or plays this sport misunderstands this.

There's a fan like this at every professional sports contest in America. You can't pack tens of thousands of people into a stadium or arena and not have some know-it-all try to tell the pros how things should be done.

At women's professional soccer games, though, there isn't one of these guys in every crowd—it seems there's one in every row. And as the Utah Royals and other National Women's Soccer League teams enjoy increased attention and attendance in the wake of the 2019 Women's World Cup—including from legions of men who have awaken to the glory of the game as it is played in the best league in the world—it's time for men to confront fellow men about our very bad habit of mansplaining to female athletes. Or, if you will, "fansplaining."

"Typically the men will come up to me after games and tell me how I could have done better, and honestly, they always find a way to touch me while they're telling me." —USU basketball player Taylor Franson tweet this

I'll give the git from the seventh row a little credit: He shut up rather quickly when I asked him whether he actually knew anything about soccer or if he just enjoyed looking like a fool. But no sooner had he trapped up than a guy on my same row, seven or eight chairs to my left, filled the void.

"Send her!" he screamed every time a player from the home team touched the ball, as though hitting a weighted pass ahead of a sprinting forward was a) the only play in soccer; b) something every player can and should do, at any moment of the game and from any spot on the pitch; and c) an idea that had not crossed the minds of any of the players on the field when the moment was actually opportune.

My 12-year-old daughter looked at me, rolled her eyes and shook her head. "Every game," she said. "Every. Single. Game."

We'd recently returned from the Women's World Cup in France where, if anything, things were worse. Soccer's international governing body, FIFA, had comendably committed to putting all-women officiating crews on the pitch, but not-so-commendably decided to use this tournament to test out a few rule changes and new officiating tactics. One was a delayed offside call, in which assistant referees wait until the culmination of an attacking sequence to signal that a player was offside at some point during the immediately past run of play. This puts close calls in the hands of the video-review officials, and ostensibly prevents sequences that might otherwise result in a goal from being stopped by a mistake.

Related Are You Ready for Some Fútbol?: Utah’s newest pro sports team strives to set a standard for women’s professional soccer.

Are You Ready for Some Fútbol?
Utah’s newest pro sports team strives to set a standard for women’s professional soccer.
The smell of fresh paint and warning beeps from construction vehicles fill the air as several women around the corner lie on their backs stretching.
By Ray Howze
Cover Story

We attended matches involving 13 different nations, and heard men—and yes, it was always men, even though there were obviously plenty of women in the various crowds—screaming in nearly that many languages about the delayed calls. They weren't complaining that this new officiating approach was bad; that, at least, would be debatable. Rather, they were screaming at the female referees that they should be signalling the offside earlier, clearly unaware that the officials were doing exactly what they'd been instructed to do. Instead of taking a clue from the fact that every assistant referee was making this call in the exact same way, these men all assumed the female officials were all getting it wrong in the exact same way.

I've brought up the fansplaining phenomenon to several male friends. In one way or another, they've all told me I'm making too much of it. "You've got a daughter and so you're more sensitive," one said. "At sporting events, people yell about what's happening on the field. If they think a player is doing something wrong, they're going to say something, and they're going to say it really loud."

"But do you think male fans think female athletes are doing something wrong more often?"

But Sarah Kaplan, the director of the Institute for Gender and the Economy at the University of Toronto, suspects there's more to it than that. Sure, she agreed, "fans are often yelling at players and coaches, no matter what the gender." But where it takes shape as mansplaining, she told City Weekly, "is if there is a special sense among male fans that they know better than women athletes in assuming that women can't be experts in their own sport simply because they are women."

And yes, that's hard to quantify, but it's not hard to see and hear, especially at the 20,000-spectator capacity Rio Tinto Stadium, where the Royals share playing space with a men's team, Real Salt Lake. My family has sat behind the north goal at Real games since the stadium opened in 2008. In that time, I've heard plenty of grumbling when long-time goalkeeper Nick Rimando has an off game, but I've never—absolutely never—heard someone scream instructions at him. For Royals keepers Nicole Barnhart and Abby Smith, though, it's "get back on your line" and "cover the cross" and "close the near post."

It's not just soccer. And it's not just professional women athletes who are subjected to fansplaining.

At Utah State University, a middling Division 1 sports school where I have taught since 2011, there's certainly no shortage of armchair coaches who think they know what actual coaches and players should be doing in every sport. The difference is that they seem to feel very comfortable letting female players and coaches hear about it.

USU basketball player Taylor Franson told me she couldn't remember a specific incident where a spectator screamed instructions at her from the stands. That could be owing to the fact that college basketball arenas tend to be louder than college soccer fields. Whatever the case, Franson hastened, men never seem shy about walking up to her after the final whistle to offer their unsolicited opinions.

"Typically the men will come up to me after games and tell me how I could have done better," she said, "and honestly, they always find a way to touch me while they're telling me."

"It was especially noticeable my senior year when I switched positions from center back to outside back and had all the fans right next to me," she recalled. "I always did the throw-ins and free kicks, and constantly had men, including friends, telling me what I should do—who to pass to, who was open."

And, predictably, that wasn't the worst of it.

"During away games," she said, "men cheering for the other team would often make gross comments about my body."

This reflects of the behavior of some men's fans at NWSL games, and at the World Cup, too, where the vile, sexist, degrading words that were flung from the stands—again always by men—will be part of the tapestry of memories of the trip that my daughter will carry with her for the rest of her life.

"You suck but it's OK," one American fan screamed at a Swedish midfielder. "At least you're pretty."

I didn't confront most of those men, just as I haven't confronted most of the mansplainers in the crowds at Utah Royals games.

That's a failure I'm trying to figure out how to rectify. Fansplaining is a problem created by men. The misogynistic taunting that comes from the stands is almost entirely from men. Men need to be responsible for ending this behavior.

How do we do that without inciting in the sort of testosterone-laden aggression that makes things worse? I'm still trying to figure that out.

For now, though, there's this much to say:

Men, you don't know more about the game than the women you're watching. You just don't. It doesn't matter if you played in high school or college; they played in high school and college, too. It doesn't matter if you started watching the game when everyone else was watching Sesame Street; they did, too. And now they get paid to play the game. And you get paid to do whatever it is you do. And if you're sitting in a stadium, watching a game, what you get paid to do isn't sports.

Cheer. Jeer. But don't tell women athletes how to play their game. It's ridiculous.


The author is an associate professor of journalism at Utah State University, a long-time soccer coach, and the father of a kid who can bend it like Lucy Bronze.