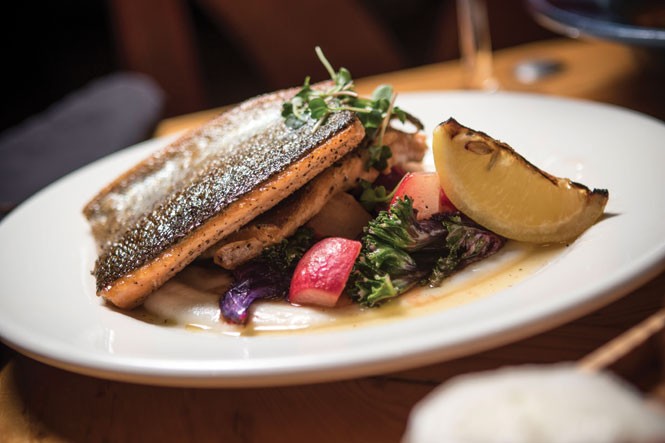 One is tempted to compare the cozy, friendly eatery that is Avenues Bistro on Third with a type found in places like Boulder, Colo.; Portland, Ore.; Ann Arbor, Mich.; and Santa Fe, N.M. You know the type: mismatched plates and utensils, lots of artisan ingredients, funky and eclectic decor, a sunny patio or porch, wholesome and creative cuisine—that sort of thing.

And all of these apply to Avenues Bistro on Third. I'm inclined, however, not to compare it to restaurants in those groovy towns, because increasingly, Salt Lake City and its surrounding restaurants are styling a groove of their own. It's time we stood up, loud and proud, and took ownership of our own ever-improving dining scene. It's no longer nascent.

So, I won't say that Avenues Bistro on Third reminds me of a neighborhood restaurant in Portland or Boulder. But it does. And much of the credit for growing such a neighborly space goes to owner Kathie Chadbourne.

I first met Chadbourne when she opened Avenues Bakery, which eventually closed and became Wild Grape New West Bistro (also recently closed). I miss them both. Chadbourne was also involved in the early days of 9th South Delicatessen, another place I like a lot.

But Avenues Bistro on Third, to me at least, is the clearest expression of Chadbourne's vibrant spirit: It's funky, quirky, a little nutty (I say that with love), nurturing, neighborly, denim-clad and a family affair. Her daughter and pastry chef, Kelly Sue, runs Back Alley Pastries in the rear of the restaurant, while a second daughter, Aimee, manages the front of the house and serves customers with a professional friendliness that would be hard to duplicate. The entire staff is treated like family—as are Avenues Bistro customers.

It's rare that you don't see diners at Avenues Bistro table-hopping and mingling. There hasn't been a time I've eaten there when I didn't run into someone I know. The close quarters facilitate friendly conversation and on-the-spot food reviews. After commenting to Aimee recently that the fettuccine with homemade beef Bolognese, whipped ricotta and Parmesan seemed to be flying out of the kitchen, a woman seated at the counter across from us turned around and said, "It's incredible! You have to try it." And I will, next time.

But first, I recommend sharing a starter or two (or enjoying just one, if eating alone). By the way, Avenues Bistro is a great place to dine solo. There are plenty of seats at the counter overlooking the kitchen, whereas the ones along the opposite wall lend themselves to a more monastic meal experience. An appetizer like the Manila clams ($14) is hefty enough to serve as an entree if you're dining by yourself. It was a dozen-and-a-half clams in peppery broth made with sautéed garlic and shallots with white wine. Alongside were four slices of grilled toast, and we used every last slice to clean up the delicious broth remaining in the bowl. The clams were moist and tender, and there wasn't an unopened or broken one in the bunch—a superb starter.

There's a chalkboard on a wall near the entrance area listing local and artisan purveyors that Chadbourne favors, and it isn't just a list of cheesemakers, charcuterie producers, farmers, breweries and such. She also lists businesses that support Avenues Bistro on Third, such as Byrd's Fire Protection, the Mahoney Group, Zion's Bank, Scott Plumbing—even the Utah State Tax Commission. It's not tongue-in-cheek; these are all neighbors who have, in one way or another, contributed to the success of Chadbourne's bistro. I wouldn't be surprised if, somewhere in the restaurant, there isn't a list of every person who signed the petition and helped make possible the reopening of Avenues Bistro's outdoor patio—which, as I'm sure you know, was closed down for more than a year thanks to a few complaining neighbors. Chadbourne and her allies fought the good fight and, I'm happy to report, the patio is open and thriving again.

If you're bored with the dry, cardboard-textured garden burger on most menus, sink your teeth into the Bistro's lentil-rice burger ($14). It's a vegan "burger" made with rice and lentils, garnished with herb tomato compote, fresh arugula and pickled red onions, and served on a house-baked bun with salad or steak fries.

My wife and I both loved the excellent griddled trout entree ($18). It's a generous serving of two trout fillets with a swizzle of butternut-squash purée, radish chunks, warm ginger-spinach-arugula-fennel salad, sprinkled with sunflower seeds. The trout was wonderful with glasses of Copain "Tous Ensemble" Chardonnay, and you'll appreciate that Avenues Bistro offers most of their wines as 3- or 5-ounce pours, or as a 750 milliliter bottle. It's a small but appealing wine list featuring terrific "artisan" producers like Soter, Bucklin, Carol Shelton and Selby. There's also a provocative cocktail list (Persephone's Cider, for example) and a range of liquors, beer and spirits.

My favorite Avenues Bistro dish was outstanding—the spicy chicken tortilla ($20)—and yet, it could have been even better. The name is somewhat of a misnomer, since the tortilla serves only as a crust. But, oh my, what a crust! It's an airline chicken portion, encrusted and fried with crisp tortilla morsels and served with a fiery, rich, scrumptious black-bean, rice and corn soup. But, the dish would be even better if the crispy chicken weren't sitting in the soup, which makes it soggy. I'd prefer the soup on the side.

Once the home of a small pharmacy in the Avenues, Kathie Chadbourne's Avenues Bistro on Third soothes and comforts far beyond the ability of the most powerful pharmaceuticals.