Battle of the Garlic Burgers

There's a reason Utah is home to zero vampires. 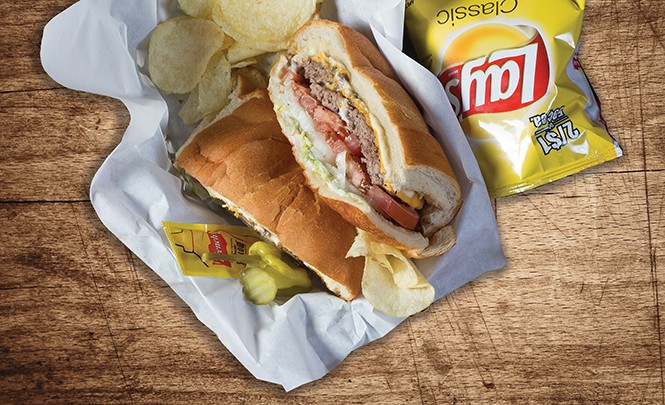 Google hard enough, and you'll come to the conclusion that garlic burgers made their pungent splash onto Utah's culinary scene in the 1970s. Around that time, Helen Chlepas opened the Cotton Bottom Inn and remembered an on-the-go Greek treat consisting ofhot buttered garlic bread. The move proved to be a stroke of genius and a legend was born. Almost half a century later, the humble and punchy garlic burger is as synonymous with the Beehive State as fry sauce, green Jell-O and bad driving.

But, how do you spot a good one? For starters, it should be filled with character, have a bite where you'd least expect it and be completely unapologetic for its lack of decorum. Perhaps this is why it has become a hallmark at some of the Salt Lake Valley's finest dives. Our smackdown sample population on this first go—SLC's Busy Bee Bar & Grill and the aforementioned jewel of Holladay—both advertise their garlic burgers as the "best in town," but whose offering is truly deserving of the title? Despite the looming threat of pointed comments and hate mail (not to mention severe garlic breath), it was a question I decided to answer.

The OG Cotton Bottom (6200 Holladay Blvd., 801-273-9830, cottonbottominn.com) has the reputation advantage—most "best burger" lists I've come across have at least given the place an honorable mention—so that's where I decided to start. Right off the bat, it's tough to beat the bar's location. It's nestled in a cluster of trees, sharing the same outdoorsy ambiance and cool mountain air as its more upscale homies Franck's and Tuscany, plus my first visit just happened to take place on the definition of a beautiful evening. The wife and I split a burger, since they're gigantic (also, it was our first one of the evening). At $8, the move represented a perfectly viable (and way cheap) dinner for two.

Surprisingly, this iteration eschews the traditional roundness that one would expect from a burger. It's served on a square, toasted bun, which is sliced in half to give it the feeling of eating a hero sandwich. The smell is spectacular—a grilled burger dripping with roasted garlic and butter goes perfectly with a summer night. The patties are juicy and flavorful, and I'm a bit of a sucker for burgers topped with a ton of finely shredded lettuce and onion. I was worried the mighty garlic would overpower the supporting characters, but it was subtle enough to share the spotlight. My initial thought at first bite: This one is gonna be tough to beat.

In contrast to the Wasatch foothills, our second stop, Busy Bee Bar & Grill (2115 S. State, 801-466-0950) calls metro SLC home. It's got more of a bar vibe than the inn, and their menu is a bit broader in selection as well, including their signature French dip & Swiss and a solid gyro ($8.25 each). Though there are a few burgers that I'd love to go back for (I got your number, "El Diablo"), I was here for a garlic one, so I begrudgingly stuck to the plan. Visually, it shares some traits with its Cotton Bottom counterpart: It's about the same size, and it's served on two thick pieces of garlicky Texas toast (also making it square). Committing to the bit, subbing a bun for garlic bread was a nice touch—it's crispy, buttery and elevates the overall garlic flavor.

Decisions, decisions. I admit that going into this, I thought Cotton Bottom would be a shoo-in, but Busy Bee isn't messing around, either. The verdict? After much deliberation, and a shot or two of Mylanta, Cotton Bottom takes the prize. Garlic burgers are about the only thing they serve here, so they've had years to get the formula right. That's not to say Busy Bee didn't put up one hell of a fight. For a truly Utah experience, ditch the corporate drive-thru and check out either of these fine establishments. Just make sure bring a few breath mints along.