Come for the birria and stay for the mole tamales at West Valley's La Casa Del Tamal. 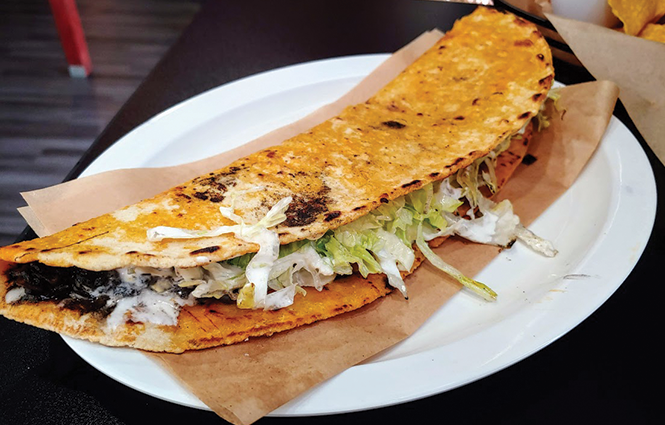 I've always had a deep adoration for our local brand of Tex-Mex places hiding out in the strip malls along the Wasatch Front. I'm a total a sucker for gooey enchilada combos served upon bafflingly hot plates, five-dollar margarita specials and complimentary baskets of chips and salsa. While La Casa Del Tamal (2843 S. 5600 West, Ste. 140, 385-266-8729, lacasadeltamalutah.com) shares some foundational DNA with these neighborhood favorites, its modernized interior space and unique take on a wide array of traditional Latino cuisine reveals a restaurant that breaks free from the mold of its predecessors.

La Casa Del Tamal first popped up on my radar while drooling through social media pics of cheesy, dippable birria tacos. Though the thought of snagging a plate of these trendy tacos was the impetus of my visit, I soon found that the menu has much more to offer. When I arrived, I became distracted from my quest by the list of tamales—after all, the restaurant's name implies some kickass entries in this medium. They go for $1.99 apiece and come in flavors like the robust rajas con queso, stuffed with a creamy poblano pepper and cheese mixture; the rojos de puerco packed with shredded pork and a chile puree; and the mole poblano, which is dripping with rich, warmly spiced mole.

I feel like tamales are often an underutilized part of the Mexican food arsenal—the humble tamale contains so much flavor and textural potential. La Casa Del Tamal realizes this potential, and each representative of its tamale roster is a superstar in and of itself. A good baseline to start with is the rojos de puerco, as it brings a nice chile flavor that complements the tender roast pork. The tamale masa is perfect—just the right hint of steamed corn sweetness to provide the undertone for the savory tag team within.

For diners after something with a spicy and sophisticated flavor profile, I'd suggest the mole poblano. I'm sure mole tamales are more common than I am used to, but this combo was new to me at the time of my visit. That said, I couldn't contain my excitement—I could only imagine the wonders that a good tamale and mole mix would create in my mouth. When it arrived, lovingly wrapped in a steaming hot corn husk and stained chocolatey-brown from the mole that was to come, the aromas were tantalizing. Eating mole is always a bit of a risky endeavor, as its flavors and composition vary so starkly from place to place, but this had all the right moves for me—rich, autumnal flavors that evoked raisins and cinnamon, paired with a smoky heat that embraces your whole body like a warm hug.

This unexpected, but very welcome, diversion from my primary objective of birria tacos had me a little flustered—it's not often that you go on a blind date only to run off with the Uber driver en route. All the same, my birria taco plate ($11.95) looked appealing enough to recapture my attention. The combination of melty cheese and slow-stewed birria turns the warm yellow corn tortillas into a lovely orange hue indicative of the greasy goodness inside. A plate of birria tacos also comes with a cup of the glorious consommé created by the stewed birria, and dipping one of these cheesy tacos into that savory broth makes you question any affection you ever had for a French dip sandwich. The consommé softens the taco and its ingredients just enough to create an amazing texture between crunchy and chewy.

After starting with a few safe bets that were immensely impressive, I made an executive order to try huitlacoche for the first time within the walls of La Casa Del Tamal. Sometimes called corn fungus or, in much more awesome parlance, corn smut, huitlacoche is a gray fungus that grows on ears of corn. It can be a gnarly concept, until you realize that edible fungus is edible fungus, and nine times out of 10, it's excellent. Such is the case with the huitlacoche quesadilla ($10.95).

Quesadillas at La Casa are essentially tacos in stretch limo format—they're made on the same corn tortillas that have been extended to include extra food girth. This one comes overflowing with shredded lettuce and queso fresco, and the huitlacoche has been simmered to gravy-like perfection, creating a filling that shares a texture with black beans. The result is the hearty, stewed flavor of mushrooms with a bit of sweetness from the corn kernels. Mushrooms have always been a solid stand-in for proteins, and with the huitlacoche's long legacy as a Central American delicacy, I'm surprised more plant-based joints don't use it for their own meatless recipes. After downing this quesadilla, I can proudly say that I am pro-corn smut.

My experience at La Casa Del Tamal was defined by the unexpected. I went in with my gaze fixed on a plate of tasty birria tacos, but I was so pleasantly surprised by the other items I ordered that I can't wait to go back.