A garage owner triumphs against Sandy City over their claim to a slice of his property, but might still lose the fight.

On a late August morning, Robbie Maupin sits on a broken-backed chair in his cinder block, oil-stained garage on the corner of a street that sweeps down to the western entrance of the Real Salt Lake soccer stadium. In his trademark look of cargo shorts, sandals and no shirt, the man who recently defeated Mayor Tom Dolan's Sandy City in court, nevertheless displays a somber, even anguished, demeanor.

His garage is a mix of a one-man business, social club for family and friends, and a place of succor for some on the lower rungs of society who know he will try to help them in desperate times. When the vehicle they rely on for work and family breaks down and they can't afford the repairs, it's Garage 94 on 9400 South that they turn to for aid.

Like so many of the small, automotive-related businesses that surround Real's stadium, Maupin has struggled through the years to come to terms with his dominant, public and privately financed neighbor. But in his case, that struggle has been ramped up by a lawsuit he filed against Sandy City in 2014 to claw back the southeastern corner of his 0.29-acre lot from the municipality, which claimed that it had purchased the 0.04 acre from the prior owner.

In late July 2016, 3rd District Court Judge Su S. Chon ruled that the disputed parcel, alongside which runs a canal, belongs to Maupin. You can read the full ruling here.

Maupin took out a second mortgage on his home to pursue legal action against his own town. He and his wife have three children to feed, a fourth having recently been added after they started caring for a friend's teenage daughter. Garages can be feast-or-famine work, he says, and he's a one-man shop. Along with his credit card debts and often finding the cupboards bare of food, he now faces legal fees of $100,000 spent to prove something he already knew. Namely, that he owned a sliver of land his city coveted to the point of acting in a manner Maupin's attorney Derek Coulter calls "highly unethical."

Maupin, Coulter and the mechanic's friend, mentor and real estate broker Joe Scovel say Sandy acted in bad faith, meaning Coulter says, that you know you don't have a sound legal basis for your decisions and actions. But in Chon's decision, while she found that Sandy didn't own the land it had paid almost $15,000 for to prior owner Tamie Ogden, she also found the city did not act in bad faith. "As the defendants in this case, we are pleased with the court's finding that Sandy City did not act in bad faith when purchasing the disputed property and, as a result, did not see fit to award the plaintiff either attorney's fees or punitive damages," texted Sandy's communications director Nicole Martin after City Weekly requested an interview on the decision. 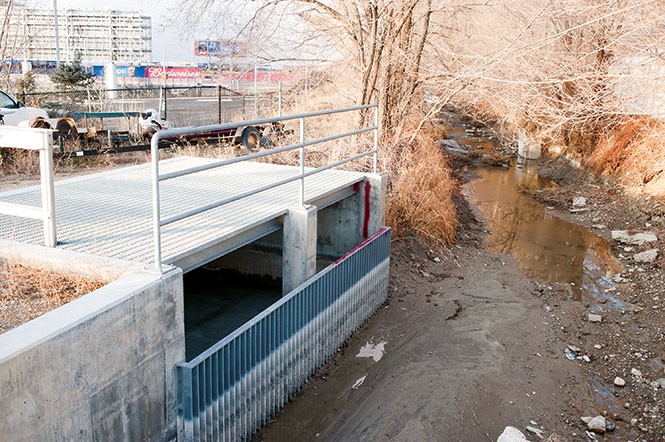 Rather than bad faith, Chon wrote in her ruling that Sandy City "simply relied on the information that it had at that time to make a choice, and the choice, unfortunately, was incorrect."

Where Maupin and his team express frustration is that Chon nevertheless also found that Sandy's purchase of the disputed land was not in "good faith," either. She continued in her conclusion that "to qualify as a purchase made in good faith, 'the purchaser must ... take the property without notice of any infirmity in his grantor's title.'" The infirmity in this case was Maupin's documented claim to the land, something Chon noted in her decision Sandy had been aware of since 2007.

In a February 2015 cover story called "Garage Grit," City Weekly told the story of Maupin's battles to keep control of his garage and its land from former owner Ogden and Sandy. But his victory in court has left him with legal fees he cannot pay. "I'm just really trying to keep my head above water," he says. Maupin's situation highlights how residents and small businesses who find themselves in the crosshairs of their own municipality and have to sue to defend themselves, can end up teetering on bankruptcy even as they celebrate victory. "A government bureaucracy can ruin people, and under Utah law, unless the court finds they act in bad faith, you have no recourse to seek legal fees," attorney Coulter says.

In her 17-page decision, Chon lays out how Maupin bought the garage in 2007, the same year Sandy decided it wanted to buy property in the area the garage is located, "to develop a walking path to move people to and from the soccer stadium," she wrote. Realtor Scovel says that after Sandy City purchased the land on which Real built its stadium, the canal that runs along the edge of the garage's southeastern boundary raised several concerns for the city. Not only did they want to build a walkway to the stadium, he says, but they also needed flood control boxes to protect the stadium from the canal. In 2012, Salt Lake County installed a water-diversion box on Maupin's land.

Five years after Maupin took full control of the garage, independent real estate broker Dan Simon approached former owner Ogden over the piece of land that runs down to the canal. The city believed that a paragraph inserted by the title company in the warranty deed could be interpreted as reserving it for her. Several employees of Integrated Title Services testified that the paragraph was to protect their own company if there were issues with the canal company over access to the land.

According to Martin, Ogden told Simon "she owned the property in question and was willing to sell it to the city." Chon found, however, that Ogden's testimony in court was not "fully credible that she intended to reserve rights to the disputed parcel." Ogden declined to comment for this story.

After Sandy bought the canal bank, it fashioned a quit-claim deed transferring ownership to the city, effectively subdividing Maupin's property. "The disputed parcel was not properly subdivided," Chon wrote.

And this is where one element of the bad faith comes in, Maupin and his team argue. Property subdivision, according to Utah law, requires that neighbors, in this case Maupin, be notified prior to the subdivision. During court testimony, Coulter says, the city's surveyor Nolan Hathcock and independent broker Simon, who has handled many land purchases for the municipality, both told the court they were instructed by Sandy not to talk to Maupin about the city's plans for his land.

It also emerged in court, Coulter continues, that Sandy uses title companies to complete property deals, but not in Maupin's case. "It doesn't take a rocket scientist to figure out what they were doing was something highly irregular." He adds, "All of this could have been avoided if the city had spent one hour consulting with a title company."

In questions emailed to Martin, City Weekly asked Sandy why it banned its representatives from approaching Maupin, but in a responding statement, that question was not addressed.

Martin says that Sandy feels vindicated that "we've proven the city's interest was solely to purchase available trail property for the convenience and safety of our residents and was not an attempt to unlawfully seize private property."

When Scovel told Maupin he had won, "my first thought was, 'That's good, [but] what about who's paying for it?' I just don't feel I have to pay for something they did to me and cause me to prove what I already knew."

Coulter says his office is still working on the lawsuit. "The fact that Sandy City did not get punished in any way for this unethical act would lead me to believe they will continue to do the same thing." He says the losers in this case are the garage and Sandy's citizens. He estimates that Sandy spent the same as Maupin did on legal fees. If so, along with paying approximately $100,000 defending itself through outside counsel and $15,000 buying land from someone who did not own it, there were also internal costs from in-house attorneys, Coulter notes.

Sandy is satisfied. "Judge Chon rendered a decision which she believes was just and equitable and the city accepts her decision," Martin wrote in an email.

As a tax paying business, Maupin texted, "that does what it can to help the community," he feels that Sandy's treatment of him is far from fair. Facing a municipality with deep pockets and no inclination to apologize, a hard-fought court victory seems all the more diminished. "I couldn't enjoy that victory because I'm still thinking about the money I owe," he says. "If I've got to sell my shop to pay for it, then that's not really winning."