Get your creative quench on with Salt Lake's Space Tea. 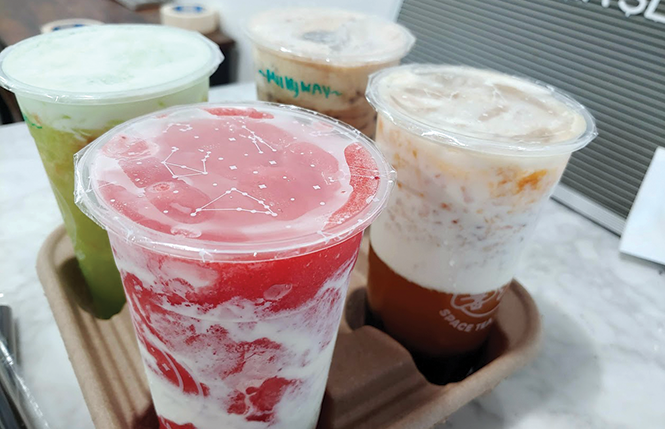 The summer months are rapidly approaching, and if you haven't outlined a solid liquid-refreshment plan, complete with a supplemental chilled dessert addendum, it's time to get cracking. I came up with mine back in January, and it's quite comprehensive. Though I'm not sure I can get into the deep minutiae of said refreshment plan, I think it's safe to reveal the crux of the whole thing. Based on my preliminary visits, the cosmic bubble tea blends and monolithic taiyaki waffles at Space Tea (1085 S. State Street, 385-528-0141, spaceteaslc.com) will make it a sort of beverage hub for me come summer.

I first encountered Space Tea via my Instagram feed—their charming space otter logo and lineup of colorful caffeinated brews provided a nice pop of brightness to my timeline, so I took note. Any time I see boba drinks that have accoutrements like aloe jelly, pureed peaches and soft serve, I tend to reconsider my existing biases against this trendy drink. It's locally-owned and operated by the Ly family, and I had a chance to speak with Don Ly about this new addition to Salt Lake after snagging some boba tea during a recent visit.

While managing Space Tea, Ly is also studying at the University of Utah to be an elementary educator. Between his studies and managing a café in the middle of a pandemic, Ly's got quite a bit on his plate. "Opening during a pandemic has been challenging," Ly says. "We're still on a strict no dine-in policy, which can impact the customer experience."

Luckily, Space Tea's signature drinks and desserts are easy for the grab-and-go diner craving cool drinks bedazzled with a multitude of slippery textures. "I think bubble tea is starting to become more popular," Ly says. "I wanted to branch out and offer a more unique experience for bubble tea in Salt Lake." That unique experience is on display with Space Tea's later hours, rotating mix of seasonal drinks and astronomy-inspired concepts.

My first foray into the menu's multicolored madness was the Milky Way ($5.85), which takes a traditional milk tea, loads it up with black sugar boba, cream and bits of crushed Oreo cookies. It sounds a bit bonkers on paper, but once you jab that industrial-sized straw through the seal on top of this sugary delight and commence slurping, it'll all make sense. The Milky Way captures the nostalgic flavor combination of Oreos and milk while spiking the whole experience with notes of smoky black tea, adding a dash of sophistication to the palate. For something a bit less extreme but just as energizing, the Otter Space ($5.85) packs the same caffeinated punch and milk tea goodness with some soft serve and black sugar boba.

My favorite fruit-filled drinks at Space Tea tend to be on the green side—must be a holdover from all that lime Kool Aid that got me through pre-adolescence. The Martian ($5.85), made from honeydew lemonade, aloe jelly, crystal boba and an assorted fruit cocktail, gets my vote for the ultimate summer refresher. I've developed a fondness for aloe beverages after burning my mouth one too many times on spicy Thai or Korean dishes, so adding that soothing element to a cool blend of honeydew lemonade—more sweet than tart—and throwing in some crushed fruit helps extinguish both external and internal conflagrations.

The surprise of my visit was the Pluto's Peach ($5.85), a peach-infused green tea blend served with honey boba. Space Tea's peachy green tea balances its flavor combo nicely, and the crushed peaches-and-cream midsection is a nice textural interlude.

It's a safe bet that you'll find something tasty with which to wet your whistle at Space Tea, but the real safety net for getting through Utah's smoldering summer temperatures will be the taiyaki ($6.45), a Japanese dessert that is almost too beautiful to eat. It starts with a waffle baked in the shape of a fish, filled with red bean, Nutella or biscoff and topped with soft serve. Space Tea always has vanilla on tap, but their second flavor tends to change with the seasonal menu. Taiyaki is one of the most grandiose yet approachable desserts you'll lay eyes on, and I look forward to enjoying many of these as I sweat out another summer on the Wasatch Front.

On top of fashioning a creative and colorful menu of beverages, Space Tea has been active in various local fundraisers. Most recently, they donated a portion of their proceeds to OCA Utah and Red Canary Song in solidarity with the Asian-American community that has faced so much adversity as of late. "I really wanted Space Tea to be a community-based business, and we have been more than happy to help out," Ly says.

While Utah's persistent winter chill continues to haunt our spring mornings, that arid summer heat will be here before you know it. May the cosmology of Space Tea lead you and your taste buds through the heat unscathed.