Fry sauce so tangy, you'll want to bathe in it. Onion rings so crispy, they'll make you consider swearing off french fries for good. Locally made barbecue that forces even a persnickety Texan to sing its praises. They all sound like tall tales, but they're not.

When it came to assembling a sampler plate of some of the best representatives of Salt Lake City's culinary landscape, City Weekly contributors jumped at the opportunity. The question was: Where to start? Influenced by its healthy immigrant influx and informed by tradition and comfort, SLC's food scene is continuously expanding—and ever delectable.

In this guide, you'll find everything from a roundup of restaurants that have opened and flourished over the past year to a spotlight on an outside the brick-and-mortar mobile food park and catering options sure to transform your next office meeting from drab to fab. Added to the mix are vegan eateries that force you to leave your bland expectations at the door and desserts that are spicing up last courses throughout the land.

Far from mythical, each entrée, snack and drink featured in our pages is quite real and made with love right here on the Wasatch Front. Hopefully, our descriptions and first-hand sighting (and tasting) accounts are enough to inspire you to go on a delicious expedition to find them. 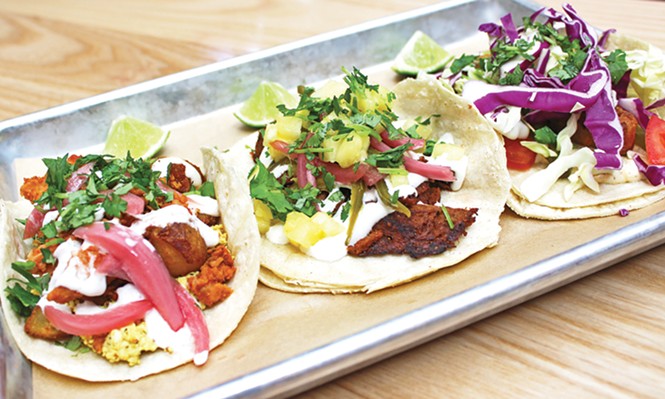 Rookies of the Year
Many great restaurants have popped up in the past 365-ish days—here are some standouts.

During my time as City Weekly's food dude, I'm quickly learning that the local food scene has set the bar pretty high for newcomers. Utah diners have come to expect newbies to be well-oiled machines by the time they first open their doors. Given the fact that new restaurants tend to need some time to develop their sea legs, I've been impressed with the number of eateries that, despite being only open for around a year, have hit the ground running. Here are a few new kids on the block who are poised to start dominating Utah's food sphere.

Boltcutter
As a guy who grew up on burritos that were little more than meat-and-cheese delivery systems, it was quite a shock to my system when I found some plant-based Mexican food that presses all the right buttons. The team at Boltcutter has developed meatless versions of classic burrito and taco fillings like carne asada, barbacoa and fried fish. Where some plant-based eateries feel an obligation to make their meatless "meat" taste like the original, Boltcutter lets the natural flavor of jackfruit, tempeh and seitan meld with their house blend of seasonings to create something new, yet bracingly familiar. For a maiden voyage, consider trying the delectable tacos al pastor ($8), the sin carne burrito ($8) and the nachos ($10). 57 E. Gallivan Ave., bit.ly/2GLpiQy

Laziz Kitchen
With its solid menu of Middle Eastern cuisine and preternatural intuition regarding the way food can knit a community together, Laziz Kitchen has established itself as a warm and welcoming spot since its opening day. Its location within the Central Ninth neighborhood that contains a slew of other local and community-focused businesses only serves to cement its presence as one of the city's most hospitable restaurants. The ever-changing stew menu, which comes in both vegan and non-vegan varieties, is always a good bet, as are the fried cauliflower florets ($8) and life-affirming shakshouka ($14). 912 S. Jefferson St., 801-441-1228, lazizkitchen.com

MakanMakan
At first glance, it might be easy to dismiss MakanMakan as yet another Asian-inspired joint in a market that already has a lot of Asian-inspired joints. While MakanMakan's foundation is indeed steeped in regional noodle soup and curry, it pulls menu items from all over the Eastern continent. Diners can sample cuisine from Indonesia and Malaysia, which are two criminally underrepresented cultures in the vast universe of Asian cuisine. Start the meal off with an order of roti canai ($4.75), a tasty pan-fried flatbread, and some martabak telor ($6.95), which is essentially a crisp crêpe stuffed with meat and scrambled eggs. I hesitate to offer any guidance with the entrée section since it's so fun to explore, but for those in need of a tiny push in the right direction, both the spicy laksa noodle soup ($10.55) and the meaty, goat-filled curry gulai kambing ($11.25) are great places to start. 33 E. 11400 South, Sandy, 801-251-0967, makanmakansandy.com

Pizza Nono
When American wood-fired pizza joints became less gimmicky and started to take the art of rustic pizza making more seriously, pizza lovers all over the country heaved a well-earned sigh of relief. Pizza Nono has doubled down by creating a space where passionate pizza fans can gather for authentic, wood-fired pies without buttoning up the atmosphere too much. The interior evokes a casual-but-hip setting, and the giant communal table dominating the space makes diners remember why pizza was invented in the first place—to unite all walks of life in warm, cheesy harmony. For simple perfection, go for the margherita ($10); for a bit of spice, gravitate toward the sausage pepper ($13). 925 E. 900 South, 385-444-3530, pizzanono-slc.com

Pretty Bird
Never have I Instagram-stalked a restaurant's progress as much as I did Pretty Bird's. The hype behind this place alone was pure social media fodder: Extremely talented—dare I say, celebrity—chef Viet Pham leaves the sommeliers and white tablecloths of his fine-dining past behind to open a Nashville-inspired hot-chicken joint. I had the opportunity to visit on Day 1, and the place was up and running as if it had been in its Regent Street digs for years. Nary a condiment was misplaced, and the fried chicken was just shy of revelatory. Their sparse menu offers fried chicken quarters and sandwiches, which can be ordered in four degrees of spicy, but the fried chicken sandwich ($10.50) with the acidic bite of pickles and slaw is my current obsession. 146 S. Regent St., facebook.com/prettybirdchicken

Seasons Plant Based Bistro
French and Italian cuisine earned their reputation by truly exploring the depths of how butter, cream and dairy can enhance the flavors of pretty much everything they touch. What makes Seasons so spectacular is that it captures all of this rich decadence without using a modicum of dairy. I have yet to figure out exactly how these warlocks have managed such a feat, but when food tastes this good, it doesn't really matter. This is a place that, according to the world of classic culinary technique, should not be able to exist. Yet, it does—and does so very well. The crudité board ($13) is an excellent starter to either the gnocchi alla vodka ($15) or the short-rib ($16), both of which are meditative studies in umami goodness. 1370 S. State, 385-267-1922, seasonsslc.com