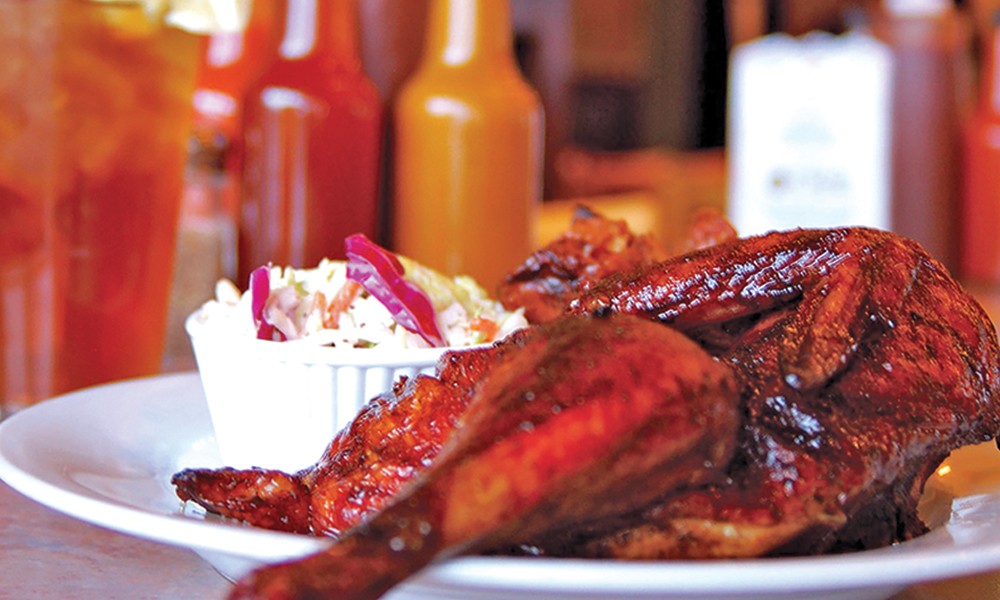 Texan-Approved Barbecue, Perfection in a Bowl and Crack Nachos
A trio of local bakers reveal their favorite comfort foods—and where you can go try 'em.

Those of us who savor the doughy delights provided by professional bakers seldom take the time to think about all the hard work that goes into producing some of SLC's finest pastries, cakes and other baked goods. Notwithstanding the sheer physical strength required to beat dough into submission; the mental discipline that it takes to resist simply eating everything that comes out of the oven is equally worthy of respect.

While creamy éclairs, buttery cookies and thick wedges of chocolate cake come to mind when many of us think of the term "comfort food," bakers who are around sugary treats all day tend to pursue more savory options. With that in mind, I met with some of Salt Lake's finest bakers and pastry chefs to discuss their go-to lunch and dinner spots.

Elisa Barber of The Baking Hive
One thing we tend to forget about professional bakers is that many of them have also trained as culinary chefs. Such is the case with Elisa Barber of The Baking Hive. Before opening her Holladay bake shop, she studied at the Ballymaloe Cookery School in the Irish village of Shanagarry. "I trained in pastry and savory cooking," she says. "I knew my passion was with pastry and baking, but you don't know until you try something else."

In an effort to truly discover her culinary destiny, Barber moved to London where she split her time between working as a line cook in the Michelin star-rated Petersham Nurseries Café and whipping up pastries at the legendary London bakery Konditor & Cook. After earning her MBA at the University of Edinburgh in Scotland, Barber decided to pack her bags and bring her expertise home. "I actually had a visa to stay in Scotland and open The Baking Hive there, but I felt strongly that I should come back home," she says. "I love my community, my family and friends are here, and it would be a shame to create this thing from my heart and not be able to share it with them."

When Barber wraps up a hard day's work baking luscious cakes and bars or teaching a group of local kids how to properly ice a cake, there are a few places near and far that serve up her preferred brand of comfort. "I love Chunga's [180 S. 900 West, 801-953-1840, chungasmexican.com]—their al pastor nachos are like crack," she says. "I also love Layla Grill [4751 S. Holladay Blvd., 801-272-9111, laylagrill.com] because I'm in that area. My favorite is their lamb meatballs when they're on the menu."

Though she's always passionate about baking and running one of the warmest and most inviting bakeries in town, working with sugar and spice makes savory food taste all the more satisfying. "Being around sweet stuff all day makes you crave that salty, cheesy decadent kind of food," Barber admits. "Indulgent savory food rejuvenates me, especially after working so hard all day. I feel like I deserve it."

Romina Rasmussen of Les Madeleines
Arguably one of the pioneers of Utah's now flourishing baking scene, Romina Rasmussen's Les Madeleines has been in business since 2003. Rasmussen was one of the first pastry chefs to replicate the now-ubiquitous kouign amann in the United States—and this was three years before Food & Wine Magazine named the buttery miracle Pastry of the Year.

Rasmussen's love of baking blossomed when she first started to share her tasty talents with friends and coworkers. "I think I enjoy sharing stuff that I make with others more than eating it myself," she says. Regardless of where she worked or lived, she always found herself baking something delicious and sharing it with coworkers and neighbors. She embraced the fact that owning and operating a pastry shop was her ideal vocation, and Les Madeleines was the result.

On the occasions when Rasmussen is in need of a culinary recharge, there's only one place that she trusts. "I'm a creature of habit, so I always go to The Copper Onion [111 E. 300 South, 801-355-3282, thecopperonion.com] to get their stroganoff," she says. "There's the pasta, the little kick from the crème fraiche and then the mushrooms are nice and meaty. My mouth is actually watering right now—it's perfection in a bowl."

Cory Hruska of Hruska's Kolaches
When Texas siblings Cory, Ross and Devin Hruska moved to the Beehive State, they discovered a land that was curiously devoid of kolaches. "We grew up eating kolaches down in Houston," Cory says. "Originally, they're a Czech pastry, but in Texas they took that idea and started stuffing the bread with breakfast food and other savory items." Armed with a recipe passed down from their grandmother, the Hruskas got to work mixing dough and taking names. They opened their first location in Provo in 2014, and expanded their operation to Sugar House a few years later.

As Hruska's does a damned fine job of making all the sausage, pulled pork and brisket that they subsequently stuff into buttery pastry dough in-house, it's a safe bet to trust Cory's judgment when it comes to lunch spots. "My go-tos are Even Stevens [multiple locations, evenstevens.com] for the pot roast dip, and SugarHouse Barbeque [880 E. 2100 South, 801-463-4800, sugarhousebbq.com] for their smoked chicken wings," he says.

Cory is also a fan of Eva [317 S. Main, 801-359-8447, evaslc.com], whose experimental menu approach is enough to keep diners on their toes. "I like Eva's because they try to do something different," he says. "They embrace the fact that they're experimenting so much, and they love hearing critiques; it's like a constant work in progress."

If you've never tried a kolache before, you're in luck—Hruska's annual Kolache Fest is scheduled to take place Saturday, May 5 at their Sugar House location.