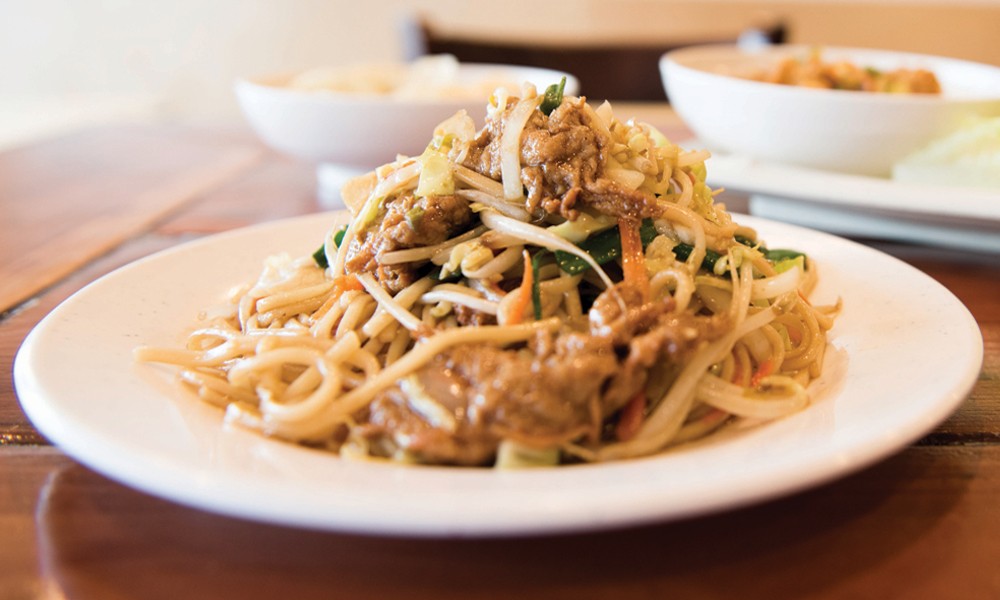 Salt Lake City: Your Vegan Destination
Leave your bland food expectations at the door at these six eateries.

Salt Lake is known as a vegan-friendly city, but now we're a full-on vegan destination. There's been a boom of vegan restaurants opening this past year (check out dining critic Alex Springer's recent takes on Boltcutter and Seasons Plant-Based Bistro), and it seems that everyone—vegans and omnivores alike—has been digging the animal-friendly fare.

Cinnaholic
Salt Lake City has been blessed with its own Cinnaholic. This national chain is famous for over-the-top gourmet cinnamon rolls that just happen to be vegan. Here, you can choose from a staggering amount of frosting flavors and delectable toppings like fresh fruit, marshmallows and cookie dough. I was a certified Cinnaholic after my first bite of a warm cinnamon roll with lemon frosting topped with juicy, tart raspberries. See what flavor combinations you can come up with, or order from the menu. 358 S. 700 East, Ste. D, 385-415-2744, cinnaholic.com

Veggie House
Veggie House will blow your mind. The menu is the definition of diverse—with everything from stir frys to pad thai you can mix and match with soy-based chicken, beef, shrimp and/or tofu for protein. You could probably eat at Veggie House once a day for a year and never eat the same dish twice. Whether you're craving something light and healthy, like pho, or you're in the mood for deep fried "chicken" in sticky, sweet orange sauce—you'll leave satisfied. Besides having excellent food, Veggie House is quick, inexpensive and has friendly customer service, to boot. 52 E. 1700 South, 801-282-8686, veggiehouseut.com

Lil Lotus
A casual eatery with a fun menu, Lil Lotus is a perfect spot for an inexpensive meal. Serving crowd-pleasing dishes like late-night Navajo tacos made with either chickpea chorizo or barbecue jackfruit and Southwest green chile mac and cheese, Lil Lotus appeals to every palate. Grownups eat for $9.95 and vegan-minded kiddos get to choose from a pared-down menu costing only $5.95. 2223 S. Highland Drive, 801-906-0637, lil-lotus.business.site

Vegan Bowl
West Jordan got a little cooler this year with the opening of Vegan Bowl, its first vegan restaurant. A spinoff of North Salt Lake's famous All Chay, they offer mouthwatering Vietnamese fare at a reasonable price. You gotta try the spring rolls, the pho and anything with their fried shrimp. Trust me when I say it's realistically shrimpy. 8672 S. Redwood Road, West Jordan, 801-692-7237, facebook.com/vietnameseveganbowl

The Pie Pizzeria
The Pie Pizzeria is the oldest, most beloved pizza place in town. So why are they on this list? They've updated their already awesome animal-friendly menu. You can build your own pie with tasty options like shredded seitan chick'n, vegan fennel sausage and ground "beef," or order a specialty pie like the vegan chicken ranch. Make sure to also order some toothsome meatless buffalo wings and pull-a-parts loaded with dairy-free cheese, dipped in pizza sauce, dairy-free ranch or both. Multiple locations, thepie.com

Vegan Agenda
Utah's first vegan convenience store/deli opened in the location that housed Frisch Compassionate Eatery and Cakewalk Vegan Baking Co. Since the owners of each business still run the place, you'll find a pastry case full of goodies baked by Cakewalk, and favorites from Frisch like tubs of eggless and tuno salad, freshly made soups, frozen handmade burritos and bags of their popular vegan jerky. They also have vegan soft serve. Think of it as a welcoming one-stop vegan shop that might change your perception on what's for dinner. 145 E. 1300 South, facebook.com/veganagendaslc