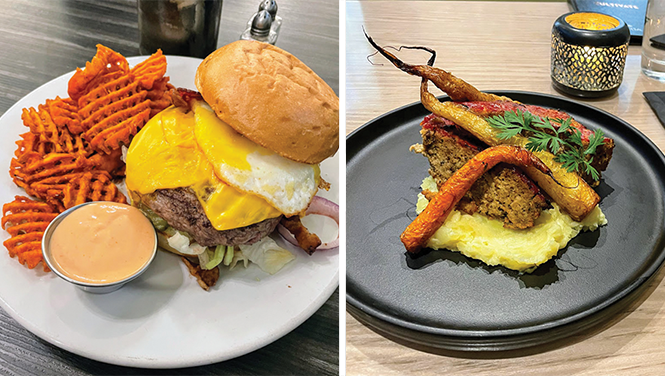 Without fail, the afterglow of City Weekly's Best of Utah issue leaves me with a plethora of recommendations for new restaurants to check out—you readers out there have pretty good taste. After hearing about how Cliff Dining Pub (12234 S. Draper Gate Drive, 801-523-2053, cliffdiningpub.com) snagged a Reader's Choice Award for Best Non-downtown Restaurant this year, it rose to the top of my list of places to check out. While on said assignment, I was intrigued by Cliff's sister restaurant Cultivate Craft Kitchen (12234 S. Draper Gate Drive, 801-274-4230, cultivatecraftkitchen.com), which inspired me to create a culinary double-feature for this week.

Cliff Dining Pub and Cultivate Craft Kitchen are, quite literally, sister restaurants, since they share ownership among Wendy & Jason Lewis and Matt & Nikki Mackay. This quartet of Draper-based entrepreneurs conceptualized both restaurants as a place for Draper residents to kick back with a variety of comfort-food favorites, expertly-made cocktails and a killer view of the Salt Lake Valley.

Cliff Dining Pub started the whole affair, but once its stylish but casual concept took off within the Draper foothills, the team decided to expand their vision of dining to Cultivate Craft Kitchen. Both restaurants capture the founders' vision of sophisticated interpretations of universally-beloved comfort food and an eye for trendy style that caters to the taste of Draper's upper East Bench. Though the two restaurants are next door to one another, the differences between them are just stark enough to warrant a visit to both spots—so that's what I did.

Even during the colder months, Cliff's elevated perch and well-curated interior space create an ideal destination for any family-friendly special occasion. As the Cliff Dining Pub menu has hitched its wagon to fancy reinterpretations of classic pub food, I planned my order accordingly. I went with some bacon-wrapped stuffed jalapeños ($13) and the Cliff Burger ($15) paired with a nice Kiitos Double IPA ($12), which provided an accurate snapshot of the Cliff experience.

As jalapeño poppers have never really made an impression on me during my many gastropub visits, I must say I was surprised by this punchy little shareable. The trick is the quality of peppers on the grill, and Cliff has picked out the good stuff. These peppers are plump, juicy and flavor-forward; yes, there's the obligatory kick, but these beauties really let you taste the jalapeño flavor. Oh, and did I mention they're stuffed with velvety cream cheese and wrapped in thick, smoky bacon? Because that takes this dish into the stratosphere. It comes with a bit of ranch dressing to cool things down, but fans of starting a meal off with a kick will enjoy this one.

The Cliff Burger is a textbook example of what a good pub burger should be. The buttered brioche bun houses a monstrous, cooked-to-order beef patty, more of that thick bacon, a vulgar amount of melty American cheese and a lovely fried egg with just a bit of runny yolk. It's the American cheese and fried egg that really sell this burger, but its foundational elements aren't messing around, either. This is a dinner-sized burger that goes very well with some sweet potato waffle fries and a glass of local craft beer from Kiitos Brewery.

Once you venture next door to Cultivate, it's easy to tell they were envisioned by the same people. It shares Cliff's rustic chic decorative sensibility, and those sitting in the bar area are lovingly watched over by a gigantic mural photograph of a noble sheep. Where Cliff Dining Pub maintains more of a kid-friendly, neighborhood gastropub kind of vibe, Cultivate is a place to enjoy when the kids are at grandma's. As someone who appreciates both types of destinations, I can't get over how nice having both options right next door to one another is.

At Cultivate, I tried the toffee brie ($11) and the meatloaf ($30). The brie comes in tiny scoops on a plate with honey-drizzled toast, and it creates a nice palate primer for anything rich and savory. Whenever a swanky place like Cultivate offers something like meatloaf, I have to check it out; despite meatloaf's humble origins, it creates a fantastic blank canvas for talented chefs to work with. When my plate arrived and I could see the caramelized ketchup—technically it's cranberry ketchup sauce, but that's all the better—layer on top, I knew this had been crafted by someone who understands meatloaf on a spiritual level. The fact that it's made with a ground pork and beef mix, infused with roasted garlic and black truffles, doesn't hurt things one bit. This is a tender, savory and delicious love letter to meatloaf, and its supporting cast of white cheddar mashed potatoes and roasted heirloom carrots adds a perfect balance to this classic dish.

I've been hanging out south of the Salt Lake City limits lately, and it's been fun to see what cities like Draper have to offer. Those looking for a nice variety of excellent food and finely crafted libations just need to head up the mountain and seek out Cliff Dining Pub and Cultivate Craft Kitchen.