From the Mountain to the Tower 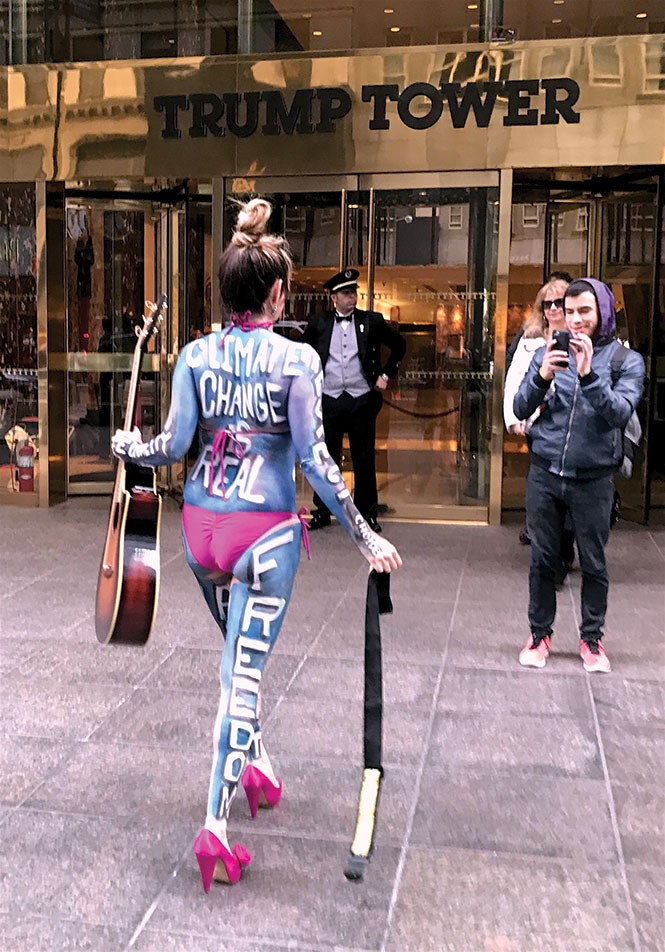 Utah is filled with vast expanses of beautiful land, some of which has been deemed culturally important enough for the federal government to apply national park designations on them. Despite the state's important role in the U.S. National Park Service, it's also home to Rep. Rob Bishop, one of the park service's most vehement opponents. This apparent juxtaposition makes it all the more poetic that a Moab-based singer/songwriter like Gigi Love would dedicate her most recent album to our country's national parks—and take that dedication straight to Trump Tower's front stoop.

After creating an impressive discography that began with 2001's stark and vulnerable Coyote Bones (LoveCha), Love decided to tackle something more ambitious. "I was getting really frustrated with my songwriting," she says. "I felt like I kept writing about the same issues." On a trip to Yosemite National Park, Love happened upon a rock climber who offered to sell her his mandolin for gas money. She took him up on the deal, and used the serendipitous occasion to pen a song about her Sierra Nevada surroundings. "The song for Yosemite came really easily. Then I had this idea that I should visit all the national parks and do a character study about each park," she says.

"Yosemite Gold" became the first of 12 songs that comprise National Parks Centennial Songs (GigiLove.com), which came out last month—on the tail end of the 100th anniversary of the National Park Service. In every sense of the term, this album is a true labor of love. The songwriter visited parks throughout the country—from Yellowstone to Acadia—and created songs that captured the experience. "I'd go to each park and backpack, river raft or go horseback riding," she says. "I would go to the visitor center and learn everything I could about the park, and I would even talk to the park volunteers and ask them what they would like to hear in a song about their park."

The result is an audio cross-country road trip with Love's earnest, golden voice behind the wheel. "Blueberry Kisses in Acadia" is a subdued folk gem; "Coast Starlight to Crater Lake" channels Jimmy Buffett's laid back beach rock into a sunny travelogue; and "Pele's Fire" is a ukulele-centric trip to the Hawaiian Islands. "I did want to gear my songwriting to a broad range of people," Love says. "I want people to pop it in and get something very American and grassroots that they can hold on to."

Part of the impetus to become the musical representative of the national parks came from an unexpected opportunity to become Amtrak's first Trails and Rails Troubadour. The Trails and Rails program is a partnership between Amtrak and the National Park Service to provide travel routes that focus on the country's national parks. When the program's director Jim Miculka happened to see Love performing at the Bright Angel Lodge in the Grand Canyon, he asked if she'd be interested in performing on the routes. "My husband and I had the next few weeks free, and we accepted. We ended up going on the train from L.A. to Portland on the Coast Starlight, where I sang three times a day," she recalls.

Because of the close relationship she forged with our national parks, Love found herself wanting to do more to raise awareness for the trouble they're facing. "I got really fired up when I heard that Trump was denying climate change," she says. While visiting New York City in November, Love was inspired by the artistic community in Washington Square Park. "There were artists, painters, musicians—all these people were doing shit in the middle of Washington Square. No one was intimidated."

Bolstered by this artistic spirit, Love asked herself, "What would John Lennon do?" Of course the answer was to protest—but Love did it her way, donning a pink bikini and asking one of the artists in the park to turn her body into a living billboard for raising climate change awareness. Then, covered neck-to-ankle in blue, black and white paint and armed with only her acoustic guitar, Love defiantly headed up the street to Trump Tower. Amid spectators, passers-by, photographers and a contingent of riot police, she stood before its golden doors, singing and calling on The Donald to recognize the realities about our endangered planet.

How Love avoided a righteous, jackbooted beat-down is anyone's guess. Well, OK—she took a cue from the Book of Donald and lied. "We made it through three levels of riot police," she says. "All I did was told them that I was going to Gucci, and they had to let me pass. I played for about a half-hour before the cops kicked me out of there."