A visit to Ogden's most eclectic eatery 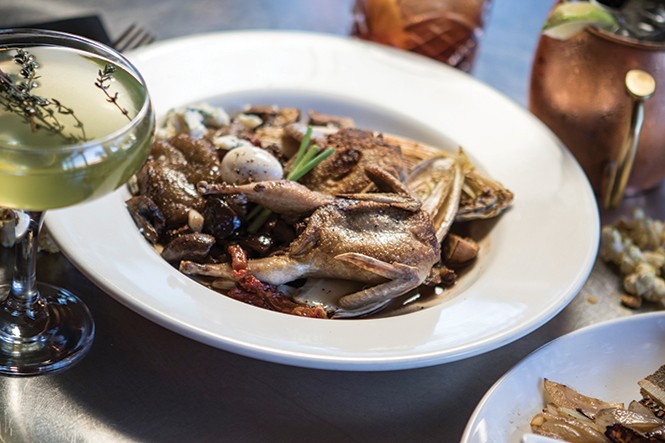 I have been rooting for restaurateurs Shana and AJ Hubbard, since they first opened Jasoh! on Harrison Boulevard in Ogden a dozen years back. Jasoh! eventually relocated to 25th Street and then, in 2013, was rebranded as Hearth on 25th.

I confess I root for all restaurateurs; I never want any of them to fail. However, my desire to see the Hubbards succeed has to do with their daring. They don't play it safe when it comes to the food and drink they proffer, and never have.

Exhibit A: Who else would have the chutzpah to put yak tartare on an Ogden menu, grass-fed or otherwise? And, given that yak in any form has got to be a pretty hard sell, charging $32 for grass-fed yak tartare seems downright audacious. I can't really imagine they move a lot of yak tartare at that price—or, for that matter, seared yak steak at $44. Yes, sticker shock is a reality at Hearth on 25th, where $45 will get you an 8-ounce steak au poivre, and "street tacos" go for $18. This certainly must be Ogden's priciest restaurant.

But as the saying goes, you get what you pay for. And I am not one to shy away from expensive eats. In fairness, you could belly up to the bar at Hearth—called The Title 32B Lounge (named fafter Utah's266-page Alcoholic Beverage Control Act)—for craft cocktails with hand-cut, reverse osmosis ice and an order of $5 popcorn. It's cheaper than at a movie theater.

Hearth on 25th isn't called "Hearth" for nothing. The centerpiece of the kitchen is, indeed, a hearth—specifically, a Tuscan wood-burning oven used to bake breads and pizzas, roast meats and seafood and fire hot desserts.

It may seem a little nutty to pay $15 for something normally tossed to pets. But, once you've developed a crack-like addiction to bone marrow, the sky's the limit. The wood oven-roasted bone marrow at Hearth is a little unusual, insofar as the beef bone (femur) is cut in half lengthwise, as opposed to the customary cross sections. The 16-inch-or-so half-cut bone does make for a striking presentation, however. If you've never had bone marrow, it tastes a bit like warm foie gras—nutty and buttery. At Hearth, you'll spread it on thick slices of house-baked sourdough toast served with roasted heirloom pepper relish, apricot mostardo and caramelized onions.

I love stroganoff, so I was immediately attracted to Hearth's "Slow Food Stroganoff" ($26). It's described on the menu thusly: "braised local Angus beef, Ballard Farms Berkshire pork, mafaldine noodles, hearty brown sauce, caramelized onions & mushrooms, stone ground mustard crème fraîche, dehydrated mustard and fresh chives." Hearth's homemade mafaldine is excellent: thick, pappardelle-style pasta with curly edges like lasagna. Unfortunately, the stroganoff overall was disappointing. Rather than thin slices of tender beef that are the norm, this stroganoff contained stringy, dry strands of beef that could easily have been were remnants of a French dip sandwich or the beef short ribs on the menu. And, there was little of it to boot. Mountains of mushrooms all but obliterated what little beef there was in the dish, and I didn't detect any pork—Berkshire or otherwise—at all. The flavor was bland and lacked seasoning. We had to ask for salt and pepper.

A much more satisfying entrée is the quail and dumplings ($28). It consists of seared-then-braised tender quail in a hearty chasseur sauce with lots of wild mushrooms, pancetta, small blue-cheese dumplings, grilled endive and pickled quail egg. The pickled egg did nothing to advance the quail dish, and seemed just plain unnecessary and out of place. But overall, the quail is a very good menu selection.

Just because you can cook everything in a wood-fired oven doesn't mean you should. I refer here to Hearth's apple bread pudding. Now, I tend to think of bread pudding as a dessert that could best be described as moist; hence, the word "pudding." But this bread pudding was just slightly soggier than salad croutons, the torn pieces of bread seemingly having met their demise in that hot wood-fired hearth.

Utah's culinary scene could surely benefit from more risk-takers. And, despite Hearth's sometimes uneven results, I will continue to root for all of them.