If the Choux Fits 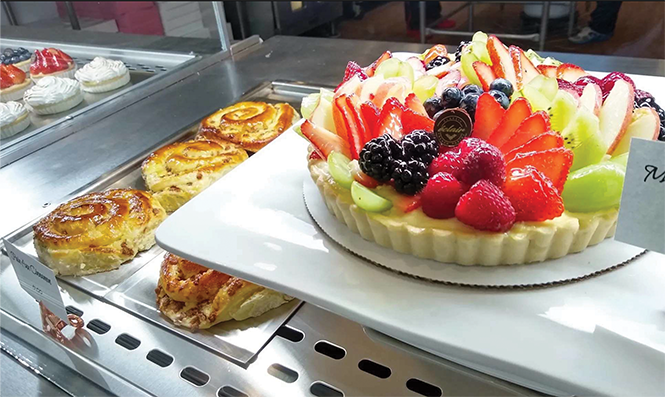 The expectation of variety is both a blessing and a curse for modern American bakeries. As much as I love heading into a bakery that is well-stocked with everything from sourdough bread to baklava, I have learned to appreciate the fruits of discipline and specialization. While we have plenty of amazing bakeries that specialize in different regional menus, it's rare to find a spot like Éclair French Pastry (7948 S. 1300 East, 385-259-4100, eclairslc.com) that sticks with one particular item. As the name implies, Éclair is all about the holy trinity of pâte à choux, pastry cream and chocolate ganache that comprise one of the most venerated pastries of all time.

Éclair French Pastry got its start when owner and head pastry chef Youssef and manager Jacque Newman opened their first location on 2112 E. 1300 South. As longtime friends, Youssef and Newman based the idea for their bakery around Youssef's éclair recipe, which originated in an 18th-century French cookbook, according to Newman. With a killer éclair recipe in hand and a creative approach to variation that has launched nearly 20 different flavors of éclair, it didn't take long for Éclair French Pastry to require expansion. To accommodate their growing business, the team recently relocated to their current spot in Sandy's East Bench.

When I stopped by to check out their new digs, I had the chance to talk with both Newman and Youssef about their bakery and the concept that has been a local crowd pleaser since its arrival. "When we were closer to Sugar House and Downtown, our kind of bakery was expected," Newman says. "In Sandy, we're a bit unexpected, which is what has brought people to our door."

The focus on eclairs also has plenty to do with the bakery's popularity; most Utahns were raised on the mediocre versions whipped up by the dozen in grocery store bakeries. The offerings at Éclair are made with such care and technique that it's visible from the moment you enter.

The entry point for a first-time visit to Éclair is the classic chocolate vanilla éclair ($5). As this flavor combo is the most ubiquitous across all bakeries, it's the best way to get a bead on what Éclair is all about. Each order is lovingly plucked from a gorgeous display case, where the day's items lounge on their trays like Hollywood starlets sunbathing poolside. The eclairs here aren't the stubby, potato-shaped pastries that we tend to think of when we order up eclairs outside of Europe, but are long, thin and filled to the absolute limit with silky pastry cream.

The classic is a prime example of how a conceptually simple creation such as an éclair can be transcendent if each component is executed to perfection. The choux was precisely the texture it needed to be—a bit of toothsome bite on the outside that yields to a buttery chewiness once you get near the center. The pastry cream was velvety smooth, packed just the right balance of vanilla flavor, and filled every nook and cranny of the pastry's interior. Oh, and that chocolate ganache on top was stellar—thick, rich and just sweet enough to turn your knees to jelly.

While trying the whole gamut of the flavors available at Éclair was tempting, I had to realize my own limitations. In addition to the classic, my lineup included cookie butter ($5), lavender ($5), mocha ($5) and almond. The cookie butter éclair is ideal for those who like a bit of excess in their desserts. It's piped full of cookie butter filling, topped with healthy dollops of whipped cream and crowned with a single Biscoff cookie. I always respond positively when bakers merge multiple desserts into one, so this éclair that is also a cookie ranks pretty high for me. The almond and mocha eclairs were also solid; it's clear that balancing tricky flavors is one of Youssef's superpowers.

A good example of this came when trying the lavender éclair. My first bite was of an unfrosted section of the éclair's undercarriage, which made me think the lavender flavor was a bit too strong. Once I resumed eating and got an equal share of the icing, I was amazed at how well its flavor balanced out the lavender filling. It's moments like these that make one realize the true talent behind something as deceptively simple as an éclair.

In addition to their staggering variety of éclair flavors, Éclair French Pastry also offers delightful tarts, jewel-toned macarons and an international weekend brunch that celebrates the cuisine of the world. Newman was also quick to mention that Éclair offers classes for those interested in perfecting their tart crust or whipping up a batch of thin sable cookies. Overall, Éclair is a great addition to the area—the more locally-owned niche bakeries we have along the Wasatch Front, the better.