A classic New England favorite is alive and well along the Wasatch Front. 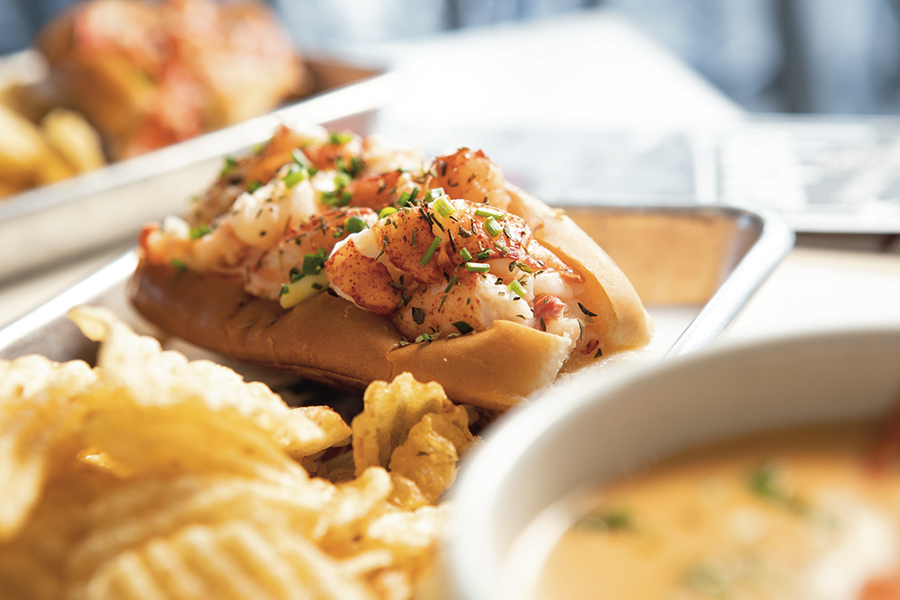 Tracing its origins to a restaurant named Perry's in Milford, Conn., back in the 1920s, the lobster roll is the definition of summer cool. Until recently, the closest I'd ever come to a genuine one was the seafood sensation at my local Subway. While I will always retain a nostalgic, self-loathing kind of love for the Subway creation, I'm glad that we've got a few places that are flying lobster into Utah to be piled high on one of New England's finest dishes.

Not only have I come to appreciate the complementary flavors of butter, lemon and freshly prepared chunks of lobster meat, but there's also something delightfully anarchic about taking this A-list ingredient, slathering it in mayo and serving it up on a bun with a side of fries or crinkle-cut potato chips. While this beach bum presentation is only slightly more cost-effective than ordering steamed lobster at a steakhouse, I can't help but think that each roll I eat helps stick it to those stuffy steak-and-chop houses and their lobster-with-a-bib agenda.

Currently, we have two lobster roll powerhouses within state boundaries, both of which started their rise to local prominence roughly three years ago. Slapfish (slapfishrestaurant.com) is a franchise based in Huntington Beach, Calif., which turned to Lehi as the site of its first out-of-state venture in 2017. Founded by Andrew Gruel, it made a name for itself by sourcing seafood from Golden State docks and ensuring freshness regardless of travel time. Gruel said it best when he told Forbes that he wanted Slapfish to be the "Chipotle of seafood."

Freshie's (freshieslobsterco.com), meanwhile, is a local restaurant that has been making lobster rolls for the Park City crowd via their food truck since 2013. Three years into it, owners Lorin and Ben Smaha opened their first brick-and-mortar store, and this growth soon expanded to downtown SLC with the opening of their second location last year. Where Slapfish gets its seafood from California, Freshie's gets theirs from Maine—the Smahas are originally from New England, which is where their seafood loyalties lie.

The honor of who got here first belongs to Freshie's. Long before the Smahas started their food truck, they made a name for themselves serving up fresh lobster rolls at local farmers markets. "We started selling them because we couldn't find any lobster rolls out here," Lorin says during a recent phone interview. "It's a very common sandwich back East, and very uncommon here." In 2017, Freshie's took home the prize of World's Best Lobster Roll at the Down East Lobster Roll Festival in Portland, Maine.

With Freshie's earning national accolades and Slapfish opening its first non-California location, it was a big year for Utah lobster fans. Now that some time has passed, however, it's time to dig deep and get a sense of which place is worth your money. Lobster rolls aren't cheap, after all.

From the traditionalist standpoint, Freshie's should take this prize, since they're using genuine Maine lobster. As the sandwich was invented on the East Coast, the lobster rolls at Slapfish should be immediately disqualified. But we aren't on the East Coast, are we? Since I'm a born and bred Utahn, I've got no decapod in this fight, so let's break it down by the numbers.

Freshie's XL lobster roll (pictured) and Slapfish's traditional are roughly 6 inches long, and though Slapfish sells their roll at market price, the last one I got ran me $25, which is a buck less than Freshie's flat rate. Freshie's does have the option of smaller sandwiches that are a little less spendy—the Real Mainah ($21) and the Tourist ($12) are good options for those in need of a smaller but more economical dose of lobster roll goodness. So size and price are pretty much neck and neck, but Freshie's does offer some variety in this department.

I was intrigued to see that Freshie's uses lobster tail meat in addition to claw meat, which is the exception, not the rule. "A lot of places just use claw and knuckle, but we like the texture of tail in ours," Smaha says. "It's just one of those things that has every element you want when you bite into it." While there's nothing wrong with lobster claw and knuckle meat, Slapfish does lack the lobster tail meat in their roll which takes it down a peg—the more tail the better, I say.

Overall, it's tough to go wrong with either place, but Freshie's ends up walking away with my vote. They've made lobster rolls the focal point of their whole operation, and it's paid off. It's easy to taste all that effort and wicked love with each bite of those tasty gobs of lobster goodness.