Mall in the Family 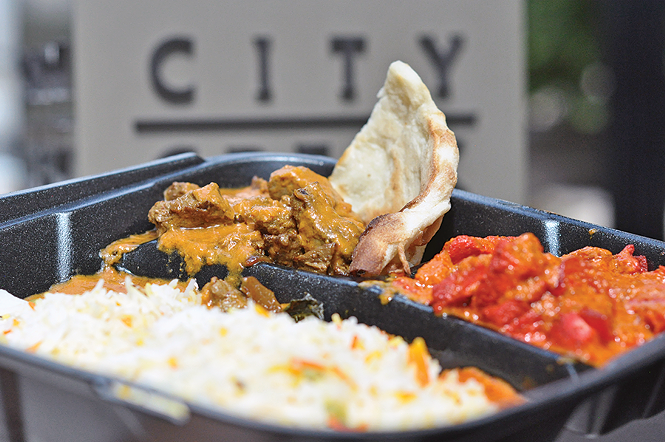 When shopping malls began taking over the nation's commercial areas in the 1980s, the inclusion of a food court offered shoppers a way to spend all day in their air-conditioned embrace. Much like the invention of the all-you-can-eat buffet along the Las Vegas casino circuit, furnishing a spot where shoppers could get a quick bite to eat and then head back to the retail races was a great way to maximize profits. Although the inclusion of a food court was more a fiscal than a cultural decision, those malls had a big impact on how Americans view food on the go. With all that shopping and entertainment within walking distance, the mall food court became the all-American version of tagine hawkers in Marrakesh or stir-fry vendors in Bangkok.

While traditional street-food culture followed its torchbearers from Mexico, Brazil, China and Singapore as they established their own communities in cities like New York, Chicago and Los Angeles, widespread mall culture left an open door for fast-food corporations to fill that street culture niche. It's a legacy that we still see today as our major shopping centers come equipped with their own dedicated eateries. I'm not saying that our distinctly American take on street food is a bad thing—have you ever had a piping hot, foldable slice of Costco pizza?—but there is something lopsided about letting fast-food heavy hitters have the only seat at the table.

During a recent trip to City Creek Center (50 S. Main, shopcitycreekcenter.com), Salt Lake's own little hub of rampant consumerism, I couldn't help but notice that the fast-food all-stars' hold on the food court was disrupted by a few plucky local joints. Yes, McDonald's, Chick-fil-A and mall pizza powerhouse Sbarro maintain a strong presence, but City Creek has also welcomed local restaurants into its glittering ranks.

The most striking contrast about sidestepping the big guys for some local flavor is that places like Taste of Red Iguana (rediguana.com), Tibet Bowl & Sushi, Bocata (bocatasandwich.com) and Zimbu (zimbuslc.com) were inspired by the street-food culture of their respective cuisines—plus, they're among the only ways to deviate from the food court's trademark burger and pizza fare. Although it's easy to be taken in by the familiar lull of the fast-food giants, it's well worth trying out a few of these local gems while you're maxing out the credit cards.

As a sister location to one of Salt Lake's most popular Mexican restaurants, Taste of Red Iguana offers daily specials taken from its predecessor's menu. The enchiladas suizas ($8.59) are always a safe bet. Two chicken enchiladas topped with Red Iguana's famous mole poblano packs all of the richness and depth that the Cardenas family's traditional moles are known for. You'd also be hard pressed to find a better home for your tortilla chips than their house-made salsa—the flavors of tomato, onion and cilantro are balanced with just the right amount of heat.

If you're after a sandwich, the bocadillos at Bocata are perfect alternatives to the ubiquitous panini. The first thing I noticed as I looked over the menu was the brick oven that the Bocata staff uses to bake their bread. It goes in flat like pizza dough, and rises just enough to get sliced in half and stuffed with grilled chicken or roasted pork. The BLT with egg ($8.50) is a textured take on a classic that adds just a touch of sophistication with its arugula and organic egg. You get everything you'd hope for from a traditional BLT, but the luxurious egg yolk evokes a breakfast vibe that becomes far greater than the sum of its parts.

Zimbu's menu of Indian and Nepali cuisine lends itself well to the "fast casual" paradigm, and the sheer combination potential warrants repeat visits. The plate meal ($8.99, pictured) lets you choose two entrees from a tantalizing list of paneer, vegetable kofta or chicken tikka and then two traditional sauces like curry, makhani or tikka masala. It's hard to suggest just one option when they're all so good, but that makhani sauce could make a leather boot taste good.

Lastly, no trip to City Creek would be complete without ordering the City Creek roll ($9.35) from Tibet Bowl & Sushi. This roll is a great way to commemorate our gigantic shopping center, not to mention the fact that it gets doused with oil and immolated on a cast-iron skillet while you watch. The presentation factor here is fantastic, but once you free this roll from its tinfoil casing, all that fresh sushi flavor gets jacked up by the subtle smokiness.

Since City Creek has opened, I've noticed a distinct uptick in the amount of local talent in our mall food courts. The Shops at South Town welcomed the team behind local food truck Special Courses to its food court, and Fashion Place's remodel included space for places like Arancini Snack, which is also locally-owned. It's a trend we're starting to see on an even larger scale with projects like the Salt Lake International Airport expansion, which actively sought out local restaurateurs to set up shop in its upcoming dining areas.

Although I doubt Salt Lake City will be developing a Singapore-level street-food scene any time soon, it's definitely been fascinating to see how our local restaurants have made mall shopping a more diverse culinary experience. Next time you're doing some hardcore shopping, skip the familiar faces and see just how well curry can complement a new pair of shoes.