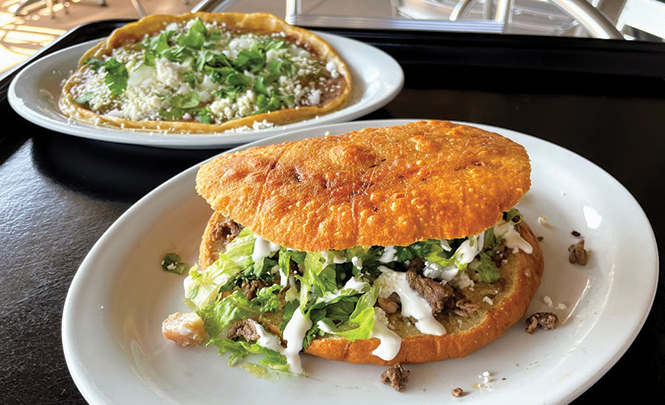 A few weeks ago, I went to a friend's house to eat nachos and watch horror movies. On my way home, I noticed this hunting lodge of a building that was across the street from the Herriman city hall, right next to the gigantic JL Sorensen rec center. From afar, the building read restaurant to me, but considering its location smack dab in the middle of the Herriman suburbs, I second-guessed myself.

Sure enough, as I got closer, I could see the illuminated sign for La Garnacha (5418 W. Main Street, Herriman, 385-695-5871, lagarnachautah.com), a Mexican restaurant whose niche is serving up Mexico City style comfort food. After perusing their menu online, it became a moral imperative to pay this hidden gem a visit.

It shouldn't be a secret that Mexican food in all of its wonderful variations is quite special to me. All the same, I fully realize that the Wasatch Front is home to a broad spectrum of Tex-Mex or otherwise Americanized Mexican establishments. So, when I dug into La Garnacha's menu of eats culled from the culinary traditions of Mexico City, I got a little tingly. Though Central American cuisine is full of diversity, it can be risky to open a Mexican restaurant that doesn't stick to the basics to which stateside diners have grown accustomed. If, like me, you enjoy a deeper dive into a cuisine from another part of the world, then you're going to have a good time at La Garnacha.

Though the menu at La Garnacha boasts a few unique bangers from Mexico City, you've also got your share of familiarity. Tacos ($3.25) are prepared street cart style with fillings like steak, chicken, chicharron, even beef tongue if you're feeling saucy, but you can also get vegetarian fillings like zucchini blossom and nopales. There is nothing wrong with the tacos here—in fact, the vegetarian options are a great change of pace for those a bit burned-out on tacos al pastor. But if you're coming to La Garnacha, you'll want to check out their signature items.

I was ecstatic to see that one of these items, the overstuffed crimson dynamo known as a pambazo ($11.50), is an insane sandwich. Central American food is high on my list of comforting favorites, but Central American sandwiches—tortas, lomitos, arepas—complete me. The pambazo simply continues the perfect record that sandwiches from this part of the world have. It starts with two slices of pambazo bread (a thick but porous concoction) that get dunked in some guajillo salsa and then slapped on the griddle for a nice crispy finish. The basic pambazo at La Garnacha is stuffed with lettuce, onions, queso fresco and a blend of potatoes and spicy chorizo.

Like many sandwiches from Central America, the pambazo is a celebration of multiple flavors and textures. Though the pambazo bread has a toasty crunch on the top and bottom of the sandwich, the edges of the bread soften up as a result of all that smoky guajillo salsa. The soaking method is a great way to include salsa in a sandwich, and the flavor of the pambazo bread alone will leave you licking the fiery red remnants off your fingertips as you go.

Inside the pambazo is a traditional mixture of cubed potatoes and chorizo, bringing to mind a spicy breakfast hash. For two bucks more, you can add your choice of protein from their list of carnivorous and vegetarian options, which I would only recommend if you're extremely hungry—the pambazo is much larger in person than it appears to be in photos.

The second sandwich on La Garnacha's menu is the gordita ($9.50), which is a bit more like an arepa in presentation. It's a crispy corn tortilla that has been sliced open and stuffed with chicharron, lettuce, queso fresco, cilantro and onions. The biggest difference between the gordita and an arepa is the thickness of the tortilla—though the gordita roughly translates into "little fatty," its tortilla is a bit thinner than its arepa cousins. Despite its lack of girth, it still manages to keep all that tasty filling inside, and offers a nice crunch with each bite.

La Garnacha's other specialties include two varieties of thick, crispy corn tortillas topped with various delicious goodies. The sope ($8.50) is a round tortilla whose basic iteration comes topped with beans, salsa verde, queso fresco, cilantro and onions, and the huarache ($12.50) is a larger, oblong-shaped version; it's like the sope's older sibling. Like the pambazo, each of these items can be tricked out with extra toppings for a few bucks more. I liked these a lot—that salsa verde simply sings with bright and herbaceous flavor—but they are definitely part of the menu's supporting cast instead of the main attraction.

While La Garnacha is a bit out of the way for downtowners, its unique Mexico City-inspired menu, comfy digs and ample parking, create a dining experience that is well worth a visit.