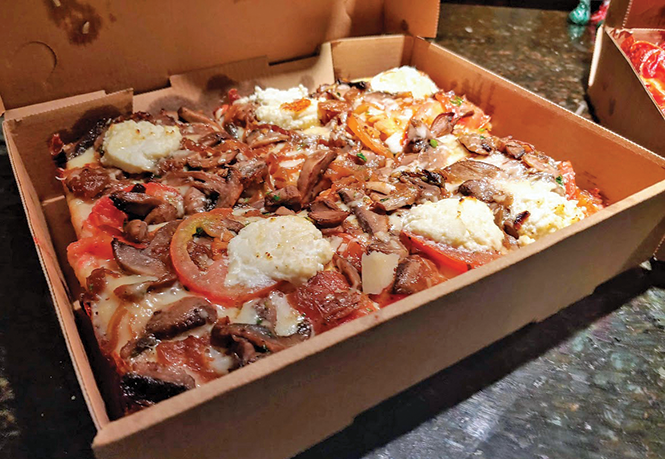 While Utah's pizza scene is built on a strong foundation of classics, the pizza renaissance that we're currently experiencing has me all kinds of excited. Over the past few years, we've seen pizza variations that range from foldable, thin-crusted New York-style to dense, marinara-infused Sicilian. I thought I was well on my way to becoming a local pizza scholar, until I learned about the arrival of Bricks Corner (1465 S. 700 East, 801-953-0636, brickscornerslc.com). This recent addition to the Liberty-Wells neighborhood specializes in Detroit-style pan pizza, a style of pie that I knew nothing about. With pizza being so near and dear to my heart, I set out to fix my life.

According to Bricks Corner's owner Josh Poticha—an industry vet who has worked with chefs like Wolfgang Puck and Emeril Legasse—Detroit-style pan pizza is a variation on the Sicilian. The difference? It was first baked in an automotive parts pan by a visionary employee of Ford Manufacturing. The steel parts pan retained enough heat to make the edges and bottom of the crust extra crispy, while the dough inside stays nice and fluffy. Nowadays, of course, Detroit-style pizza is baked up in specially made steel pans that caramelize the cheese that is liberally spread all the way to the edge. Though it's been a Motor City staple since the 1950s, it's only been on the national radar for the past five years or so, which is a damn shame.

Poticha's decision to bring Detroit-style pizza to Salt Lake City is a mixture of experiential instinct and an admiration of the Greatest Snow on Earth. "I came to Utah on a snowboarding trip to Snowbird about six years ago, and fell in love with the place," Poticha says. While looking for a place to expand—he also owns a bar and grill in South Carolina called Bricks on Boundary—he saw the space near Liberty Park open up, and decided to bring his expertise to the Beehive State.

Since pizza is the name of the game at Bricks Corner, I placed a takeout order online and popped in to pick up my stack. Though I was only inside the restaurant for a few minutes, the space struck me as simultaneously hip and accessible—I cannot wait to become a regular fixture here on weekends once the world is no longer on fire. From the backlit bar to the neon accents to the locally sourced pizza monster mural behind the cashier, it's a perfect space for lengthy conversation over melty, cheesy pies. Oh, and what pies they are.

I went for the Randazzo ($15), named for late Detroit-style pizza pioneer Shawn Randazzo, and the Creamy Mushroom Afgoo ($17). Those new to the Detroit-style concept should definitely start with the Randazzo. Like a Sicilian pizza, it gets a thick shingle of pepperoni on top of the crust before getting hit with cheese, more pepperoni and red sauce. As promised, the edges of this pie are joyously crispy, while the interior dough puffs up for a more yielding chew. It's a pepperoni pizza-lover's dream come true; there's close to a metric ton of pepperoni hiding beneath all that bubbly cheese.

The Afgoo is topped with a spread of olive oil and smashed garlic topped with sautéed mushrooms, caramelized onion and little gems of baked truffle ricotta. While it doesn't skimp on the toppings, this pizza is ideal for those after something on the light and fresh side. The flavors here are more subtle and dispersed, letting you appreciate every bite for different reasons—except when you get a mouthful of that baked truffle ricotta, which is a creamy, savory testament to the magic that cheese can create on the tongue.

Of course, these two pies only scratch the surface of what's going on at Bricks Corner. The Sweet Salty Pig ($17) combines pork shoulder burnt ends with applewood bacon, bread-and-butter jalapeño chips and a spicy firecracker ranch which is perfect for barbecue fans. Those equally fond of meats and not snobby about a bit of fruit on their pizza will enjoy the Polynesian Pie ($18) topped with grilled Spam, Canadian bacon and grilled pineapple.

Pizza should definitely be on the agenda for any visit to Bricks Corner, but those eager to traverse the full menu will like the Sasso Tots ($12), a glorious pile of braised beef shoulder, caramelized onions and melted mozzarella cheese, or the Corner Burger ($12) with two quarter-pound sirloin patties, American cheese and onion jam on a buttery brioche bun. Bricks Corner also features a fully-stocked wine, cocktail and spirits menu packed with local favorites from High West Distillery and Dented Brick Distillery.

Regardless of what you're craving, Bricks Corner is a love letter to the neighborhood pizza parlors and watering holes that Poticha grew to love while living in Chicago. There's a unique presence within those walls, and it has a way of zapping you out of our current nightmare reality into a place filled with good music, perfect lighting and bubbling slabs of homemade pizza.