One Republican state senator sought pain relief in Colorado. After testing it himself, he now wants to legalize medical marijuana in Utah

What a long, strange trip it's been for Sen. Mark Madsen, R-Saratoga Springs. In February, the conservative Mormon lawmaker and grandson to the late LDS Church President Ezra Taft Benson trekked across the state line to a Denver hotel room to ingest a cannabis gummy and inhale a dose of marijuana through a vape pen. But make no mistake: The libertarian-leaning senator wasn't there to party. He was doing his own personal research to determine if Utah should continue its ban on medical marijuana.

After seven hours behind the wheel, this long, strange trip had indeed left Madsen's back aching. For years, Madsen has suffered from chronic back pain that has required multiple surgeries paired with opioid prescriptions to manage the pain. By the time he rolled into the Mile High City, he was ready to test an alternative to pain meds and see first-hand if there could be benefits from legislation that would allow for growing, dispensing and using medical marijuana in Utah.

With his wife watching him, Madsen vaped the magic dragon and, then, he was ... well ... disappointed.

"Frankly, I was kind of let down for all the hype. I remembered back to my first DARE class in sixth grade, and I was thinking, "When is this huge mental contortion going to overcome me?' " Madsen says. He recalls the subtle sensation that things were now more vivid, that the music he liked before he really liked now and that, all of a sudden, room service sounded pretty appetizing. He also realized that his back felt much better and, for all the hype, the gateway drug hadn't changed him much.

It was then that the lawmaker had perhaps his first grass-powered epiphany: "My heavens! Reefer madness is just propaganda," Madsen recalls thinking.

You Have Your Own Choices

Of course, Madsen wasn't there seeking relief just for himself. He had long been considering whether Utah should be the next state among 23 others (24 if you include the District of Columbia) to offer medicinal marijuana as an alternative treatment option for patients stricken by pain and desperate for options. If it passed, Madsen's proposed bill (not yet numbered at press time) would be a historic first for Utah, assuming Madsen can get his colleagues to support it and Gov. Gary Herbert (who has already said he does not support medical marijuana) to sign off on it.

The bill's passage is a big if, especially given the Swiss-watch efficiency needed to get intricate wheels of state agencies to interlock and create an entirely new industry of stand-alone medical-marijuana dispensaries. For Madsen, who is retiring from the Legislature and won't run for re-election in 2016, it's a fight worth going out on. Madsen knows how divisive marijuana can be among his fellow LDS lawmakers and constituents—he himself discussed his decision to use marijuana with his LDS bishop before embarking on his research trip. But he also knows that if his colleagues can focus on marijuana as medicine, they will appreciate that the government has no place in doctor/patient decisions.

Politics are always personal, and while individual liberty is key for Madsen, the issue runs deeper for his family since his wife's mother passed away in October 2014 after a tough bout with breast cancer.

Madsen's wife, Erin, says that in her mother's waning days, her pain-management options were limited. Even opioid prescriptions such as fentanyl patches presented a problem for her mother, since the patches require a certain amount of body fat on a person in order for them to absorb the drug safely. "She was only 80 pounds," Erin says. "She didn't have any fat left on her." 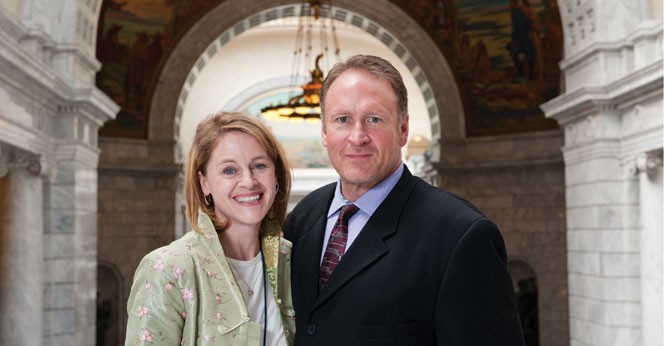 According to Erin, the bill is intended for law-abiding people. "People that aren't law-abiding are already doing whatever they want. This is for people stuck between a rock and a hard place."

The challenge Erin sees is getting people not to immediately associate marijuana with the image of a couple of slackers smoking weed in a basement. "But how do you get from there to seeing my retired schoolteacher mom who was just metastasized down to the bones?" Erin asks.

Madsen's Senate office is a veritable shrine to individual liberty. His bookcase is filled with tomes written by the likes of Ayn Rand and Thomas Friedman. A TV constantly streams Fox News in the corner, while above it a sign bearing the image of an armed figure reads: "An armed man is a citizen, an unarmed man is a subject." But don't expect to see any marijuana-leaf miniature flags festooning Madsen's desk, and there never will be, even if the issue of medical marijuana should come to define his legislative legacy.

Madsen stresses that the conceptual framework of the bill he shared with City Weekly will likely be tweaked during the legislative process.

For his bill to stand a chance of passing into law, Madsen knows that people need to think about marijuana differently. To that end, Madsen's bill will not legalize the smoking of medicinal marijuana. Not only does he think that smoking is an ineffective delivery mechanism, but he says smoking simply should not be encouraged. He wasn't even particularly fond of the vape pen he inhaled in Denver, since using it made him feel like Franklin D. Roosevelt, a president famous for his long cigarette holders.

Madsen's bill seeks to allow other treatment delivery methods such as edibles, tinctures, drinks, vape pens (preferably with an inhaler-type design) and vaporizers. The bill is also ambitious in that it seeks to establish Utah's own medical-marijuana industry. It would not allow for products to be sold in existing pharmacies but would instead rely on the creation of new dispensaries. Dispensary employees would have to be licensed under the Division of Occupational & Professional Licensing, and would be ineligible for employment if they had felony-level drug trafficking or distribution charges on their records. The process for obtaining medical marijuana would require the development of more bureaucracy than Madsen is normally comfortable with.

First, Madsen stresses that no doctor would be required to prescribe something he or she isn't comfortable with. In fact, Madsen's bill requires a strong degree of doctor/patient cooperation and trust. "The criticism is you go in for a hangnail, right, and the doctor is like, 'Oh sure, here you go,' and he just sets himself up to write prescriptions for pot," Madsen says.

But under his bill, only certain specialists would be able to offer the treatment; for example, cancer patients would need a prescription from their oncologist. No family doctor or general practitioner would be allowed to write cannabis scripts.

The patient and the specialist would fill out a joint application that would then be taken to the Utah Department of Health. As long as both the patient and the doctor agree and the appropriate boxes are checked, Madsen says the health department would have "zero discretion" to turn down an application.

The Utah Department of Financial Institutions would then create a kind of ID/payment card. Patients would use it as their ID at dispensaries and also load money onto the card. To avoid violating federal money-laundering laws, the card would not deliver payment to the dispensary but would instead direct payment to the state tax commission, which would collect a fee to administer the program and then send the payment to the dispensary.

The "how" of medical marijuana in Utah may remain moot, however, if Madsen can't sell his colleagues on the "why" of it, and the biggest challenge to overcome is the lack of medical-marijuana research. Madsen calls out the federal government for fumbling marijuana research, because in 1970, the feds decided marijuana had no medical benefit and lumped it as a Schedule 1 controlled substance, in the same category as heroin.

"Why damage the people in their interests and restrict their freedom because government has had a policy in place that didn't provide the answers we otherwise would have?" Madsen asks.