Putting the 'Fun' in Funeral

Despite the morbid name, funeral potatoes are all about joy. 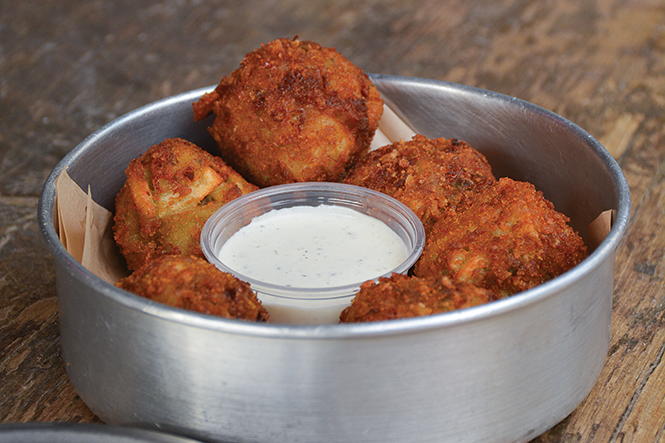 One of the best things about exploring the restaurants in your own back yard is getting the chance to experience cultural diversity through the universal act of chowing down. That said, growing up in homogenous white Utah means I don't have a cultural claim to a lot of the food that I enjoy. As a result, it's rare that I get to pontificate about a dish that was created by the same culture that, in many ways, created me. I'm of course talking about funeral potatoes, a Utah staple made popular by the hospitality of the The Church of Jesus Christ of Latter-day Saints' Relief Society women.

Funeral potatoes got their slightly macabre name from their ubiquitous presence at LDS funerals—the last time I had them homemade was on such an occasion—though they are equally present at other gatherings that commemorate different life-changing events. I've seen funeral potatoes show up at wedding receptions, baby blessings and the welcoming or bon voyage-ing of young LDS missionaries. If you grow up in this community, you come to see tinfoil-topped casserole dishes of piping hot funeral potatoes as a symbol of comfort, outreach and well-wishing. There's just something about the composition of shredded potatoes baked with a mixture of cheddar cheese and cream-based soup finished off with a crispy cornflake crust that has the power to offer reprieve from staring a life-changing event in the face for too long.

If you were to ask me what gives it this power, it's definitely the shit-ton of dairy involved. In addition to heaps of shredded cheddar cheese, you're typically looking at a can of cream of chicken soup, a few cups of sour cream and lots of butter. There are some recipes that skimp on these crucial components because it's healthy, but you just don't get a product that makes you pause to reflect on the moment in the midst of some kind of personal upheaval if you cut corners like that. Some people swear by adding a crust of potato chips instead of cornflakes, but this is also a great sin of omission—it's cornflakes or bust.

Over the past week, I've visited some of Salt Lake's most notable purveyors of this Utah staple, a few of which were new to me—thanks, Reddit! It's not too difficult to whip up a batch of this local comfort food on your own, but I've found that getting the most out of funeral potatoes requires someone else to make them for you.

I kicked off this trek with Meier's Country Fried Chicken (4708 S. Holladay Blvd., 801-272-2491). It's a local haunt that serves as a storefront for a catering service, but they've been a Holladay fixture for years. Their funeral potatoes come as a side dish to plates of crispy fried chicken, and you can get a good-sized portion for $3.99. I'd recommend these for the homemade purist because they're exactly what you'd get if you showed up for any Mormon potluck—no more, no less. The heavy-handed onion flavor will hit funeral potato aficionados right in the heart.

For a traditional preparation that has been elevated with some culinary chops, the funeral potatoes at Wasatch Brewery Pub (2110 S. Highland Drive, 801-783-1127, wasatchbeers.com) are tough to beat. You can only get these as side dishes during the brewery's weekend brunch service from 10 a.m. to 3 p.m., which adds to their cheesy mystique. These tone down the onion flavor in favor of creamy cheddar cheese, and they've cooked their potatoes until they're only slightly tender. If you grew up with funeral potatoes but maintain a refined palate, these go great with the steak and eggs ($12).

Traditional preparation is all good and well, but you gotta love a place that takes a classic and twists it into something unique. The burger meisters at Fat Jack's Burger Emporium (206 S. West Temple, 801-890-5155, fatjacksut.com) have appropriated the dish for their Mormon Burger ($9.29), which is a slice of pub food gold. They prep a traditional bacon cheeseburger with some grilled onions and pepper jack, but then they add an extra patty of housemade funeral potatoes to the mix. All of the burgers at Fat Jack's arrive photo ready with their copper-top buns and near-perfect architecture, but adding a gooey slab of funeral potatoes to a burger is a special kind of beauty.

The true loose cannon of the funeral potato zeitgeist, however, is Garage on Beck (1199 Beck St., 801-521-3904, garageonbeck.com). This purveyor of gleefully unapologetic comfort food has taken the classic funeral potato recipe and created something transcendent. Theirs (pictured) are mixed with bacon and jalapeños and battered in a cornflake crumble before being deep fried—or baptized, according to their menu. When they're done, you get a bowl full of golden gastropub glory that even comes with a side of ranch dressing for dipping.

Regardless of whether you're a funeral potato purist or not, it's nice to know there are a few local joints that have embraced this truly Utah staple—especially since no one has to die for you to get 'em.