AT A GLANCE
Open: Monday-Saturday, 11 a.m.-8 p.m.
Best bet: Bibimbap is lunchtime gold
Can't miss: Tteokbokki will get us through the winter 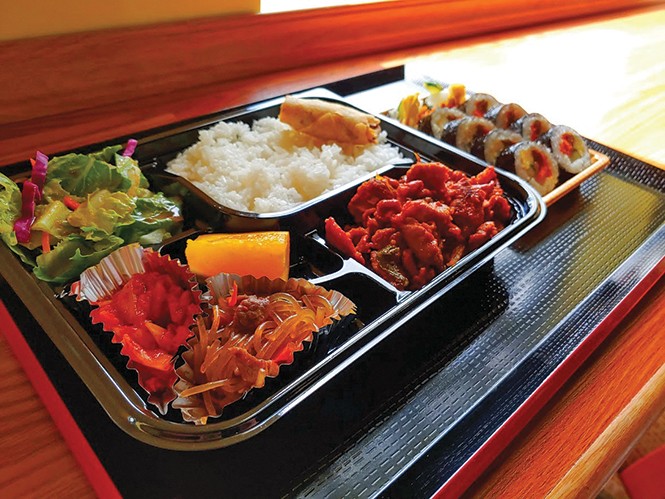 Even though there are still a few more months left for some culinary trend to catch on, I think it's safe to declare 2019 as the year of the Korean restaurant. As I've been driving around town or scoping out the web for new places, the number of Korean places that have popped up has been staggering. Any time you get a proliferation of one trend or regional food, however, it can be difficult for each restaurant to set itself apart. For some reason—my guess is it's the magic ratio of versatility and tradition—Korean places like South Salt Lake's Stun Cube (2732 S. State, 801-419-0082, facebook.com/stuncube) manage to offer a singular dining experience.

Stun Cube—Stun, as in you look stunning this evening, and Cube as in the cuboid trays the food is served on—opened in May with a small menu filled with Korean favorites. Its location adds a nice culinary variety to this State Street area, and I love what they've done with the place. For one, you can buy kimchi and other traditional condiments from a refrigerator next to the cash register. I'm a bit of a sucker for nuances like that—I find the idea of trying some kimchi and pickled daikon, and being able to buy some to take home with me, extremely charming. If little touches like that don't quite have the same effect on you, then the infectious enthusiasm of the staff certainly will. Each time I visited, I was greeted with warm smiles, fast service and personable conversation.

The menu is decidedly trim, which makes it easy to try everything in a few visits. Fans of Korean food will recognize staples like bulgogi ($9.99), bibimbap ($9.99) and the lesser-known favorite tteokbokki ($9.99)—pronounced toke-bokey—all of which are worth your time. My favorite version of bulgogi was the spicy pork. The food here comes out with an extremely clean presentation—the cubes within each serving tray do a nice job of keeping everything separate and tidy. Although I do miss getting my condiments in several tiny dipping cups, each dish comes with kimchi and japchae noodles in crinkly golden pouches like fancy chocolates, which is charming in its own way. On its own, Stun Cube's brand of kimchi hits that perfect balance of crisp, clean flavor followed by a kick of heat in the back of the throat. It's guaranteed to turn up the heat wherever it's applied, so combining a pinch of kimchi with a few slices of spicy, gochujang-slathered pork is ideal for those who like things hot.

I've grown to see bibimbap as one of those dishes that is ideal for a midday lunch. It's warm, healthy and filling without making you feel sluggish—everything that you need to get you through the last stretch of the workday can be found in a bowl of bibimbap. Stun Cube's bibimbap isn't necessarily bringing anything new to the table, but it's a solid interpretation of this miracle bowl. Cutting into the fried egg on top coats the rice, meat and veggies with velvety yolk, and adding a few shots of gochujang to the mix gets the taste buds up and running.

If you're looking for something slightly less conventional, your two best bets are the tteokbokki and the kimchi fried rice. The former takes an angry red brew of gochujang broth and tosses it with chewy rice cakes, thinly-sliced fish cakes and a hard-boiled egg. It's a fascinating dish for many reasons, but the most interesting aspect is the culinary DNA it shares with chicken and dumpling soup. In this case, your dumplings are the pleasantly chewy rice cakes, your chicken is a pressed fish cake and your broth packs a bit more of a punch. I have a feeling a steady supply will be just what I need to get me through the winter. The kimchi fried rice is a delightfully bizarre blend of fried rice, kimchi, Spam and a fried egg. I know it's not exactly en vogue to extol the virtues of Spam, but holy hell if this isn't a perfect breakfast dish. There are few things more beautiful than starting the morning with some warm rice that has soaked up a silky yellow egg yolk, but you throw some kick-me-in-the-teeth kimchi and some salty bites of Spam and you've got yourself a breakfast of champions.

Stun Cube's menu is definitely sticking to the Korean food playbook, but they've created enough small variations—both gastronomically and aesthetically—to make themselves interesting. With winter fast approaching, it's good to have another place to load up on spicy food that will stick to your bones and go easy on your waistline.