A women-only shelter might be insufficient to address needs of sex workers and the crime that often accompanies them. 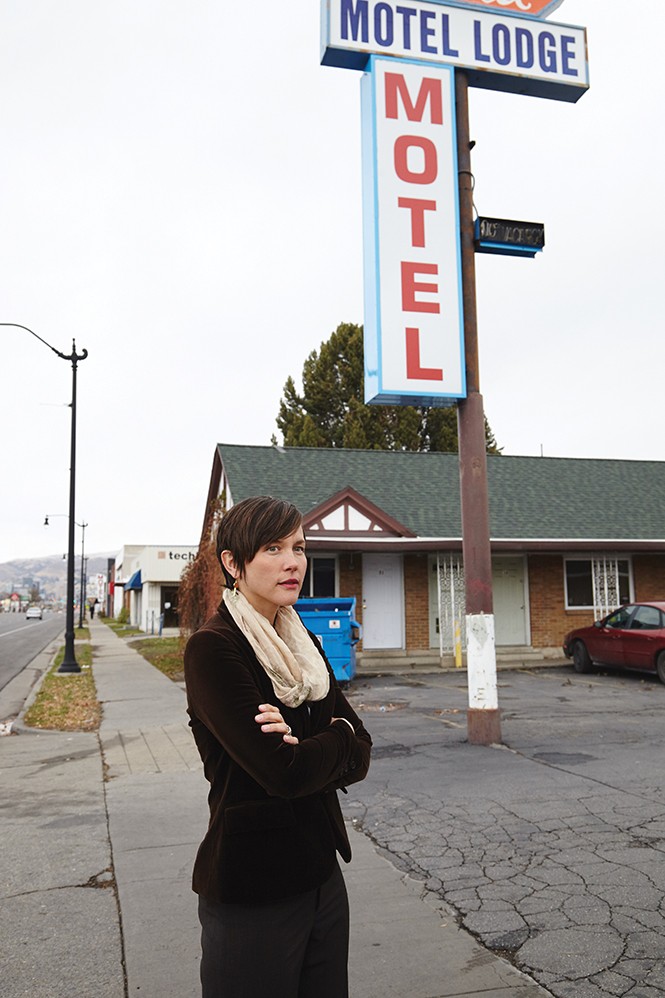 On State Street from 900 South to 2100 South in downtown Salt Lake City, along with blocks on North Temple, approximately 160 women live off commercial sex work. They are the most intractable end of the homeless conundrums that face the city and one that councilwoman Erin Mendenhall feels the time is right to address. That's because with Salt Lake City committed to building four new shelters, including one specifically for women, she spies an opportunity to try to tackle the needs of these two key thoroughfares (only State Street is in her district), which both harbor high levels of crime.

It's a sub-population of Salt Lake's homeless that has long been invisible. They survive in dilapidated motels, relying primarily on heroin to get them through lives already heavy with trauma and abuse histories. Sex work pays for dope and night-by-night rent for a room that costs cumulatively between $1,200-$1,500 a month. That each night they earn enough to get a room renders them housed, as far as federal regulations are concerned, despite the vicious circle they endure to stay there.

As Mendenhall has tried to address the levels of crime that constituents have complained about in neighborhoods on and around State Street, she's come to understand the complex challenges facing those who try to help women dealing with not only trauma histories and PTSD, but also abscesses from injecting drugs, violence, addiction, STIs and, in a minority of cases, mental illness.

Mendenhall says she's tired of accepting the political "status quo" that has kept State Street's disturbing realities swept under the rug for so long. "I think we have some opportunities to do some significant change, without saying we're just going to bulldoze it and they all move somewhere else." She believes that the proposed redevelopment of State Street through the Redevelopment Agency of Salt Lake City and future homeless resource centers are both tools that could address some of the needs she's encountered.

She initially hoped that the women-only shelter now being planned as one of the four new shelters might be the resource for street walkers, but the more she has dug into the topic, the more she realized that beyond emergency shelter, long-term services that are trauma-informed need to be provided for this population in a stand-alone facility.

That was apparent when she met with street sex workers through Asian Association of Utah's trafficking victim case manager Gina Salazar. They told her that they felt a shelter for them should be run only by women, and that it was critical to include mentoring staff who were survivors themselves. Street sex workers typically view The Road Home as unsafe, and some report being ostracized and, in a few cases, turned away from domestic violence shelters when they've sought help. Some of the women hoped such a facility would provide them with the opportunity to work there as staff, so they could learn new skills while earning their keep.

City Weekly asked Mendenhall to talk to a veteran of the street sex-work scene and 30-year heroin addict Donna Steele, who has lived at Palmer Court for the past two years. Steele wants to leave the low-income apartment complex run by The Road Home, in part because of its rampant cockroach problem. "I won't walk State without heroin in my system," Steele told Mendenhall. "I don't get high off it. It's so I can get out of bed and manage my day."

Steele told the councilwoman the biggest issue facing women such as her is being housed in the very area where they had "tricked" and used drugs for so long. "Until you get me out of this area, I'm not going to quit. You can't expect me to," she said. "I don't think any of us has what it takes to get off heroin without being away from this area, our friends. It's a comfort for us. I need to be away from this in order for me to try. I don't stand a chance here."

Steele agreed that a women-only shelter would be unlikely to meet their highly complex needs. "Why don't you just build one for sex workers only?" she asked. Sex workers could work there. "That could be their first job," Steele told her, "and if they get caught out on State [doing sex work], they couldn't work there."

Mendenhall said that was harsh. "You have to be harsh," Steele replied. "Otherwise you have drugs and prostitution going on there."

While there are medical services available, there is no "cohesive service for that population," Volunteers of America Utah's (VOAU) street outreach veteran Ed Snoddy says. "Any time I've had any success is when they've been very victimized, when another trauma trumped their sexual abuse. That's when you have a short period of time to grab them," and ask, he continues, "Do you want to change?" But even then, where can he put them?

"We really don't have the services they need," VOAU's Director of Homeless Services Rob Wesemann says.

"To me the sex workers is such a silent population," Snoddy says. They seldom appear in court for soliciting, and because they are so adept at surviving, they keep under the radar.

SLCPD's head of the Organized Crime unit, Sgt. Mike Burbank, says housing "only solves a small part of the equation. It relieves them of having to pay $50 a night. Beyond that, what's it doing to get them out of the lifestyle? The bigger problem is dealing with abuse and trauma from the past."

Burbank agrees with Steele that location is key. "If we don't remove them from the problem in a large way, we're not helping." He says that moving the sex workers away from State Street, Main Street and North Temple, "would have a dramatic impact on the crime. Removing prostitution, that would remove the drug dealers preying on these girls, it removes the johns who may or may not be future problems."

Asian Association's Salazar, a former sex worker, isn't so sure. "Some parts of me would say 'yes,'" she says. "Most of me says, 'Let's do something positive where we've done really negative things.' The feeling of that is much more fulfilling. So I don't think completely ripping them out of that area" is the answer. But, like Burbank, she says helping the women change will benefit State and North Temple. "The guys, the drug dealers, if there are positive things going on instead of negative, they're going to leave."

Mendenhall told Steele "the time is now," to provide low-income housing with long-term support and options for trafficking victims and sex workers. "What I want to achieve is going to need a separate facility," she acknowledges, that would probably only be built with private funding. Unlike, say, VOAU's $6-million, 24-hour homeless youth resource center, "the culture around helping sex workers is a harder sell."

There are numerous models that Salt Lake City could draw on to provide refuge and services for sex workers, including the Salvation Army's Deborah's Gate in Canada, which houses 150 survivors and provides wrap-around services, and Episcopal priest Becca Stevens' Thistle Farms, where former sex workers stay in free housing for two years, support each other and make candles to earn money. "They earn their money, they police themselves, they support each other and they have to have boundaries," Snoddy says.

Wesemann is excited that there's political interest in trying to grapple with some of the issues that surround many of the women living in State and North Temple's motels. With both politicians and law enforcement looking at the issues behind sex work, he argues that the community "can start to see a clear picture of what our clients need to actually get out of this cycle."