Life for no-tell motels is about to get tougher. 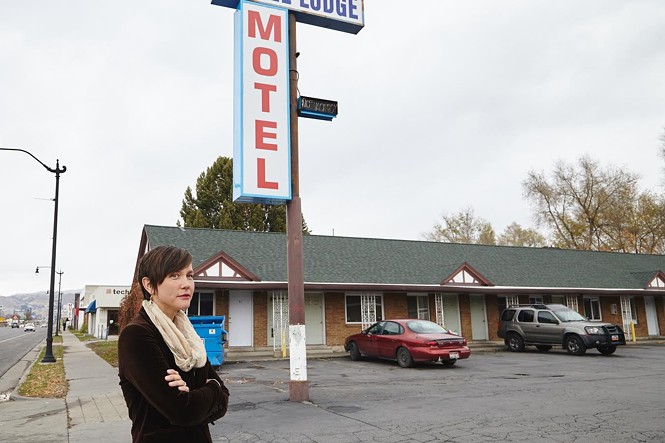 Councilwoman Erin Mendenhall's plans to revitalize State Street took a significant step on Tuesday night. That's when the Salt Lake City Council passed a civil penalties ordinance that gives some teeth to cracking down on businesses that are hotbeds of crime.

While the ordinance covers the bulk of the city, it could tighten the screws on not only rental apartments where landlords tacitly permit crime, but also motels and hotels when owners turn a blind eye to the illegal activities of their guests in Mendenhall's District 5.

In February 2016, City Weekly took a long look at some of the motels well known to law enforcement and women working the "ho trail," as State Street between 900 South and 2100 South has sometimes been called by veterans of that troubling stretch of sidewalk.

Attempts by the police to stop motel owners from renting their rooms out to pimps or women involved in the sex trade, criminals seeking temporary refuge from the law or to those looking to have a short-term base for drug dealing, hit a hard rock in the form of a loophole in the law. That loophole allowed the owners, if facing prosecution, to sell their business to a relative while essentially retaining ownership in what's known as a "straw sale."

Law enforcement historically has struggled to prove in court activities such as sexual encounters being sold at properties where they've sought to go after the owners for essentially playing a passive role in supporting such crime.

"The city hasn't prosecuted nuisance cases in a long time," Mendenhall says. "I was asking us to begin doing that again."

The new ordinance imposes a series of escalating fines—$250 for the first violation, $500 for the second, $500 for the third—plus a six month probation period. A fourth violation would trigger the possibility of the business license on that parcel of land being revoked for six months.  Mendenhall doubts if a business that survives an unplanned closure would risk repeating it.

The initiative is modeled after penalties related to selling alcohol to minor. Another key element, Mendenhall notes, is that as she and the city work on redeveloping State Street, so property values increase. "I want to make it more difficult for them to allow the illegal activity they allow. I wanted to make it less financially lucrative."

Hotel and motel owner Mike Saysan expresses frustration at the news of the new ordinance, after a City Weekly reporter outlined it to him. "I wish I would have had an invitation [to the hearing]," he says. "Nobody told me."

"I am one of the best hotel owners on State Street," he says, citing the investments he made to remodel Zions and his ongoing plans to do the same for the Wasatch Inn, the latter long-viewed as one of several epicenters for sex workers by law enforcement and trafficking victim advocates.  "If I know [tenants] are doing something wrong, if they don't leave I will call the cops," Saysan says.

He points out that it is illegal for him to deny a room to someone who requests one, "as long as they don't cause us problems on our property." Homeless men and women who can gather the money to pay for a room for a night or a week "pay money as much as other people pay," he says. Why should they or he be penalized by the city for providing rooms, he continues.

Mendenhall says the ordinance doesn't target motels that have been constant sources of complaints by her constituents, both residents and businesses, who have suffered from criminal activity spilling out of them. But, the motels and the shifting of ownership "exposed the loophole," she has sought to close. She asks why should the community that surrounds such businesses have to endure problems caused by the kind of clientele that they serve.

"We have to uphold the law somehow," she says, noting that the city's inability to enforce it properly "has illuminated this loophole so clearly. So yes, we are drawing a line in the sand."

Salt Lake City Police Department Det. Greg Wilking has a lengthy familiarity with the problems caused by motels that turn a blind eye to criminal activity in their rooms, having spent some time investigating them and their owners. He welcomes the new ordinance. "I'm not 100 percent sure I understand what it is we would be citing them for, but I like where we're heading," he says. "It has a good, broad capability to disrupt businesses that are causing problems."