When pedestrians feel safer around cars than bicycles, you know attitude policy is shifting gears. 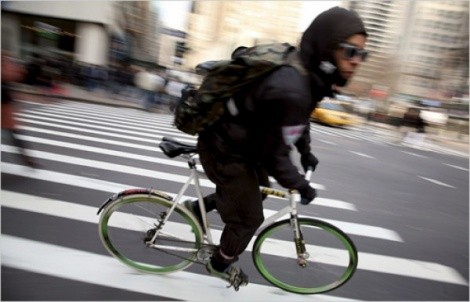 We all have our pet peeves. Among mine are rude bicyclists. Yet another one nearly wiped me out as I was walking to our office yesterday morning. I was in the crosswalk. I had the light. He had the speed gained from pedaling downhill on Main. He clearly had the attitude possessed by the growing number of bicyclists who think it’s their God-given right to be jackasses. I didn’t even see him coming—just as I stepped to the curb, he whizzed by a few inches behind me and never looked back as he sped towards 300 South.

A driver at the crosswalk, honoring his red light, just looked at me and shrugged. It was his car that had blocked the view of the approaching bike-rider, who was riding between it and the sidewalk. We both wore those, “Hey, what can you do about it?” looks. When the light turned green for him, he slowly drove off.

That’s when I wished I had superhero powers. If I did, I would have concentrated really hard and caused the driver to stomp on it to get up to, say, 103 mph. I’d have him rush down Main Street in hot pursuit. The biker would never know he was coming. He wouldn’t run over the biker, wouldn’t even swerve a little to scare him. He’d just keep on going. I’d just know I had superhero powers, and I could use them if I wanted.

As with many cases like this, I defer to some wisdom I gleaned in Greece. I was being driven through Athens a few years ago during a very busy time of day. Athens is overrun by motorbikes. They speed in and out of traffic, drive the wrong way on one-way streets, ride on the sidewalks, and generally inspire any visitor to Athens to book their next vacation to hell instead. As we were driving, several bikes driven by perfectly oblivious males sped within inches of us and continued weaving in and out of traffic until we’d lost sight of them. I looked at the driver, who remained calm, despite the fact that what we’d witnessed was quite harrowing.

Rude Salt Lake Bicyclists Give the Rest a Bad Name

He described how so many of them really do end up dead, and how Greece is among the most dangerous places in all of Europe to drive—thanks, in no small part, to reckless motorbike riders. It’s seldom that a bicycle and a motorcycle can be accused of causing the same mayhem, but I’ve about had it up to here with rude, dangerous and arrogant local bicyclists. They are not the type to be confused with all of you decent, respectful bicyclists reading this who are most certainly not of that stripe. But odds and probability being what they are, it wouldn’t surprise me to learn that the guy who nearly ran me over is smoking his clove cigarette, spindly fingers jutting from those hipster biker half-gloves, sipping a latte, reading this issue of City Weekly and never once considering he’s the jackass I refer to. He’s probably too full of himself to know he has the word jackass furrowed into his grimy forehead.

The guy who sped past me, and many others like him, are indeed, “future dead people.” It’s just a matter of time before their 10-pound bikes rams head-on into a 100-ton TRAX train. And, I know there are people out there angrier than I at bicyclists—and who don’t have complete control over their superhero powers like I do—people who might actually run over bikers on purpose. Such as in the nearly fatal hit-and-run of Marty Kestler in 2007 who, unlike the cyclist who breezed by me, claimed to be abiding by the rules of the road.

I’ve watched bicyclists commit dangerous maneuvers all over downtown. Just ask them—the roads belong to them. They are the new elitists. No one likes elitists. And no one likes elitist pieces of legislation. One such bill is Carol Spackman Moss’ proposal to grant bicylists the privilege in certain cases of riding through stoplights and stop signs. Gee, that sounds fun. Why not UTA buses, too? Imagine the smaller carbon footprint if buses weren’t forced to idle.

I’m not giving autos a hall pass. I was struck by a car while riding a bike myself. On purpose. But there’s a growing sentiment that those bike lanes and all the hyperbole about making our planet a better place if we’d just ride bikes instead of drive is a bunch of hooey. Bicyclists are crapping in their own Easter baskets. When pedestrians feel safer around cars than bicycles, you know attitude policy is shifting gears.