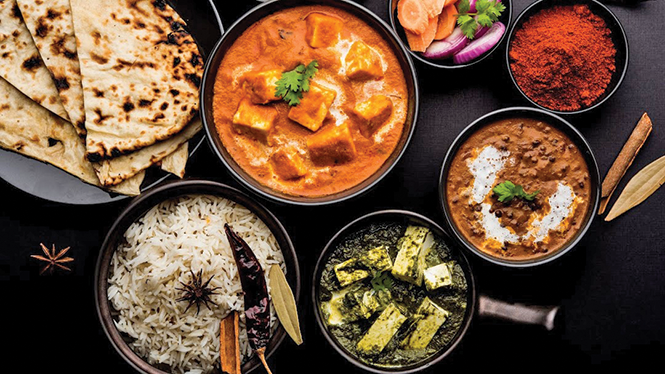 Though traditional Indo-American food lends itself quite nicely to the fast-casual concept, I've struggled to really get behind any local joints that have come and gone. I'm not quite sure what the hang-up has been—I've just never tried a fast-casual Indian place that can party with the players we already have on the scene here in Utah. That said, I'm starting to think that Makam's Indian Restaurant (894 E. 3900 South, Ste. B, 801-905-1921, makamskitchen.com) in Millcreek might change all that.

As a fairly new fixture to the 3900 South and 900 East area of Millcreek—it officially came out of pilot mode at the tail end of January this year—Makam's fits nicely into the same neighborhood that houses an Iceberg and the legendary Salazar's. It's got the same sense of self-made character that many of the businesses in the heart of Millcreek share, which will go a long way to preserve the area's personality in spite of all those cookie-cutter condos going in left and right.

The fast-casual concept of Makam's feels slightly predictable at first—rice bowls with your choice of protein and curry are their current specialty—but there are some hidden gems to be found if you spend some extra time with the menu. The street food section, for example, is fun to explore as it contains several traditional favorites, some of which I'm seeing for the first time. The aloo tikki chaat ($5.99) and the chili paneer ($5.99) were unexpected favorites that I was heretofore unfamiliar with. Both items paint a strong picture of traditional Indian flavors with unexpected bursts of sweet and spicy flavors.

Aloo tikki chaat takes traditional potato and pea patties known as aloo tikki and slathers them in a gravy-like ragada sauce made from cooked peas and a flavorful balance of garam masala, coriander, turmeric and lemon juice. It's smoky and sweet with just a little bit of chili powder heat to it. For something on the unexpectedly spicy side, the chili paneer will provide your taste buds with a nice scorch. Another new-to-me item, the chili paneer is a stir-fry of bell peppers and cubes of Indian cottage cheese known as paneer that have been hit with an angry mix of chili peppers and traditional Indian spices. If you order this, keep one of Makam's mango lassis ($2.99) close by to put out the fire.

If you've never tried the quick snack known as pav, Makam's is a good place to check it out. Their two variations are pav bhaji ($6.99) a comforting stew of veggie and potato curry with rolls for dipping, and vada pav ($4.99), a kind of slider with a fried potato patty instead of a burger. Both dishes are tasty and embody the full-flavored complexity of Makam's larger items, but I think the pav bhaji slightly edges out the vada pav, which had an aggressive citrusy flavor that threw things off balance.

Makam's signature curry bowls have more variation than one would expect at a fast-casual joint, and this is why the place gets a high replay value. The chicken tikka masala bowl ($8.99) meets all expectations of what this dish should be—it's packed with flavor and the slight acidity from the tomato is right where it needs to be. From there, you've actually got a lot of different avenues to explore. All of their bowl options are available as wraps if you feel like pounding some curry while you drive, and their Indo-Chinese options ($8.99-$9.99) served on your choice of fried rice or noodles are just right when you're after something slightly different.

I also have to give Makam's praise for their available proteins—bone-in goat is getting to be less freaky in Utah, and I love that Makam's is part of that movement. Of course, one does not have to be a meat lover to enjoy a visit to Makam's. Most of the menu is accessible to vegetarians without skimping on the signature flavors born from the Indian spice palette.

Overall, Makam's has bridged a difficult gap between traditional Indian restaurants and the fast-casual concept. By keeping their menu diverse and infusing their core dishes with enough options to tempt diners into coming back to try other combinations, they've achieved a steady balance between the friendly neighborhood eatery and the on-trend foodie hot spot. They've got a few minor bugs to work out as most new restaurants do, but I'm confident that Makam's will flourish in its Millcreek digs.