On the front lines of policing crime around the downtown shelter, a cop and a homeless addict repeatedly clash. 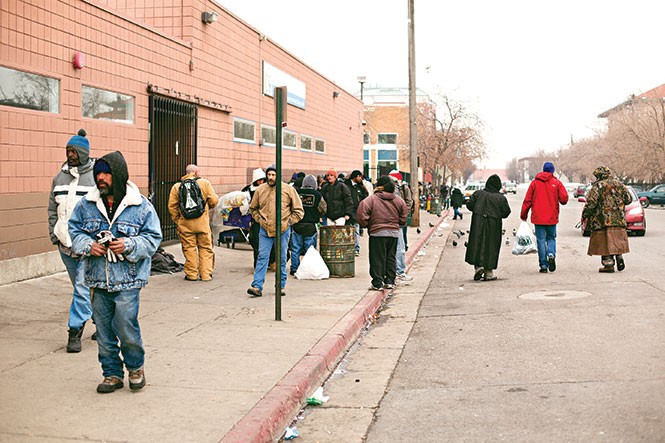 When defense attorney Cara Tangaro asked Salt Lake City police officer Dax Shane on the stand whether he told a prosecutor—while giving him a ride home from 3rd District Court—that Rio Grande shelter-regular Anthony Lane was a police informant, he said yes. He also answered yes when she asked if he realized that being labeled as a "snitch" at the shelter was dangerous.

The exchange took place during Lane's August 2016 trial for aggravated assault. Under Tangaro's questioning, Shane admitted to being frustrated with Lane, whom he had known for many years and with whom he had not seen eye-to-eye, he testified. That frustration led him to lie to Salt Lake County prosecutor Rick Pehrson, claiming he had told someone he found with drug paraphernalia that Lane had informed on them. Shane's intention was that Lane, known as "Country" at the shelter, would be beaten—which he added in the car-conversation had transpired by the next day.

On the stand, Shane claimed it was a fabrication designed to impress his passenger. "It never happened, something I completely made up," he told the court about labeling Lane a snitch.

Whether Shane's conversation with Pehrson was, as SLCPD spokesman Greg Wilking says, an attempt to explain to a non-cop the hypothetical realities of working the drug- and crime-ridden streets around the shelter, or, as Lane's attorney Tangaro says, an accurate statement of his actions, the ripple effect of that casual conversation has yet to abate for Shane or Lane. The saga of Shane and Lane's dance as cop and homeless addict reflects as much on the challenges of policing the shelter as it does on the men's problematic relationship.

A controversial officer with a reputation among some defense attorneys for harassing the homeless, Shane was investigated by Internal Affairs and suspended for two days without pay. He now has to live with the possibility of his future testimony on cases being called into question. Shane declined an interview request.

Police spokesman Wilking says Lane is someone who's known for drugs and fighting. "To me, he is a very active player in the drug trade around the shelter. He knows who has the drugs, he knows where to get drugs, he is very involved in that trade." He describes him as a predator who uses force and intimidation to get what he wants.

Lane went on trial for cutting a gang member's face with a box-cutter. The DA's office introduced two prior assault cases where Lane attempted or successfully wielded a knife or box-cutter against men he claimed were attacking him. In both cases, he claimed self-defense; the first led him to plead guilty on a reduced charge of a misdemeanor of attempted aggravated assault, the second to a jury finding him not guilty on the assault charge. But in this case, he was convicted, and faces up to 15 years in prison at his sentencing on Oct. 14.

Each of the cases in 2012, 2015 and 2016, Lane says in a jailhouse interview, resulted from him having to defend himself after Shane spread the word that he was an informant. In the 2015 case, according to police body-camera footage played in court, a woman outside the shelter shouted at Lane: "You're an informant. Everybody hates your ass."

Lane accuses Shane of lying on a 2014 drug case, where the cop rode up on his motorbike and, according to the probable cause statement, Lane put down a large container of drugs in front of him and walked away. That case was filed in 2014 but did not progress in the court system because a senior officer Lane worked with had it pulled. That drug case was subsequently re-filed by Pehrson when Lane was prosecuted for assault the third time in 2016. The drug case was tossed out because of Shane's off-duty statements to the prosecutor.

Lane is angry when a reporter says Shane got a two-day suspension. "Wow," he says, sitting back on the metal bench on the other side of a Perspex window in B pod. "Two days suspension for endangering a person's life?" 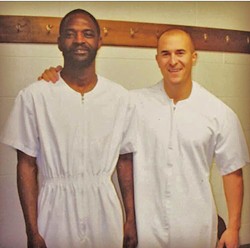 SECOND CHANCES
As the ever-growing list of African-Americans shot dead by police officers across the United States in highly questionable situations continues to be a defining issue in national and local politics, the allegation that a white officer sought street justice against a black man he did not like might well be seen by some to add more fuel to the fire. Tangaro notes the outrage that followed the shooting of a teen outside the shelter in late February 2016. "I think it's particularly disturbing that someone who is a law enforcement officer would go to these lengths to harm someone like Anthony Lane. And I have no doubt that he actually did it," she says. "I don't believe for one second that it's a made-up story."

In part, the conflict between Lane and Shane stems from different approaches to policing the burgeoning homeless and criminal elements that surround the shelter, sometimes, as with Lane, the line blurring between the two.

Lane says Shane was critical of several officers who befriended him. Former SLCPD Officer Eric R. Moutsos rescued him from the shelter in 2008, shortly after the Alabama-born Lane arrived in Salt Lake City. While patrolling Liberty Park and the shelter, Moutsos says he came to know Lane as a man of immense talent and one he came to love and respect. Moutsos worked part-time jobs to give money to Lane and, after consultation with his former LDS bishop, picked Lane up in his mini-van and tried to get him help.

Moutsos baptized Lane, at the latter's request, into the LDS faith, but Lane backslid into drug use and decided to leave the church rather than blemish it with his addiction. "They were so generous to me. But the addict side of me was not being treated." Moutsos, he says, "was ahead of his time. He looked at me like one of his brothers. Now we've got an officer going around doing the opposite."

Moutsos sells solar panels now. He won't comment on Shane, except to say, "He and I have completely different styles of policing; I believe in second chances and helping people."

Wilking characterizes Shane's approach as seeking to disrupt drug-dealing activity. "He knows the only way he can stop people from using is to arrest them." Shane would advise addicts near the shelter that sooner or later they would get caught, jailed and hopefully get sober. "If I had a 100 officers like Dax that are working hard and telling people this, the drug dealers would know that's not a place to do business," Wilking says.

Perceptions of Shane can be markedly different.

Defense attorney Skye Lazaro represented Lane with Tangaro. For four years until spring 2016, she was a public defender at Salt Lake Legal Defenders.

She recalls cases at LDA involving Shane that were "homeless people crimes," such as misdemeanors for criminal trespass, standing on the sidewalk waiting for the shelter to open, or sleeping in the park. Shane would pick them up on such misdemeanors and they would sit in jail for several days unable to make bail, waiting to appear before Judge John Baxter at his homeless court near the shelter.

Wilking says the perception that Shane harasses the homeless is incorrect. "It's not the homeless so much as it's the criminal element. He doesn't want to see these people that are preying on others continue to carry out that activity."

Monte Hanks is a veteran client services director at the nonprofit Fourth Street Clinic, which provides extensive services for the downtown homeless. He has known Shane both professionally and personally for years. "I've been very happy with what he's done regarding the homeless," he says. "I'd have a hard time buying into him doing something like that," namely labeling someone an informant. 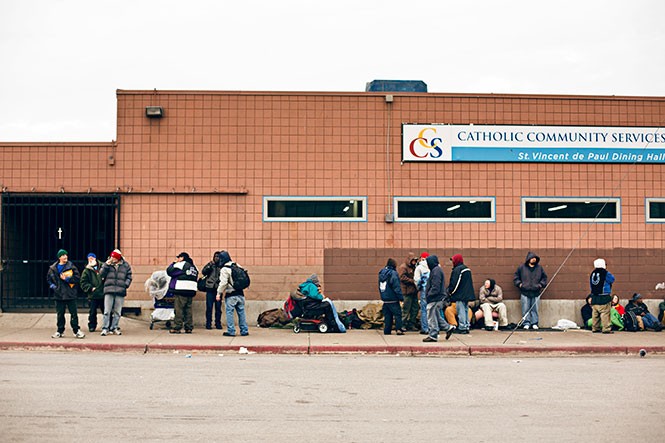 IN HARM'S WAY
SLCPD spokesman Wilking says Shane told Pehrson shortly after the fateful ride home that he had made up labeling Lane as a snitch. Pehrson informed his superiors at the district attorney's office and was conflicted off the case. He also informed SLCPD's Internal Affairs.

Shane told IA that Pehrson was correct and, according to a discipline letter by Chief Mike Brown, that he was embarrassed by what he had done and did not know why he had done it. Four months later, the DA's office told Tangaro that Shane had fabricated what would be described in court as a "fishing tale" in a moment of stupidity.

In late August 2016, Chief Brown suspended Shane without pay for 20 hours for conduct unbecoming. While Shane's union rep told IA that Shane's actions were a "bonehead thing to do," he argued it would not impact Shane being able to testify in court. Brown disagreed. In his letter, he noted that Shane's actions had meant the DA had to dismiss the drug case against Lane where Shane was the arresting officer.

In total, according to a record request by City Weekly, in Shane's 14 years at Salt Lake City Police Department, he's been disciplined eight times, dating back to February 2005. The incidents ranged from accidental car damage and poor driving to an improper search and, in 2015, an inappropriate use of force.

Brown noted in his letter that whether Shane had branded Lane an informant or made up the story in a moment of boastful bravado, "the implication is the same in that your truthfulness remains in question." He wrote that it appeared Shane hadn't falsely identified Lane as an informant, but that "your remarks nevertheless were inappropriate, unacceptable and indicative of extremely poor judgment and a lack of professionalism and respect."

Shane requested and got a transfer to the east side. "He doesn't want any part of [the shelter] anymore," Wilking says. The amount of criminal activity there "puts you in harm's way and under a microscope more often."

But while he can walk away from the shelter, he can't walk away so easily from his "fishing tale." Brady/Giglio are legal precedents that require the prosecution discloses to the defense information about officers that could impact their credibility. District Attorney Sim Gill says Shane "admitted in open court he lied to a prosecutor and that's going to raise a Brady/Giglio issue always."

Even if Shane's assertion that his story was fabricated is true, Tangaro says her concerns remain the same. "What level of integrity do we expect from law enforcement officers and if they are going to go down to that level, are they really someone we want wearing a badge and carrying a gun?"