AT A GLANCE
Open: Mon.-Sat., 11 a.m.-9 p.m.
Can't miss: The jjamppong will steal your heart
Best bet: The jajangmyeon is textbook comfort food 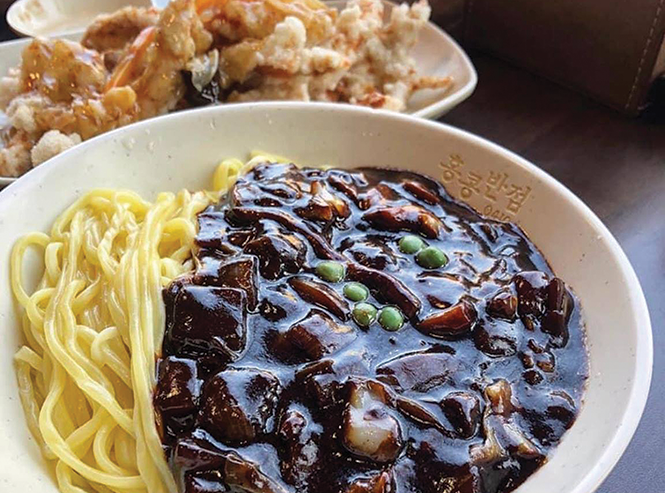 You can't beat downtown Salt Lake and Park City for on-trend culinary innovation, but if a bit of no-frills gastronomic adventure is what you're craving, West Valley has you covered. There is a convergence of cultural and entrepreneurial punk rock happening with the WVC restaurant scene, and it's perfect for diners on the lookout for something exciting. West Valley's climate of culinary diversity most definitely paved the way for Utah's first Hong Kong Ban Jum (3513 S. Constitution Boulevard, Ste. 100, 385-900-8607, facebook.com/Hong-Kong-ban-jum-Utah) location, which feels like a big victory for spreading the gospel of Korean food.

Hong Kong Ban Jum is part of an international franchise operated by Chef Jong Won Paik, a popular culinary personality in South Korea. Chef Paik uses his international platform to further globalize Korean food while his company, The Born Korea, helps small business owners operate their individual franchises. While Hong Kong Ban Jum gained its U.S. foothold in Southern California, offshoots of the franchise have been popping up in flyover country. Utah has seen a recent spike in Korean restaurants lately, and Hong Kong Ban Jum further refines the type of Korean food available locally; bulgogi and kimchi are nowhere to be found on their menu.

Instead of serving up the traditional staples of American Korean joints—delicious though they are—Hong Kong Ban Jum is all about Korean/Chinese fusion. Much like the Americanized Chinese food that immigrant restaurateurs built their foundations upon, Korean Chinese food blends traditional Chinese dishes with distinctly Korean flavors flavors to create something that borrows from both cultures. Scrolling through menu photos of jajangmyeon ($7.99), a dish of glossy black bean sauce slathered of thick ramen noodles, and jjamppong ($9.75), a spicy seafood soup with mussels and squid, made me realize there was something missing in my life. I hadn't seen any of this stuff available locally before, so I had to have it.

As I pulled up to its nondescript location for my takeout order within the retail labyrinth adjacent to Valley Fair Mall, I started to get butterflies. It's a feeling that I'm sure is familiar to the online dating crowd: You like what you see online, but will the goods deliver? I was greeted with friendly service, and my order was ready to roll. When you order takeout here, they don't just glop everything into a plastic bowl where it degrades into a sorrowful morass on the drive home. Your noodles are separate from your sauces, so you can mix the two at your convenience, which is both fun and considerate.

After I got everything home and assembled, I started with the jajangmyeon, which hits all the comfort food notes. The noodles are perfectly cooked, with an excellent balance between softness and chewiness. Once you coat them with that beautiful black bean sauce, the two components combine for a salty-sweet flavor balanced with the starchy goodness of the fresh noodles. It's the kind of meal that is perfect for combating the midday slump—homey flavors that aren't overly flashy, but satisfying enough to brighten your spirits for the remainder of the day.

The jjamppong, on the other hand, is a fiery crimson noodle soup packed with seafood and veggies. It's spicy enough to give the diner a wake-up call, but those after something a bit more aggressive will want to try the gochu jjamppong ($9.99), which spikes the dish with a pile of sliced chili peppers.

Though the menu shows little similarity to the American take on Chinese food—no complaints here—the tangsuyuk ($11.95) and the gunmandu ($7.99) are slightly more familiar. Tangsuyuk consists of crispy fried pork slices and a sweet, thickened sauce full of veggies. The sweet sauce poured on top of deep-fried meat hearkens back to the sweet and sour pork that is ubiquitous on Chinese food menus throughout the country. The gunmandu are Hong Kong Ban Jum's take on fried dumplings, and their flavors are quite similar despite their gnocchi-like shape. I've had plenty of dumplings stuffed with an unseasoned mixture, but these have a nice flavor and texture to them; I'm a fan of dipping these in the sauce from the tangsuyuk for some extra sweetness.

It's always exciting when new types of food come to the neighborhood, and I can't help but think that Utah diners have played a part with this diversification. I've been seeing Korean food particularly start catching on, which means that our dining community is starting to become more accepting of food they may not be familiar with, and I love that. Again, there's always a bit more we can do to support places that are bringing something unfamiliar to the table, but the best way to make sure we keep getting places like Hong Kong Ban Jum is to get out there and explore.