The rest of everything you should revisit, or discover, from last year 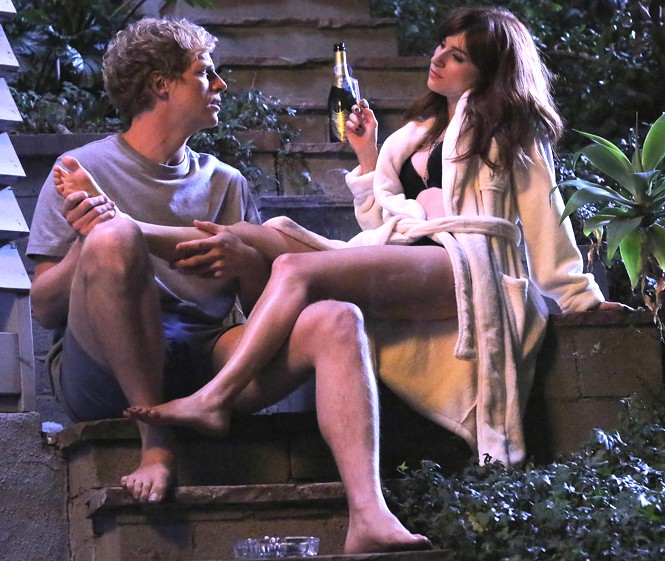 You're the Worst (FX) Like the equally surprising Broad City, You're the Worst shattered preconceptions of the "edgy" cable comedy with smarts, heart, bracing moments of relationship realism (and outright debauchery), and a fearless cast led by relative unknowns Chris Geere and Aya Cash. No worries that the Toxic Twosome and gang are moving to FXX this year ... right?

The Bridge (FX) Apparently, FX can only sustain so many quality dramas: The Bridge was canceled after a low Season 2 turnout, and those who did show up were treated to a Tex-Mex stew that was a little overcooked—and it was still better than most crime dramas.

The Strain (FX) Guillermo Del Toro and Chuck Hogan's vampires-bent-on-world-domination tale transitioned from novel to TV series with only a few bumps and a whole lotta scares (not counting Corey Stoll's hairpiece) and reclaimed bloodsuckers from the glam universes of Twilight and True Blood.

Ray Donovan (Showtime) His sketchy character's name is the title, and star Liev Schreiber did his damndest to take the show back from father figure Jon Voight in Season 2, mostly succeeding while taking on a twisted new FBI antagonist (Hank Azaria, killing it).

Masters of Sex (Showtime) There's no power couple on television as compelling and confounding as Dr. William Masters (Michael Sheen) and Virginia Johnson (Lizzy Caplan), and they're barely "together," in any sense. Was anything easy in the '50s? Besides Virginia? (Rimshot.)

Welcome to Sweden (NBC) This Swedish import turned up on NBC's summer schedule seemingly by accident, a subdued and charmingly awkward comedy that should have no place on an American network—and yet it worked fantastically. Watch for Welcome to Sweden when it "accidentally" comes around again.

Garfunkel & Oates (IFC) Musical-comedy duo Riki Lindhome and Kate Micucci are no Flight of the Conchords—they're better, at least when it comes to song quantity and absence of indecipherable New Zealand accents. For Garfunkel & Oates, TMI means both Too Much Information and Touching Musical Interludes.

Outlander (Starz) Starz finally acknowledged that women watch TV—and then told them they'd have to wait six months for the second half of their new favorite Scottish bodice-ripper. Spartacus never would have stood for this.

The Knick (Cinemax) In yet another instance of indie-film directors realizing that television is where it's at, Steven Soderbergh directed this 10-part oddity about a doped-up doc (Clive Owen) at the precipice of modern medicine—he's House 1900, with a premium-cable license to shock.

Doctor Who (BBC America) Peter Capaldi. That is all.

Bojack Horseman (Netflix) A former sitcom star man-horse (voiced by Will Arnett) and his slacker roommate/squatter (Aaron Paul) get turnt up and knocked down in Hollywood. It's Californication: The Cartoon.

Sons of Anarchy (FX) The seventh and final season of Hamlet on Harleys was overwrought, overindulgent and over-the-top—and you expected, what? For all his faults, showrunner Kurt Sutter is still a passionate storyteller, and the finale of Sons of Anarchy was a fittingly chaotic closer that tied up (almost) all of the loose ends. Time to retire the patch, and the musical montage.

Brooklyn Nine-Nine (Fox) It's not the Andy Samberg Show; it's one of the best ensemble comedies on TV, something Fox is nailing better than anyone these days. Witness ...

New Girl (Fox) By no logic should New Girl be this good in Season 4, but Zooey Deschanel and crew have become a fuzzy juggernaut of funny that still manages to surprise every week, putting one-note sitcoms like The Big Bang Theory and, well, every other half-hour on CBS, to shame.

The Blacklist (NBC) James Spader's "Red" Reddington is one of the best villain-heroes (villo?) ever, and Season 2 of The Blacklist has found his FBI foil Lizzy (Megan Boone, finally free of the wig) stepping up her game, if not her crazy. And kudos for selling Pee-Wee Herman(!) as an underworld "fixer."

Marvel's Agents of S.H.I.E.L.D. (ABC) Season 2 has introduced real danger and consequences for the Agents, as well as Marvel-flick-worthy action and effects—stop asking "When's Iron Man gonna show up?" and just get onboard, already.

The Flash (The CW) The sunny answer to Arrow (seriously—is it never daytime over there?) is the most comic-booky of all DC Comics adaptations, and the most fun.

Jane the Virgin (The CW) Usually, "Golden-Globe-nominated" means nothing—but Jane the Virgin is the first CW show to ever score a nom! That's also the first time I've ever used the term "nom." Firsts all around, here.

The Walking Dead (AMC) Team Rick is on the road, finding new places to explore and more people (zombie or not) to kill—less talk and more rock makes for a more entertaining apocalypse; hopefully, they won't slow down when Season 5 resumes in February 2015.

American Horror Story: Freak Show (FX) The best elements of three previous seasons came together on No. 4, Freak Show, along with more gorgeous cinematography, more sympathetic characters and more Jessica Lange than expected. The early loss of Twisty the Clown seemed like a misstep, but the rest of this season has been perfect.

Benched (USA) With no hype besides airing after the craptastic Chrisley Knows Best, new comedy Benched, about a former corporate attorney (Happy Endings' Eliza Coupe) slumming it in the public defender's office, managed to crank out 12 hilarious episodes this winter and no one even noticed.

The Birthday Boys (IFC) The sketch-comedy troupe relied more on themselves than producer Bob Odenkirk (who was presumably busy making Better Call Saul) in Season 2; the result was a hysterical collection of bits with callbacks and intertwining gags galore (fast-food spoof "How Do You Freshy?" is an instant classic). It ain't Mr. Show, but it's as close as anyone's come in years.

The Comeback (HBO) The first season nine years ago was merely uncomfortable; The Comeback's out-of-the-blue comeback was borderline torturous—in the funniest possible way. Lisa Kudrow's depiction of fame-junkie desperation is so masterful, you have to wonder why anybody's even paying attention to Jennifer Aniston.

Girlfriends' Guide to Divorce (Bravo) Bravo's first foray into (overtly) scripted programming is not only not terrible, it's actually pretty great. How the hell did this happen?

Mike Tyson Mysteries (Adult Swim) Whatever drugs were responsible for the creation of this ... thank you.