(Almost) everything you should revisit, or discover, from the past year 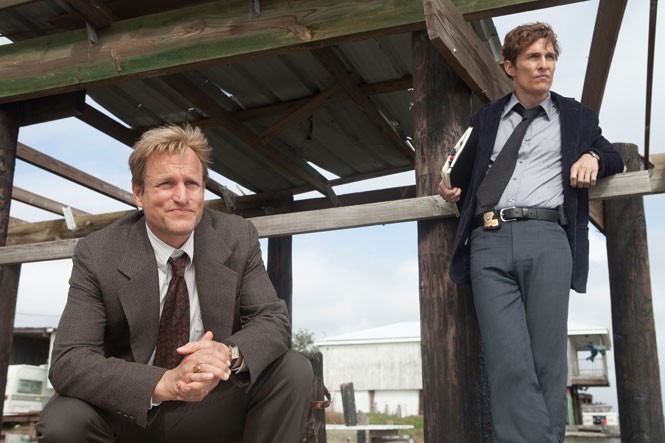 Banshee (Cinemax) This left-field, visceral mashup of Justified, Twin Peaks and Fight Club went pulp-gonzo harder in Season 2, expanding the world of Banshee, Penn., just enough to introduce even more Amish mobster/Ukrainian thug mayhem. It's that weird, and that cool.

Shameless (Showtime) Things somehow got worse as they got better for the Gallagher clan in Season 4, with William H. Macy and Emmy Rossum delivering alternately heartbreaking and hilarious performances. This is America's family.

Justified (FX) Star Timothy Olyphant put his boot down and rescued Justified from becoming entirely Boyd's (Walton Goggins) show in its fifth and penultimate season, and brought some new colorful characters along for the ride.

Broad City (Comedy Central) Few comedies arrive as fully realized as Abbi Jacobson and Ilana Glazer's Broad City (though it did have a head start as a web series); their broke Brooklynites are the female flipside of Workaholics, only smarter, funnier and occasionally grosser.

Helix (Syfy) Ronald D. Moore's (Battlestar Galactica) arctic Andromeda Strain/Walking Dead hybrid crept up with no big splash, but it did earn a second season for 2015—catch up on Netflix now.

The Americans (FX) Keri Russell and Matthew Rhys continued to out-spy Homeland while still stuck in Cold War 1981, facing down more danger (and wigs) than Carrie and Brody could ever imagine.

House of Cards (Netflix) Vice president Frank Underwood (Kevin Spacey) delivered a shocking twist in the first episode of Season 2, and the train didn't stop a-rollin' from there. As with actual D.C. politics, it's best not to think too hard about the machinations en route to the presidency.

Fargo (FX) Lorne (Billy Bob Thornton), Lester (Martin Freeman) and Deputy Molly (Allison Tolman) shut down the "You can't touch that movie" doubters from frame one with this dark, funny adaptation that faltered even fewer times than True Detective. Oh, you bet'cha.

From Dusk Till Dawn (El Rey) Another film-to-TV transition that defied the haters, From Dusk Till Dawn expanded the 1996 cult classic into an even crazier, racier 10-episode ride where the definition of "the good guys" is subjective.

Silicon Valley (HBO) Mike Judge finally, if not intentionally, created the sequel to his Office Space with Silicon Valley, a hysterically profane (and tech-jargoned, at least at first) saga about programmers in waaay over their heads. If only Halt & Catch Fire had been half this much fun.

Veep (HBO) Speaking of profane: VP Selina Meyer (Julia Louis-Dreyfus) and her team continued to fail upward in Season 3, from WTF? to the brink of POTUS. Pray for your country.

Bates Motel (A&E) Murder, drugs, love triangles, commercial zoning disputes—Bates Motel has it all! Norman (Freddie Highmore) became as intriguing as mother Norma (Vera Farmiga) in Season 2, no small feat, as did some of the supporting players. Why wait for Showtime's Twin Peaks revival? It's already here.

Mad Men (AMC) Splitting the final season in half was a lousy idea (the Mad Men buzz is pretty much nil at this point), but those first seven episodes provided a course-correcting jolt that should make for a hell of a 2015 finale, whenever that happens (hopefully, not in the '70s).

Last Week With John Oliver (HBO) Sure, it's a Daily Show knockoff with F-bombs—but those rants! Corporations, media, condiments—suck it! Everything the overblown Newsroom attempted over three seasons, Oliver nailed in 30 minutes.

Legit (FXX) Poor Jim Jefferies. His Louie-like Legit finally got good by the end of its first season, then FX exiled it to the untested FXX for Season 2: No promotion, no viewers, just yelling into a vast, empty room. See what you missed on Netflix (along with Jefferies' stand-up specials).

Playing House (USA) Jessica St. Clair and Lennon Parham as almost-uncomfortably close BFFs failed on network TV, but found a niche on cable with Playing House, which could be the first series ever to make pregnancy play funny and inclusive.

Parks & Recreation (NBC) While excellent as ever, Season 6 probably should have been the last (maybe even halfway through), but at least we'll get a proper sendoff for NBC's last great Must-See comedy in 2015.

Rick & Morty (Adult Swim) Few "get" Community, but Dan Harmon's other TV project, the animated, simultaneously brainy and crude Rick & Morty—imagine Back to the Future with more universes, booze and malicious aliens—clicked immediately on Adult Swim.

Louie (FX) Louis C.K. made us wait two years for a new season, then delivered 14 arty-if-not-always-funny installments of Louie, which were rightfully hailed as "brave," "experimental" and "mostly free of black T-shirts."

Maron (IFC) Marc Maron didn't stray too far from the formula of his debut season in his second go-round: How difficult it is to be Marc Maron specifically, and a middle-aged white dude with a podcast in general. Still brilliant.

Orange Is the New Black (Netflix) Season 2 leaned more dramatic than comedic, and pulled killer performances from everyone in (and out) of Litchfield Penitentiary. Creator Jenji Kohan is well on her way to achieving the heretofore-thought impossible: Topping her previous series, Weeds.

The Leftovers (HBO) Life sucks when you're not Raptured, and The Leftovers was the ultimate summer-bummer wallow, not to mention the vehicle that finally made Justin Theroux matter.

Rectify (Sundance) And while we're on the topic of dramas filmed in Depress-o-Vision ... damn.

Longmire (A&E) In its third season, Longmire fully broke away from its Justified Out West trappings and became a gripping, dusty crime drama in its own right. A&E rewarded this creative triumph—and high ratings—with a cancellation notice in order to make way for more Duck Dynasty. Fortunately, Netflix came to the rescue and Season 4 will be streaming by late 2015. I'm beginning to understand you cable-cutters ...