Recent data provide more insight than the U has ever had into sexual violence among students. 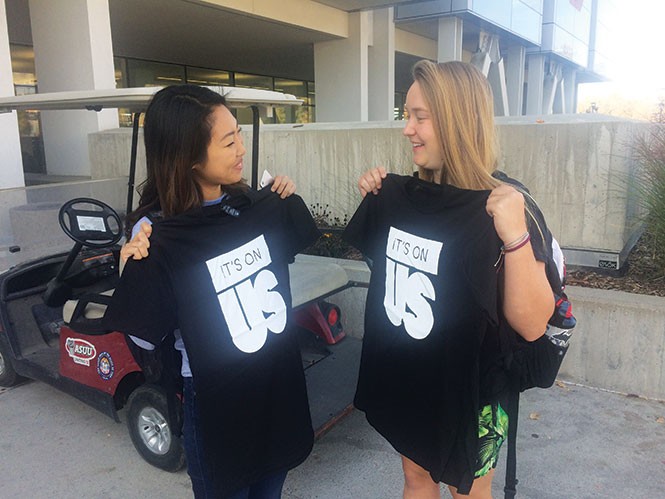 University of Utah freshman Teenie Noskowski believes rape on campus is a national problem. She urges friends of any gender to watch The Hunting Ground—the 2015 documentary chronicling problems faced by students who report sexual assault to their universities. She signs petitions and wears T-shirts pledging to fight sexual violence at the Salt Lake City school of approximately 32,000.

If any of her college friends told her they were sexually assaulted, Noskowski would help them seek out resources at the school. Only problem: She's not exactly sure what those options look like or where to find them, she acknowledges.

"I know I would go to someone in authority," the Speech and Hearing Science major says. "I know there's social-justice advocates here, but I don't know where."

Noskowski isn't alone, according to results of an optional survey of 4,000 students in October. Half her peers don't know the mechanics of making an official complaint or where to get support on campus. The data come from an anonymous, 20-minute survey taken by roughly 14 percent of U students in January. A little over half of participants were women.

Noskowski didn't participate in the survey because she still was a high school senior living at home in the Bay Area when it was sent out. But she received the results in October—along with students, faculty and staff—in an online university newsletter.

The data show the U needs to do a better job of communicating where students can get medical help, counseling and schedule changes, says Dean of Students Lori McDonald. She notes students can get those services without having to make an official report, which requires rehashing details with an administrator or police.

"We're constantly trying to get that information in the hands of students," McDonald says. "We just have to constantly promote it in several ways."

It takes Noskowski a minute to recall a presentation she heard in July on what to do if you are sexually assaulted at the U. New-student orientation was a whirlwind where she also charted out her course requirements, tried to avoid getting lost on campus and began making friends.

In addition to the seminar during the two-day orientation, the school also hands out brochures and hangs up informational banners. An excerpt in the school-issued student planner also goes over the details. McDonald and her colleagues now are considering what else to do to get the message out.

And it's not just U students who are largely in the dark. The 50-50 divide "is pretty consistent across schools," says Anna Voremberg, managing director of the national group End Rape On Campus. At the University of Oregon, for example, about 70 percent of students reported they were at least somewhat knowledgeable about where to get resources; 60 percent had a similar amount of confidence that they knew where students could go to name a perpetrator to administrators.

The lack of awareness, Voremburg says, is "a health issue."

If students want to make a report to police, U victim advocates can show them how. If they would like the school to investigate and potentially discipline the accused student, they can go to the U's Office of Equal Opportunity and Affirmative Action (OEO/AA), which enforces Title IX—the federal law barring gender discrimination in education. But that's an option only if the perpetrator they identify also is a student.

The OEO/AA works differently than a police agency: Its investigation is conducted in private, involving the reporting student and the accused student, plus any witnesses. An OEO/AA team determines whether an assault was more likely than not, and its finding can be appealed by either student to a panel of faculty and students. But many at the U don't know that. Three in 5 survey respondents said they were uncertain what happens once a report is made.

Students don't need to go through the quasi-judicial process to get resources. Victim advocates can get them access to counseling, and the dean of students can arrange extensions on coursework without having to tell professors exactly what happened.

McDonald and her colleagues have long struggled to communicate the options.

"I was disappointed that not more people knew about resources on campus," McDonald says, "but I wasn't that surprised."

Her counterparts nationwide are conducting similar surveys under guidance of the U.S. Department of Education's civil rights arm, though each campus query looks a little different than the next.

The department's Office for Civil Rights is responsible for enforcing Title IX, the law known for mandating female representation in college sports. But Title IX also pertains to sexual assault and harassment, saying campuses must keep students safe and on track to graduate even if they have come forward as victims of sexual violence.

Failing to comply could threaten a school's federal funding, but no college has ever been denied the money for this reason. Most schools agree to clean up their policies if they are found in violation. Students, for their part, can kick-start a civil rights investigation if they believe their school mishandled their report.

That's what happened at the U after 2016 graduate Nisha Kavalam filed a federal complaint with the Title IX office, which opened its investigation in June.

Kavalam thinks it's noteworthy that more than 90 percent of students in the survey agreed the school would handle reports in a way that's fair and timely. She, too, believed the process would be just—until she went through it.

City Weekly generally does not name people who say they are victims of sexual violence, but Kavalam agreed to be identified in this story.

In 2015, an initial review by the school did not support her claim of being assaulted off-campus, which surprised her. She believed the evidence was clear that she never consented, but the school said there was not enough evidence to make that determination.

Kavalam appealed the decision and ultimately won, but the process in its entirety took a year, and she and the other student had graduated by the time it was over. Kavalam believes the timeline should have been speedier.

Still, she believes "the U is headed in the right direction" with the survey.

National groups such as Know Your IX have assisted students in making the complaints.

Federal privacy law generally prevents the U from speaking about specific cases. But the school says it is saddened to hear about the poor experience, tries to be fair to all students and is constantly revising and updating its policies.

The U is planning to do the analysis every 2-3 years to measure its progress, and is weighing new ways to encourage more students to participate. This year, students who filled out the online form received a pair of socks with their school's emblem and were entered in a raffle for $50 bookstore gift cards.