New SLC venue The Rail faces confrontations with irate neighbors and a felonious past.


Past Ghosts
The twists and turns of the Rail story arguably began in 1978, when Cook met Gollaher while both were serving a mission for The Church of Jesus Christ of Latter-day Saints in Canada. Back in Utah, Gollaher managed a cement and concrete business, while Cook and his brother ran painting contractor Cook Bros.

Cook first learned Gollaher was a sex offender when his friend went to prison in 1996, after Gollaher was convicted of one count of sex abuse of a child, a seconddegree felony, for touching an 11-year-old girl’s genitals on a trampoline.

Although he initially denied the charge, Gollaher is forthcoming about it now. “I lied,” he says, close to tears. “This child did not lie.”

When Gollaher (pictured at left) got out of prison in 2004, “I didn’t stop and hide,” he says. His past has created problems for him and, as Cook found out with The Rail, for his friends. “If a sex offender doesn’t hang his head low and walk around unseen, that is very irritating to some people,” Gollaher says.

In 2006, Gollaher was charged with another abuse incident, but it was dismissed. “It should never have been filed,” Nakamura says, who met Gollaher when he defended him on that charge.

Gollaher introduced Nakamura to the concept of a multi-use venue center, and the lawyer eventually became a partner in The Rail. Now, along with being The Rail and Gollaher’s counsel, Nakamura also provides what he says is “its big-picture vision.”

When Gollaher bought the neighboring warehouse in 2007 that was to become the Rail, he says he put it in his wife’s name for liability issues.

In May 2009, Sharon Gollaher, as president and owner of The Rail Event Center, and Cook as local manager, applied for a business and liquor license for a corporate event center. Scott Gollaher, with his felony record, would be prohibited from owning liquor licenses.

The Lemonheads
In the late spring of 2009, a woman using a pseudonym contacted Rail neighbor and local nonprofit developer NeighborWorks. The woman, who also declined to provide her real name to City Weekly for publication, was concerned that a convicted sex offender, Gollaher, was opening an all-ages venue. But NW’s Garciaz, who actively lobbied for The Rail and wrote a letter to the Utah Department of Alcoholic Beverage Control in support of its liquor applications, says that she found the woman’s legitimacy questionable.

The same woman also contacted former City Councilman Eric Jergensen by e-mail on June 1, 2009, alleging that Gollaher “had merely licensed [The Rail] in his wife’s name in order to not have any trouble with the opening.” In a reply to the woman, Jergensen says that he asked his staff to investigate.

Shortly after Sharon Gollaher, who herself has a misdemeanor conviction in her past, applied for beer and liquor licenses, she withdrew the applications, because, according to a letter from DABC’s director Dennis Kellen to The Rail’s general manager Brad Davis, “of her own disqualifying criminal history” and also so The Rail could be restructured. 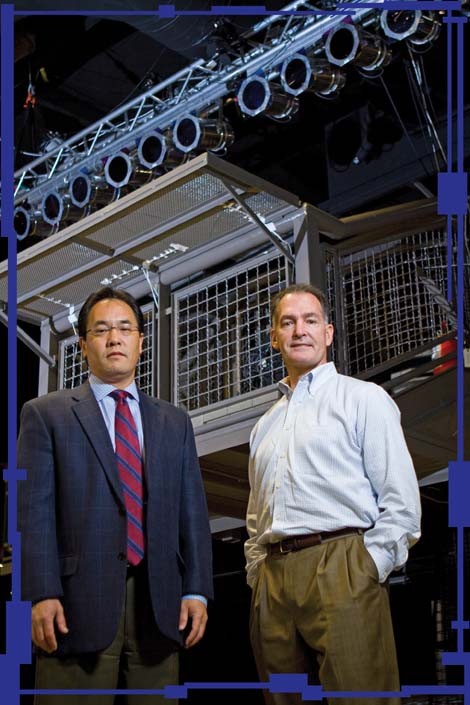 Cook, however, says that Sharon Gollaher resigned because Cook and Nakamura (pictured at left) would only take on the management of The Rail if they were independent of the Gollahers. In late June 2009, Cook and Nakamura ended up owning 50 percent each of the event center, but not the property housing it.

In late July 2009, the day before Rail GM Davis and Cook made their presentation to the DABC for a beer license for the ground floor and a club license for the upper floor, the liquor commission received a letter from the same pseudonymous female e-mailer who had complained to Rail neighbors and city authorities. She pointed out Gollaher’s sex-offender status and alleged he was still involved in The Rail.

The DABC postponed its decision until certain “issues” were resolved, among those the presence of minors on the same floor where beer would be sold and the extent of the Gollahers’ involvement. By this point, The Rail was running out of time before its scheduled official opening. On Aug. 2, 2009, Davis wrote to DABC compliance officer Stephne Hanson that The Rail had canceled one event due to the license delay, and with its grand opening just three weeks away, the license issue was “causing a significant financial stress on the business.”

Attorney Nakamura further resolved the minors’ issue by withdrawing the beer-license application for the ground floor during his presentation to the DABC commission on Aug. 20, two days before the grand opening. He told the commission The Rail had developed relationships with “our resident neighbors.”

Even though DABC Commission Chairman Sam Granato scolded the owners, saying, “You put a lot of lemons in our path the last two or three months,” The Rail got its liquor license.

Frat-Boy Blues
Nakamura’s statement to the DABC that The Rail had developed relationships with its neighbors puzzled residents of Bliss Court. The first they learned of The Rail’s grand opening on Aug. 22, McCracken says, was from an officialsounding leaflet put on their doorsteps informing residents of their rights regarding bothersome noise. The leaflet, however, wasn’t from the county, as Bliss Court residents assumed. In fact, it turned out the mysterious woman who was e-mailing authorities her complaints about The Rail had struck again.

Despite repeated calls on Aug. 22 to the police, bass vibrations beginning in the early afternoon continued until 2 a.m. with no reduction, McCracken says. “After the third or fourth hour, it’s all you hear, all you focus on. It’s like a frat boy who won’t turn down his stereo.”

Cook says the first The Rail heard of a problem was when the police asked them to turn the sound down on opening night. “The least effective way to communicate with me is to call the police,” he says.

Since then, Nakamura says, “we’ve been actively trying to contain the noise.” Gollaher says the Rail has spent $200,000 on sound improvements including a sound curtain, a special sound-absorbing paint, a cinder-block wall and blankets on the roof.

“Bliss Court has legitimate concerns,” Nakamura says, “but I’m disappointed they have refused to acknowledge all we’ve done.”

McCracken documented and tape-recorded audible bass in her home from most of the concerts The Rail has held since opening. At first, police were sympathetic to McCracken and her neighbors’ plight. Several October 2009 police reports note the music from The Rail being “unreasonable” from both inside and outside a Bliss Court residence and “loud/audible thumping music” coming the club.