When the Dems Come Marching In

A few days before holding a rally in downtown Salt Lake City earlier this month, Sen. Elizabeth Warren acknowledged her curious choice to visit a state that hasn't turned blue in a presidential election since 1964: "Presidential candidates don't always go to Utah because it isn't a battleground state," she wrote in a tweet. "But I'll be there this week because I'm running to be president of the entire United States. Join us and let's do this together."

Warren's visit comes on the heels of former housing secretary and fellow Democrat presidential hopeful Julián Castro's visit in February. "When candidates come here, they tend to come here to want to raise money," Matthew Burbank, an associate professor in the University of Utah's Department of Political Science, says. "There is some big money that can be raised on the Democratic side."

Rep. Patrice Arent, D-Millcreek, is more blunt. "There are many candidates that come, go straight to Park City, and leave," she says. But Castro and Warren's stops were notable because they weren't just mining donors for campaign contributions. Instead, they gave speeches to enthusiastic hordes, and tried to stand out in a crowded field before, most likely, challenging an unpopular incumbent president perennially mired in controversy.

Local votes matter more in 2020 than in years past, thanks to a bill Arent sponsored in the House last legislative session that puts Utah among the 12 states hosting a presidential primary on March 3, 2020, aka Super Tuesday. In 2016, Utah Republicans and Democrats held presidential caucuses before the November general election. Pandemonium ensued. Long lines, ballot shortages and limited parking burdened voters who took time to cast a ballot—in some ways a symbolic gesture since nominees had largely been decided by then. But next March will be different, Arent says, because, "it will give Utah voters more of a voice in who the candidates are for all of the parties."

That incentivizes candidates of all stripes to show their faces in ultra-Republican Utah. Burbank expects more Dems will visit and campaign this time around, not just raise money, thanks to Arent's bill and the sheer number of hopefuls vying for their party's nomination. "There are so many [candidates] and they're obviously competing for largely the same dollars and voters," Burbank explains, meaning would-be candidates who visit oft-ignored states like Utah could gain an edge over their rivals. "If you come here and nobody else does, you might be able to do well in the primary," Burbank says.

Rising Democratic star Shireen Ghorbani believes candidates' courting voters in deep-red states like ours is a good thing. Ghorbani knocked on doors statewide and campaigned for a full year for federal and local office before being elected Salt Lake County councilwoman earlier this year. Many people told her that a political candidate had never stood on their doorstep and personally asked for their vote. "I do think there is a general sense of feeling neglected out here," Ghorbani says. "When we have candidates that don't step foot in Utah, I think it's hard for anyone to feel like they get us." 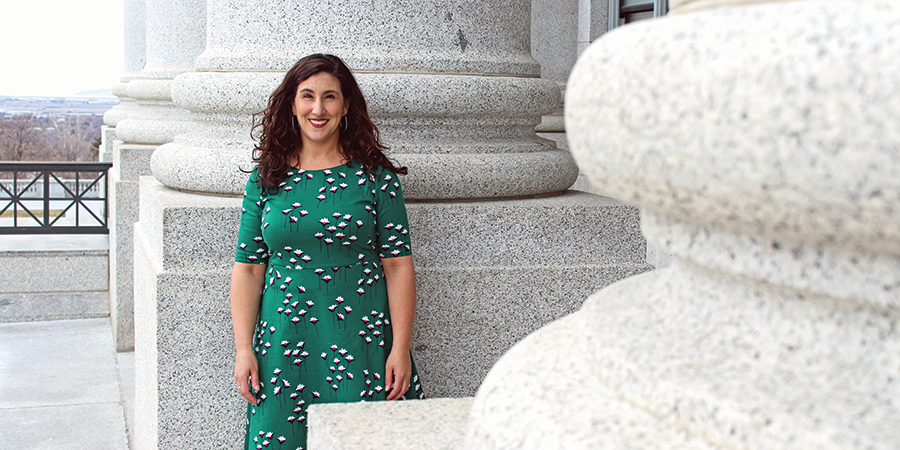 "I think there's a desire for people who are willing to, in concrete ways, really reach across some traditional political lines."—Shireen Ghorbani tweet this

Utah Democratic Party Chair Daisy Thomas sees the sheer number of candidates as a plus. "With so many different voices in the race right now, they're going to appeal to different parts of our population, and that's just good for us," Thomas says. More candidates means more ideas on how to tackle important issues like health care reform and strengthening unions. "I think as long as the candidates are authentic and are speaking to real issues, that's really all that matters," she continues. "I want candidates who are going to be authentic in who they are ... and I want them to be providing solutions, and not just empty rhetoric."

And, Arent adds, Democrats must show they can run a successful race beyond the March primary. "They are trying to convince Utah voters that they can win," she says.

As usual, the Beehive State went red in 2016's general election, but Donald Trump didn't earn the majority of the votes. Third party spoiler, Mormon and former CIA officer Evan McMullin garnered more than 20%, limiting Trump's share to about 45%. "Trump just didn't pull in Republican votes the way a Republican candidate usually would in the state," Burbank says, laughing when asked if a Democrat could carry the state in November 2020. "I would say it's very unlikely."

One thing is sure: Utahns love their Republicans. So, City Weekly reached out to three prominent ones who've won statewide races—Gov. Gary Herbert, Sen. Mike Lee and Sen. Mitt Romney—for suggestions on how Democrats could best appeal to a wide swath of Utahns. Herbert declined to comment, but Lee encouraged Dems to engage with all Utahns, not just those in the capital city. "I hope Democrats remember that Utah is more than just Salt Lake and the tourism industry," Lee said in a written statement. "Those are very important parts of our state but Utah is also filled with farmers and ranchers and miners, and they deserve to be heard in Washington, too."

Romney focused on the country's "unsustainable $22 trillion national debt" when asked for advice. "Candidates need to come up with policies to reduce our national debt and get our fiscal house in order so that we stop saddling our country and our children with hundreds of billions of dollars of interest," Romney said in an emailed statement to City Weekly. "Effective management of Utah's public lands, which make up two-thirds of the state, should also be a top priority for candidates campaigning here. Utahns deserve more involvement in decision-making and management of these lands."

Still, if anyone knows the issues important to rural and city-dwelling Utahns alike, it's Ghorbani. She traveled all across the state—from Farmington to St. George—in her battle for U.S. Rep. Chris Stewart's seat, a fight she ultimately lost. "There's a general sense across many people that we're looking for a politics that reflects a sense of common decency, decorum, a sense of wanting to get people working together to solve some of the big problems that we're facing," Ghorbani says. "I think there's a desire for people who are willing to, in concrete ways, really reach across some traditional political lines."

She says national Democrats' campaigning here is a useful exercise in and of itself, regardless of what color the state ends up being in 2020. Engaging with all voters, not just those likely to vote Democrat, made her a better, more thoughtful candidate. The move, she says, has also yielded context for her county council decisions. "It is going to inform your world view and make you a better leader," Ghorbani says. "I believe that that time I spent knocking on doors and talking to people from a variety of political backgrounds, coming at me with a lot of different life experiences, made me a better public servant."