The Trainwrecks hit the scoreboard first, but their lead was short-lived: Greatest Hits jammers Triple Shot Misto and Ctrl-Alt-Delete proved to be an unbeatable scoring combo by the third jam and kept CRR well ahead for the rest of the bout. Not that JCRD jammers Colonel Skirts, Slick Tease, Sarin Gasp and Le Tigre (skating her final bout with the league) didn’t give it their all—in particular, Sarin Gasp was playing so aggressively it was tough to tell if she was on offense or defense at any given point. Score at halftime: Castle Rock 50, Junction City 36.

In the second half, the rest of the Trainwrecks took a cue from Sarin Gasp’s balls-out attitude and strengthened their defense. On the scoring front, team captain Colonel Skirts made several impressive point-grabs, even nailing a double Hot Trick (a 10-point jam) late in the half. But, JCRD could never overtake CRR’s lead. Final score: Castle Rock 120, Junction City 71. 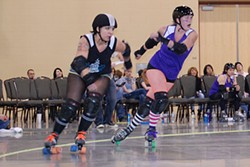