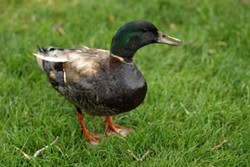 Chevron and Salt Lake City officials just finished a press conference in which the company said 33,000 gallons are believed to have leaked. That's an increase from the previous reported estimate of 22,000 gallons. ---

Reports indicate as many as 300 birds have been oiled. A cause of the spill has not been determined but is believed to be related to a power outage. On June 11, a Chevron pipeline began spilling oil into Salt Lake City's Red Butte Creek. The oil eventually flowed through Sunnyside Park near 1100 East, then onto Liberty Park and the Jordan River before the leak was capped June 12.

Chevron representative Mark Sullivan said at the press conference that "the decision was made to collect [oil] here at Liberty Park," where access was best for collection equipment and vehicles. Sullivan said 1,000 barrells, or 42,000 gallons, of oily water have been delivered to the Chevron Refinery in North Salt Lake. The U.S. Environmental Protection Agency says it is monitoring the cleanup effort and has brought "a water recovery expert from the National Coast Guard." Salt Lake County Animal Services will now be the lead agency on wildlife recovery.

Chevron says air monitoring at the effected areas shows no signs of "acute or toxic levels," but the fumes from crude oil are toxic and the oil is a skin irritant. Salt Lake City reopened the north end of Liberty Park on June 13, but since that time, there have been reports of residents becoming ill after spending time there; reported symptoms have included vomiting and headache. Health officials advise anyone who is effected by the smell to leave the area.

The City also advises residents with oiled yards to not clean up the oil themselves, but to contact Chevron for professional cleanup. Call 866-752-6340.

Check back to CityWeekly.net/NewsBlog for the latest news on the Chevron Pipeline Oil Spill, and the community response.

KRCL's RadioActive will devote the hour to the oil spill
Featuring:

The following photos are from Dan Gorder. They were shot June 12.