Your Guide to a Not-So-Crappy Halloween Costume | Buzz Blog

Your Guide to a Not-So-Crappy Halloween Costume

Halloween isn’t about decorating your house, carving pumpkins or those little bite sized Snickers. No, Halloween is about getting stupid drunk in a Big Lebowski “Jesus” costume and telling people at your buddy’s party “Don’t fuck with the Jesus” until everyone gets really uncomfortable and leaves.---

However, “The Jesus” was a great costume roughly 13 years ago. So what about this year? Well, Halloween is right around the corner and it seems to me that it’s become increasingly brutal to slap together a decent costume. I know it’s late in the game and you’re panicking, but I want to remind you that it’s not your fault. I believe there are 3 major factors this year that are threatening our ability to look sweet this Halloween …

1. The stupid media has been focusing on the same shitty reality stars and celebrities month after month. All we saw on television and the Internet for the past few months was Kim Kardashian and this asshole.

2. None of the politicians (especially out of the GOP candidate field) are interesting enough to constitute a Halloween homage. If you’re gonna dress up as that guy, you might as well dress up as this. I know what you’re probably thinking: “What about Michelle Bachman”? Sure, go ahead … and have fun carrying around a bottle of Clear Eyes because your eyelids are taped to the side of your face. I wouldn’t recommend it.

3. Most of the movies in 2011 were straight-up garbage. I’m sorry, but not one single fuck should be given to Captain America, Bridesmaids, Thor, Green Lantern and especially this 90-minute car commercial.

It would seem that there isn't much left, but you’re wrong! To save you some time and money, I present the Secret Handshake’s top 3 male and female costumes for 2011 (along with a few honorable mentions). The idea is simple: Stay under $50 and keep it basic (in other words, no costumes that take 2 months to put together). Every costume was found and combed in under an hour at various SLC Halloween shops.

Also, in an effort to keep you from getting super-bored and looking at the ads on the side of the page, I have opted out of mentioning any staple costumes like zombies, vampires and Lady Gaga. Here we go … 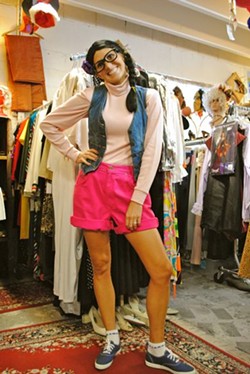 
Though the song is awful, her video for "Last Friday Night" isn’t that bad. If anything, her Punky Brewster super-nerd outfit is a costume worth considering. This costume came to $44.33, but you can probably trim it down even less if you rummage through your mom’s closet. 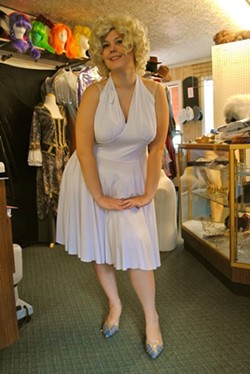 Marilyn has always been a great costume, and what better than a recent sex-tape scandal to make her relevant? This costume is a rental and goes for $45 a day.

Too soon? Absolutely not. I have a bad feeling that there is going to be an army of Amy Winehouses this Halloween, and it only makes sense -- she’s a dead rock star. The Winehouse costume is easy, all you need is the wig and bunch of accessories. This one came to $35 minus the clothes.

Now that were starting to see the first ripples of the Obamacare, what better costume to scare the shit of your Republican grandparent’s than this bad boy? House of Chuckles is selling everything for 50 percent off right now, so this costume was only a mere $39.

Store: House of Chuckles, 247 E. Broadway, SLC
Phone: 801-532-1741
Why shop here? As mentioned before, everything is 50 percent off. It has a nice selection of pre-made costumes, masks, make-up, wigs and accessories. Definitely worth checking out.

If you’re a fan of SNL then you saw Jim Carrey last season do his impression of Black Swan. If not, then check it out. It takes a certain type of man to dress in a tutu -- a brilliant man.

Store: Farina’s Costumes, 24 Kensington Ave., Suite B, SLC
Phone: 801-466-3006
Why shop here? The nice ladies at Farina’s will help you build just about any costume. Tons of sale costumes plus rentals. Nice- sized selection of accessories and wigs.

Author Wolf claims he will rule over Halloween with an iron fist.

Gaddafi is a costume that you must respect. 2011 might also be the last year you can dress up like him and have people know who the hell you are. Actually, when I tried this costume on, a customer thought I was Michael Jackson. Damn it. But it’s still awesome. This costume is a rental and will set you back $50 a day.

Store: Hale Centre Theatre’s Costume Shop, 2200 W. Alexander St., West Valley City
Phone: 801-984-9001
Why shop here? Hands down the biggest rental shop in the SLC area. This warehouse is massive, multiple floors of costumes and, for God’s sake, they have multiple armories. The employees will help you piece together just about any costume … any costume.

Disclaimer: it should be known these ideas are no longer usable or sort of funny now that you’ve read about them here.