Before you go jetting off to ... wherever it is you plan on spending the weekend, might we suggest some end-of-the-year local music to listen to? --- We'll start with the band Summerteeth, a four-piece indie-pop/folk group from SLC who kinda came out of nowhere over the summer with their self-titled debut album back in June. I'd comment more on the band, however, it seems they've only done some occasional shows since the release and have failed to promote themselves properly with any kind of online presence beyond Bandcamp. A couple of weeks ago, the group released their follow-up EP, How I Got In The Room. It plays much like the first album with some slightly louder tracks, so one could rightfully guess that these were leftovers from the recording process that they didn't want to leave behind. You can download the album for free off their Bandcamp page.

Next up, since we're in the holiday spirit you'll be seeing a few Christmas-related albums on the list, and the first comes to us from Savoy, a super-group of sorts made up of Joshua Payne, Ryan Tilby, Bart Olson and Sam Payne. The jazz-oriented group have mainly been doing covers, and have released a few albums over the year starting with their debut album Rise Up And Shine back in June, and a live album that came out in October. The band is back with their own take on contemporary holiday classics with the full-length album Merry Little Christmas. It's a nicely recorded album with a jazz/blues spin, at least worth a listen if you're into the genre or the season. You can download the whole album for $10 off their Bandcamp page or on CD Baby.

Moving back to folk, we see the debut release from SLC acoustic players Bearclause. The five-piece group (seen above) started out over the spring of 2011 when roommates Megan Monroe and Elyse Winn decided to take a chance on their shared musical dreams and put together the group on a whim with fellow musically inclined friends. The group had been gaining traction among indie fans as an opener band during the summer, mainly playing gigs at Kilby Court where they've become a crowd favorite. The band's first EP, Brave, came out two weeks ago with quiet fanfare at the Beehive Tearoom, and you can snag a copy for $5 off their Bandcamp page.

From folk to rap, we move to the latest release from local emcee and producer Syqnys. Probably one of the more controversial names we have in the Utah music scene, Syqnys really isn't afraid to drop a line or two on topics few musicians would dare tread in any tone. Racism, abortion, LGBT rights, atheism, politics and sexism are just a hardy sampling of the themes you can find in his third full-length album, Hypatia's Reign, which came out back in mid-November. The album and its content may not be appealing to everyone who loves rap/hip-hop, but you gotta give the guy respect for taking the chance rather than creating a piece of mundane beats. You can snag the 19-track release off his Bandcamp page.

Next up, we have the latest release from Americana artist Shrimpton. To be clearer, the solo singer/songwriter Alex Shrimpton, who's been a fixture of the smaller indie shows and coffee shops of SLC since he started in 2009. His first release came in September 2009 with the full-length album A Beat, With In A Beat, With In A Beat. But since then he's been pretty quiet on all fronts ... until last week with an out-of-the-blue sophomore release, Gregson Ave. The album has its own brand of experimental pieces, much like the first, which may not appeal to everyone into the genre. But it's worth at least a listen on audio merit alone. You can get the whole thing free at a “name your price” purchase on his Bandcamp page.

While we're on an indie kick, let's move over to the latest release from the five-piece ensemble that is Bright Whistles. If this group's music sounds slightly familiar, it should, as it's being headed up by Logan Hone and Shane Webb from the now defunct soft-alt group The Continentals. These guys have been hard at work putting out material starting out with the KLICKA EP back in May, followed up with two more EPs -- Songs in June, and ONE in July. Now this month, they've got their fourth EP, a little four-track piece aptly named TWO. You can pick up this album and everything else they've recorded off their Bandcamp page for free! 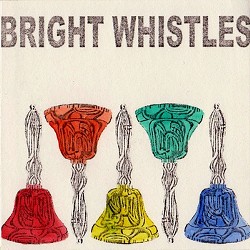 Continuing the indie vibe, we have the debut release from the “romantic folk” group Raspberry Noise. Formed out of the broken pieces of the group Clusterfunk, Christopher Stevenson and Alec Jackson took to writing music they really wanted to without the drama, incorporating musicians as they went along to hone their folk sound. The current lineup sees them as a five-piece, having gone through a few changes, and now they've got a short seven-track album out by the name of Birds. You can pick up a copy for a “name your price” purchase off their Bandcamp page. (Note to Bandcamp: you really need to buy advertising with CW!)

If you're looking for something a little more peaceful and piano oriented, might we suggest AntBut, the solo project from Anthony Butterfield, a Utah school teacher who has been making music in his spare time as a hobby. He's put together a set of releases due to come out over the next few months, starting with this full-length album entitled Red. You may not be able to see him perform live, but at least you can listen and relax to it. You can grab the whole album for just $1.50 off his Bandcamp page.

Moving on to material that actually came out this week, we'll start with the debut EP from L'anarchiste. This is a five-piece project made up of founding member Rob LeCheminant, working with Alex Gilvarry, Erik Maloy, Andy Westenhaver and Jake Burch. By their own definition, the band has no definition and refuse to be pigeonholed into a genre, even though they have listed themselves as an indie folk/rock group, which is rather fitting. The group have found a nice balance between rock-like rhythms and folk overtones, much like the aforementioned Continentals had when they were on top. The group released this self-titled five-track EP this past Tuesday, which is totally worth a listen for the compositions alone. You can download it now for a “name your price” sale on their Bandcamp page.

Finally on the list is the last of the holiday albums that we know of, as several of Utah's finest celebrate A Voltron Christmas. City Weekly's own music editor Austen Diamond already wrote about it in this short article, so we'll get to the nuts and bolts of this release: a seven-track compilation made up of bands such as YYBS, King Niko, The Last Look and others doing their own covers of non-traditional holiday classics for charity. You can download Volume One for $5 off their official Bandcamp page, with all proceeds going directly to the Road Home.