Saturday, April 14: The packed house at the Derby Depot faced two potential problems on a rainy spring evening: 1. An unevenly matched bout that could become a blowout, and B. Out-of-service bathrooms. ---

Wasatch Roller Derby’s Black Diamond Divas are a formidable team, but Salt Lake City recreational league (meaning, not exactly prepped for serious competition) the Red Rockettes weren’t about to be … wait for it … flushed without a fight. It only took ‘em the first period to get warmed up: New WRD skater Bunz Bunny, who debuted impressively with the Salt City Derby Girls in 2011, put the Black Diamond Divas on the scoreboard first, followed by a brutal 25-point hit from teammate Sweet Jane. Red Rockettes jammers Italian Hit Girl, England’s Glory, Nico Noir and Joss Wheelin’ eventually eked out some single-digit runs, but the Divas (even with jammer Vishus Trollop wiped out in a bruising late-period pileup) owned the first half of the bout. Score at halftime: Black Diamond Divas 93, Red Rockettes 23.

Nobody expected an Average Joes vs. Globo Gym comeback in the second half (Netflix Dodgeball—it’s a sports classic), but when Italian Hit Girl turned in a 20-point jam for the Red Rockettes within the first 10 minutes, it began looking more like a bout than a shutout. Slowly but surely, the Rockettes tightened up their defense and began chipping away at the Divas’ lead—until jammer Betty CrackHer broke the BDDs’ scoreless trend late in the period with a 15-point deathblow, instantly followed up with a 10-pointer from Vishus Trollop. Valiant last-minute scoring tears by the Rockettes’ England’s Glory proved to be too little, too late—that ship, and most bladders in the house, had sailed. Final score: Black Diamond Divas 148, Red Rockettes 108. 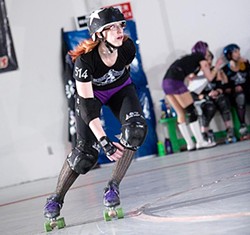