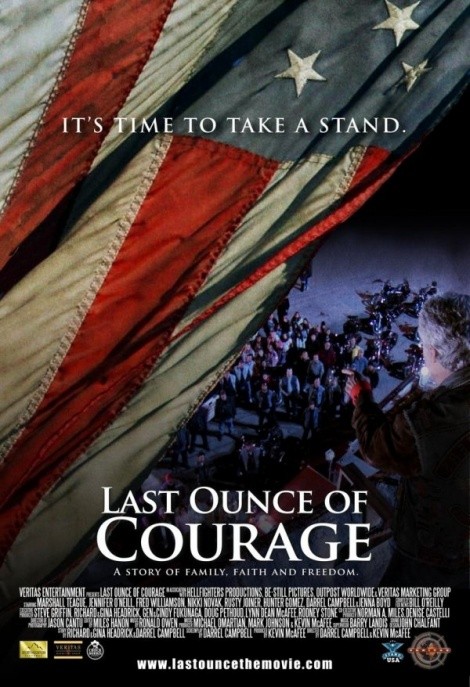 Just for argument's sake, let's assume that you're a well-meaning person who believes the secularization of America has gone too far. You wish religious Christmas carols could be sung in schools, and you think it's a shame that Christmas trees and Nativity scenes have been removed from public buildings. You are a good, God-fearing American, and you fear for a nation that has turned Christmas into X-mas.

You can be that person, and still think Last Ounce of Courage is a tremendous pile of shit.

Because this isn't just filmmakers Darrel Campbell and Kevin McAfee making a case for religiosity in the public sphere; it's a case study for any debate teacher who wants to show students what underhanded debate tactics look like. There's reason enough to dismiss it simply because of its sloppy screenwriting and mediocre performances. When you throw in its fundamental dishonesty, you've got epic-scale awfulness.

The story begins with Bob Revere (Marshall Teague) bidding farewell to his son, Thomas, as he heads off to a battle zone and leaves behind a pregnant wife. Thomas is killed in action, and his widow, Kari (Nikkie Novak) and young son eventually move to California. Fourteen years later, Kari and the now-teenage son, Christian (Hunter Gomez), return to small-town Mount Columbus, where Bob is now the part-time mayor when he's not being a kindly pharmacist servicing biker-gang members with suspicious gunshot wounds. But Bob finds a real purpose, inspired by Christian, when he decides he's not gonna take this War on Christmas lying down, and will risk the wrath of famous civil-liberties attorney Warren Hammerschmidt (Fred Williamson) if that's what it takes.

Campbell and McAfee are plenty sloppy on a basic storytelling level, never wasting time to explain why Kari and Christian move back to town, or why the half-hearted introduction of a possible romance between Kari and her dead husband's childhood best friend is necessary, or what we're supposed to learn from the stuff about Bob's own military experience. Throw in a script that stops dead at regular intervals for speeches and talking points -- all punctuated by the rat-a-tat of military drums -- and it's already worth ignoring, though perhaps no more so than a hundred other amateurish, low-budget dramas.

But Last Ounce of Courage makes the leap to truly reprehensible as it turns into Straw Man Argument: The Motion Picture. Bob seethes over the fact that the rescue mission at which his family volunteers was forced to take down its “Jesus Saves” cross because “someone said they were offended,” a thing that has apparently happened only in the slippery-slope minds of the paranoid. He argues to Hammerschmidt that, “If I want to have a Nativity scene in my yard, I have that right” and “If we want to have a Christmas tree” in front of a public building, well, we have that right, too—as though putting those two sentences in proximity makes an individual’s home and a public building the same thing. And when a group of citizens gather to sing a religious Christmas carol, Hammerschmidt asks the chief of police, “Are you going to arrest these people?” because he’s apparently an idiot in addition to being an atheist liberal.

Even worse is the way Hammerschmidt is turned not into the voice of the opposition, but an active force for evil. When the rescue mission receives a notice from the health department warning that it might be shut down, Bob angrily accuses Hammerschmidt of engineering the ploy—which Hammerschmidt denies, but the subject is immediately dropped, leaving us to conclude that a civil-rights attorney will happily let homeless people starve to achieve his goals. A city-council decision to reverse Bob’s decorations is greeted by Hammerschmidt with a superior smirk. And then there’s the moment when the town’s Christmas tree is torn down violently in an explosion of red bulbs that make it look like it was being shot to death by terrorists. As the tree falls, we see the angel at its top tumble and come to rest on the sidewalk—whereupon a black dress shoe steps on and crushes the angel. We never see the owner of that shoe, but c’mon—who else would be walking around in black dress shoes stomping on the messenger of the Lord?

Entire additional essays could be written about the climactic scene in which Christian and his friends at the local middle school rebel against the secularized “holiday play” and turn it back into the biblical Christmas story, a plan that requires the mincingly gay drama teacher—I swear I’m not making this up—being locked in the closet. It also involves Christian showing the assembled audience his dad’s last video—which includes a proclamation of faith immediately preceding his bloody death—as well as a non-ironic use of the infamous Slow Clap. But the problem with Last Ounce of Courage isn’t primarily that it’s incompetent and offensive; you can find that in any given Adam Sandler movie. It’s that it refuses to find an honest way to address legitimate concerns about whether secularization has gone too far, letting fear of litigation overwhelm sensible policy making that preserves individual religious liberties. It’s a stacked deck of bad melodrama. For a movie called Last Ounce of Courage, that adds up to a pretty cowardly way to make a point.