Last Monday, I ended up at Juggalo Invasion 666 at Liquid Joe’s. Why? Because if there’s anything happening in Salt Lake City involving Juggalos, it’s worth reporting on, am I right? My buddy Mike and I were sitting in the back, nursing beers while a short, chubby Juggalo was onstage, rapping ICP-like lyrics into the microphone: “I’ll put a severed toe, in yo butthole!”---

Obviously, he had my full attention as soon as he said toes would be going into people’s butts. The song was a classic example of why people can't stand Juggalos and the music they identify with. But I had to admit, in a weird kind of way, he was sort of funny and not a half-bad performer. 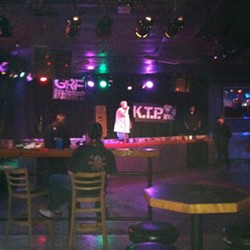 When he finished up his set, he got on the mic one last time and with an indoor voice said, “Man, I love all you Juggalos, for real. Ya’ll is family and I appreciate you coming out and listening to my songs. Word. I’m so grateful and I love all ya’ll. I’ll be kickin’ it in the back, so come have a beer with me. Thank you.” Maybe I had one too many, but I thought about how difficult it must be to get onstage, alone, and rap about toes in butts and then turn right around and be a polite, humble, human being.

This is gonna sound weird, but I actually started to feel guilty for hunting for material at a Juggalo party. The only reason I was at Juggalo Invasion 666 was for a quick-and-easy Juggalo story. However, on the drive home that night, I looked up at the cold, winter sky and I muttered to myself, “Juggalos … just … aren’t funny anymore.” Seriously, what's the point? It's too easy. And that's when it dawned on me: Juggalos have outlasted the jokes to the point that the jokes are now worse than the Juggalos. Let me explain.

Five years ago, Thomas Morton wrote a piece for Vice Magazine called “In The Land of The Juggalos.” In typical Vice fashion, Morton was a fly on the wall at the annual music festival The Gathering of The Juggalos. He spun a tale that not only highlighted an under-reported subculture, it scared the living shit out of us. Unbeknownst to Morton, he set off a never-ending tsunami of Juggalo jokes that would last nearly half a decade.

Because of Morton's success, Vice (which I swear was built on the backs of Juggalo jokes), Gawker, Village Voice, SNL and every soulless college grad who needed something “edgy” for their resume produced a “Hey, look -- Juggalos!” story. Now, despite all the pointing and laughing, it seems the Juggalos have stuck it out so long that the people who make Juggalo jokes are the assholes. This is evident in last season of SNL, where this skit pretty much puts the nail in the coffin:

Trust me. Juggalos are self-aware and even they know this skit sucked.

I know what you're thinking, “But Wolf, Juggalos suck and we need to tell them they suck, right?" No, they already know and they don't care. Face it, the battle is over. It’s been five long years of Juggalo jokes; nothing related to this topic is original or funny -- I'm talking to you, guy wearing a scarf indoors. Think about it: It must have meant something when Buzzfeed sent re-hashing joke recycler Matt Stopera to The Gathering last year and he managed to make Juggalos look awesome.

I’m sure Buzzfeed saw The Gathering as an easy way to make click-worthy content because, “Hey, check it out! Low-income white people drinking Faygo! Come on, guys, that’s funny, right?” What Buzzfeed fails to realize is, they make the exact same observations when they send reporters to rich white-kid festivals, like Coachella. Here, I made a Venn Diagram to better explain this: 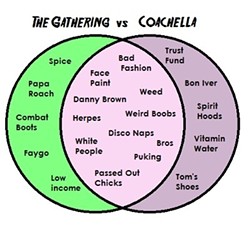 At this point you might be saying, “Nooooo! It’s not possible. It can’t be over. Juggalos bring it on themselves. Why don’t they understand that ICP is lame and The Gathering is gross! Aaaarrraauuuugh!” Please, please, you have to let go. Understand that making Juggalo jokes is like sharing a link to that KONY 2012 video -- no one cares anymore. Just stop, it’s already dead.

I will admit, it won’t be easy. I’ve made my share of Juggalo jokes in the past -- we all did; we're all guilty. But we didn’t know what we were doing; it was a different time back then, a simpler time, a different era. Maybe it's best we move along now and seek out a new subculture that'll have at least five years of material -- something like cyber-goths. Yes, cyber-goths.