I've got a number of releases to discuss today, as we end one month and barrel into the next. --- First up is the official debut release from the “hip pop” duo of Scott & Brendo, comprised of Scott Winn and Brenden Bytheway, who have put their production skills and light vocals to good use in what's a surprisingly catchy band. Over the past six months, they've been releasing singles off of what would eventually become their first full-length album, And Away We Go. You can download the full album off their Bandcamp page for $10, or just the instrumentals for $5.

The next one on the list doesn't officially come out until next week, but it's so damned good I had to talk about it ahead of time. Baby Ghosts, who came off an impressive year where they got tons of hype from almost every local music outlet, have just released their first new music since their debut full-length came out last year. The four-piece pop-punkers (seen above, photo by Teryn Skateygaga Mendenhall) are putting out a 7” EP titled Ghost In A Vacuum with the help of Lost Cat Records and Drunken Sailor Records in what looks like a awesome little package. You can pre-order the album for $5 off their Bandcamp, or just the digital copy for $4.

Moving to electronic for a moment, this past month also saw the release of works from Flamingosis, which is the solo project of musician and producer Aaron Velasquez. Even though he says he's been working on stuff since 2009, I honestly can't find much from him before today, so we're venturing into new territory together. He just put out an album on his Bandcamp page called Reworks, which seems to be a compilation of samples that influenced his musical career. I'ts actually not too bad; worth listening to, which you can do and purchase off his Bandcamp page.

While we're on Bandcamp, that's where the debut release from Watches came out. The band have actually been together nearly three years playing local shows, but haven't quite gotten things together for a proper release until now with this brand-new EP; funny enough, it's titled EP ... how clever. Kidding aside, the album ain't that bad; worth at least checking out. You can purchase a copy for $2 off their Bandcamp page.

Next up is the latest from Codi Jordan, who apparently dropped the band and went solo. But, I don't need to say much about his latest album, A Little More Less, because CW's Austen Diamond already did the work for me in his latest Liner Notes post. So, go read that and then go check out the release shows happening this week at Liquid Joe's and Brewskis.

Speaking of release shows, last night, Velour was the home to the debut release from Les Sages. The band is a seven-piece indie-pop/rock band comprised entirely of siblings! That's right, the current clan of Osmond kids can eat their hearts out, as this group of five men and two women all sing and play their own instruments. The group originally formed in Seattle before relocating to Provo sometime in the past couple of years, coming to our music scene with a pair of albums already under their belts and a deal with Deep Elm Records. Now, they're looking to conquer the Utah music scene with their third album, Blood Harmony, which has some pretty intricate singing and musicianship behind it. It's worth at least a listen. You can download the album off Bandcamp for a mere $5.

Switching to upcoming release shows, tomorrow night, we'll see three. The first two come to us from gLife, aka GeorgeLife, and Fleetwood, two of SLC's finest from the hi- hop community. They've been grooving together for some time now, supporting each other's shows and ventures, and now they're combining efforts in a big way, as they'll each be putting out a new album this Saturday: Fleetwood's latest EP, Saying Goodbye, and gLife's full-length album, All I Know. The two also will be performing together at Bar Deluxe this Saturday, along with DJ Baloo and Pookie, Black Socks, Jef Doogie and more to be named. Just $6, starting at 10 p.m. 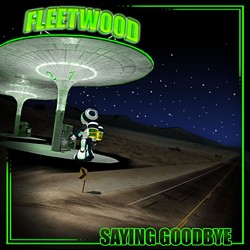 And then, finally, down in Provo, we'll see ... well, I'm not really sure. Chance Lewis, who always has something awesome happening on the 100 Block, has got a little something coming out of his wheelhouse called Allison Wonderland. It's described as a collaboration between local hip-hop artists Apt and Donnie Bonelli, but really this sounds more like an experiment in artistic hip-hop as they tear down the fourth wall and make it sound like you're being brought into the creative experience. At least, that's what their album, Wknd: A Mix EP, sounds like. You can judge for yourself at the release show happening Saturday night at Muse Music, as they play with Chance Lewis, Atheist and Q1 of Free Speech Syndicate, and The Crate Dwellers. $5, starting at 8.