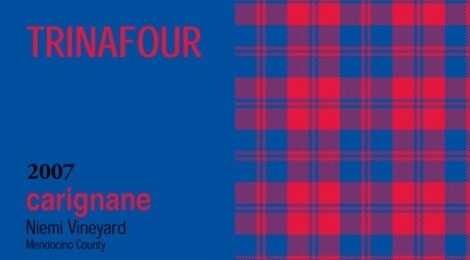 I ran into a wine-geek buddy of mine at the downtown wine store last week and said, "Show me something good and cheap!" He handed me a bottle of Trinafour Cellars 2009 Carignane, Niemi Vineyard --- ($15.99). I wound up bringing the bottle to drink with dinner at Ruth's Chris Steak House in Park City, and it was amazing.

Trinafour is owned by Alex MacGregor, who is also the winemaker. It's a small-production winery -- about 350 cases annually -- which is one reason the wines are so reasonably priced here. (Thanks to Utah's small-winery exemption.) MacGregor focuses primarily on Petite Sirah and Carignane, although he also makes a bit of Muscat Canelli.

This wine comes from Niemi Vineyard, in the middle of California's Russian River Valley. The Carignane is made with grapes from 60-year-old vines. The vineyard is dry-farmed and organic. It's an unfiltered wine, so there will be some sediment.

The 2009 Trinafour Carignane is elegant and sophisticated -- a very nuanced wine with soft tannins and a silky mouthfeel. It's deliciously juicy, brimming with bright cherry and anise flavors and a touch of spiciness. Git some!