Some City Weekly Music Awards showcases are a cohesively arranged array of local flavors designed to appeal to a particular musical palate. Others, like last night’s show at The Complex, are the culinary equivalent of shoving an entire fistful of jellybeans in your mouth with gleeful abandon: safely daring, a little unpredictable and sweetly surprising.---

The three-band lineup at The Complex started the evening tasting contemporary, featuring a strange but compelling combination of styles mixed liberally in the same simple four-piece (Spirit Master). The next course featured a hearty serving of saxophone and bongos, bringing the musical feel back a decade to when ska still represented the last remaining bastion of late 1990s alty-jam-rock (Marinade). The smooth finish came as a rich-but-petite serving of heavy synthesizers and 1980s vocals (Night Sweats).

A sort of local super group comprised of members of Mathematics Et Cetera, Band of Annuals and The Devil Whale, Spirit Master was in the unenviable position of playing the first set. Undeterred, the band rocked on with their bad selves, playing a genre-bending set that showed off the members’ technical abilities and predilection for noise of all kinds. I caught hints of math rock, contemporary drone and distortion, a touch of punk around the vocals and, as CW’s esteemed music editor and CWMA guru, Austen Diamond, pointed out, shoegaze. 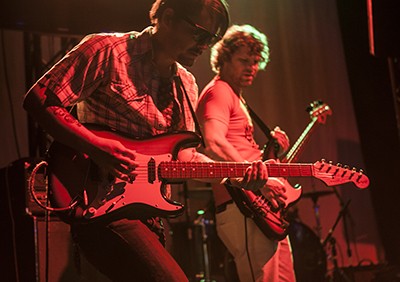 I’m not going to lie to you and pretend I know which songs Spirit Master played, though I’m listening to their Bandcamp right now and could probably give an educated guess. I will say this, though: Spirit Master has a unique style, an energetic stage presence and at least one badass sweater. Their best moments are found in mathy cacophony and angrily shouted swear words. If I can return to my jellybean metaphor, the band tastes like a mouthful of pear, popcorn and cinnamon. It’s weird, and you have to chew it for a while, but eventually you start to come around to the wild oscillation between cohesion and discord. 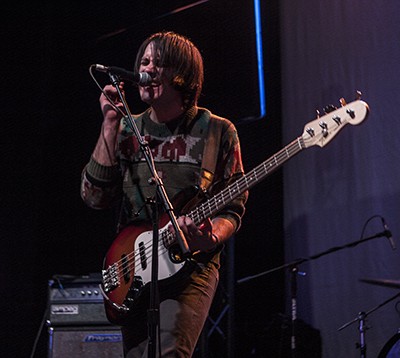 Next up was Marinade (pictured below). The jellybean people don’t make a jerk-chicken jellybean, but if they did I would declare it the flavor of the band. But remember, we ate a whole fistful of jellybeans -- no sorting, no carefully crafted ratios to create specific, non-jelly flavors. The tastes range from a reggae-infused jerk chicken and tropical fruit to the incense your first boyfriend burned while you made out to Sublime. 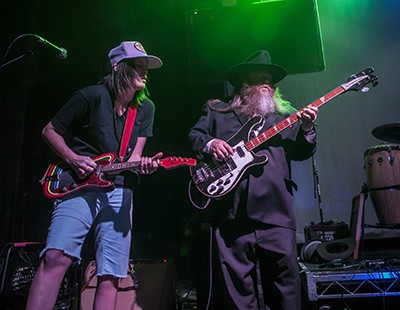 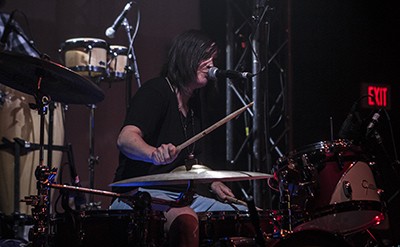 Last, but definitely not least, Night Sweats took the stage. The crowd had nearly vanished after Marinade (more on that in a minute), but the loss was theirs. Night Sweats was easily my favorite band of the night: heavy, concentrated synthesizers and drum machines with a lead singer who seems to have been beamed in straight from the soundtrack of a John Hughes movie. 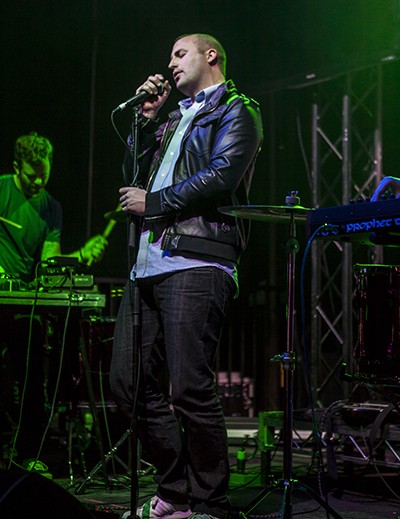 The six-piece feels deeply in sync. It’s hard to get such a large group to play with one voice, and once you do that the band has to keep from sounding too droney. Night Sweats walks this balance impressively. The sound is as solid as a tidal wave, but synth and guitar flourishes keep the sound from becoming monotonous. Night Sweat’s use of drum machines doesn’t feel like a cop-out, it feels like the horizon in a landscape painting: unobtrusive, but necessary for completing the picture. (It helps that each of the synth players have a drum of their own to keep the beat interesting.) Dark but danceable, Night Sweats are an unapologetic ‘80s throwback band that still manages to feel fresh. As it was past midnight on a Thursday and the majority of the crowd disappeared, the group didn’t play a full set, but promised that the few songs they did play would be their best. They didn’t disappoint in that regard. 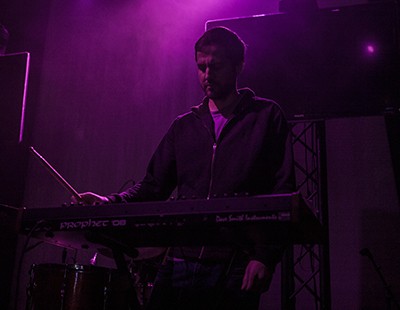 Night Sweats tastes like smudged eyeliner and cocaine washed down with cheap gin. Is that a jellybean flavor? No? Maybe it should be.

Which in some ways brings me to something I touched on above, albeit awkwardly. This is the second CWMA showcase I’ve been to this year, and at both shows over half the audience bailed after the second set. The bands have worked hard to get where they are—they were nominated by CW for their talent, drive and what they bring to the grand buffet table (or drug-laced jellybean bag) of the Salt Lake City music scene. It’s really great to have your friends nominated, and you have every right to be excited for them, to show up and vote. In fact, I wholeheartedly encourage it. But I also would encourage you, the audience, to stay for at least the first song or two of the band immediately after your friends. I know it’s late on a Thursday, and that’s hard. I know you have other things to do, like go congratulate your friends some more and vote for them 50 times on the City Weekly website. That’s cool, but remember that the band coming on after your buddies also worked really hard to be where they are. Just like your friends, who are awesome, CW staff nominated them because they thought they deserved to be there. Seriously, hang around for the extra 15 minutes--you might discover another great local band, or you might discover a new object of deep musical loathing. You’ll never know unless you try.